I had this published over at MarketWatch today. It’s titled, “Mexican Stocks Soar To Historic Highs ”. Here is an excerpt:

While the media and frustrated U.S. stock market participants worry about the ongoing negotiations in Washington, we’ll focus our attention on the areas around the globe that are already working.

In case you hadn’t noticed, Mexico is off the charts. Literally. The iShares MSCI Mexico Investable Market Index ($EWW) broke out this fall to all-time highs and does not appear to be slowing down. This ETF seeks to provide investment results that correspond generally to the price and yield performance of publicly traded securities in the Mexican market. Some of the names in the basket include Telecom service provider America Movil, Walmart De Mexico, Grupo Televisa and Coca-Cola FEMSA.

There has been a clear level of resistance in the mid-60s for this ETF that dates back to the summer of 2007. The market failed to break out from those levels, even after trying for almost a year after initially reaching that ceiling. As a result, Mexico was absolutely decimated in the equities crash of 2008, losing over 65% of its value. This particular ETF, however, managed to then triple off the early 2009 lows. Meanwhile, the widely followed S&P 500 and Dow Jones Industrial Average merely doubled during that very same period. 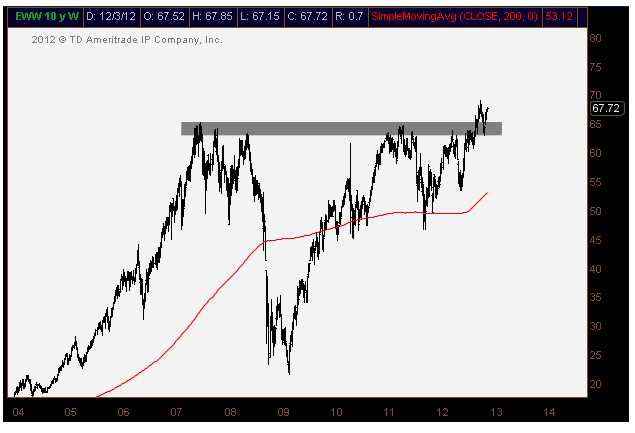 Most recently, Mexico has taken out, not just last year’s highs, but also the previous all-time highs from back in 2007. These all-important levels in the mid-60s, that served as resistance for over five years, are now proving to be newfound support. During the global correction in equities that sent many stock markets down into mid-November, Mexico managed to successfully retest that breakout level from September. This reiterates to us not only how important this level is to the index, but also validates the breakout that we saw a few months ago.