Wednesday afternoon I had a nice little back and forth about the markets with my friends Phil Pearlman and Josh Brown using Google Hangout. We discussed the Apple earnings, the Netflix rally, and then some of our favorite trades. I know I might be boring and everything because I don’t tell sexy stories, but my vote was for a the continuation of the precious metals vs miners pair.

Last summer I wrote a post about the long-term trend in this beast, and it continues to work through today. The argument might be that we just don’t need gold mining stocks as a vehicle to get long gold since we now have the $GLD, one of the biggest ETFs on the planet. At the end of the day it doesn’t matter why, but the $GLD:$GDX pair continues to work.

Here’s the chart going back a couple of years: 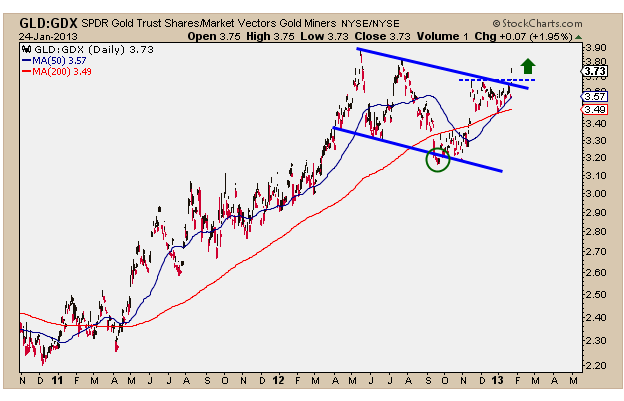 I think it’s pretty clear that the pair is breaking out to the upside above a pretty standard flag/downtrend channel. This week the pair also took out the horizontal resistance going back to this Fall.

Fueling the breakout was that false breakdown in September (circled in Green), along with upward sloping 50 & 200 day moving averages. The first measured move is probably somewhere around 4.10 based on the height of the channel. There should be should be some horizontal resistance left from those two peaks in July at 3.80 and May at 3.90. We’ll be watching the pair’s reaction to those areas to see if they consolidate nicely in order to add.

Risk management-wise, we’re watching this horizontal resistance that was broken this week. We definitely want to see them hold on to that for this breakout to be valid.

The leader in this metals vs miners world has to be the Platinum vs Junior Miners pair. If you can stomach the volatility, this has certainly been the better one. But if you can’t, I would at least watch $PPLT:$GDXJ as a guide for the more conservative pair. Either way, I think they just make sense. And the best part, to me, is the lack of correlation with anything else. This one is in a world of its own. We love that.