I’m not hearing a lot of chatter out there about the infamous yellow metal. You see, when Gold is making all-time highs, it’s all that everyone likes to talk about. But when it’s in the process consolidating those gains, market participants and the media get bored with it. Gold apparently loses its sex appeal when it doesn’t do anything.

Fortunately for those paying attention, corrections like this present a nice opportunity to jump on one of the strongest, most powerful trends on earth. It’s no secret that the price of Gold has been rising for over a decade, both on an absolute basis and also relative to Stocks. But sometimes people forget and rather focus their attention on disastrous social media offerings. They’re much sexier I suppose.

The thing is that stocks are like us humans in some ways. We get tired at times. There is no way we can just sprint and sprint and go on forever. At some point, we need to stop racing, settle down, relax, and take a nap. Stocks, commodities, and other securities behave the same way. And I think this is exactly what we’re seeing in the price of Gold.

Look at this chart below. It’s a weekly line chart of the Gold Exchange Traded Fund ($GLD): 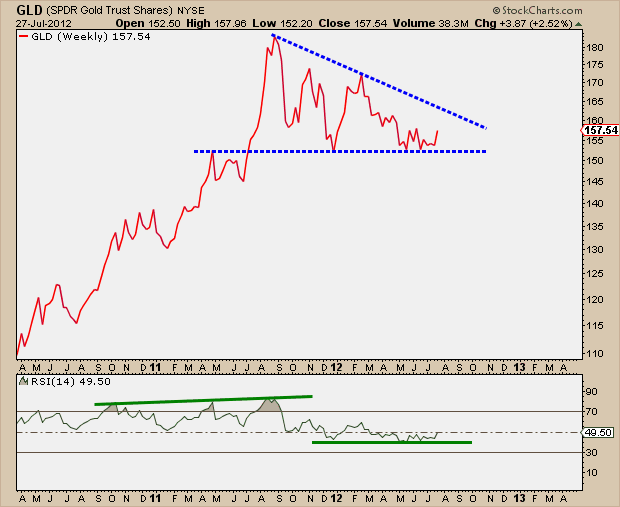 Since the parabolic move in the 3rd quarter of 2011, gold prices have been consolidating in what appears to be a healthy normal correction. We’re going on 10 months now of coiling action that should see a resolution soon. The former resistance in April of last year near $150 has turned into support since December. We know right off the bat that a weekly breakdown below 150 would probably lead to a much longer correction and lower prices. But a break above the downtrend line from last September’s top should lead to a much higher prices for the 2nd half of the year.

The trend here has been higher for a long long time, so we’re still giving the benefit of the doubt to the bulls. Innocent until proven guilty, if you will. And our momentum indicator, RSI, agrees with that. First of all, the higher highs in RSI confirmed the higher highs in price throughout last year without showing any bearish divergences. Secondly, support was found in momentum well above 30, never showing any oversold readings. These are both signs of a security still in bull mode.

All of these are bullish characteristics that lead us to believe that higher prices are here to come for Gold. But discipline is the key. If we get down below 150, this isn’t an area where we want to be for the near-term. But as long as we stay above it, we like it to $180, $200, and beyond.