This concept of new 52-week highs can be somewhat confusing. I get it. How does it work? If we make new highs and the list of new highs doesn’t confirm, do we short everything? How do we know if and when the internals of the market have confirmed or diverged from whatever the price of the index itself is doing? These days, it seems like people have more questions than answers. So today we’ll take a look at what’s going on and see if we can try to work through it together.

This is a chart of the S&P500 going out on Thursday at new all-time highs. This was the highest daily closing price in the history of the S&P500 on the day after it had its highest monthly close in history. A lot of records were broken this week, which some might consider to be a positive. But you still have your frustrated bears out there trying to hang on to whatever self esteem they believe they have left. They point to the “internals” as the reason they “will” be right “one day”.

I’m not sure I see it as bearish though. We’re breaking out in the S&P500 above the upper end of this consolidation from the past 3 months. This is perfectly normal as consolidations tend to resolve themselves in the direction of the underlying trend, which in the case of the S&P500 is obviously up. Meanwhile, the list of stocks in the S&P500 also making new highs broke out yesterday to the highest level since those March highs: 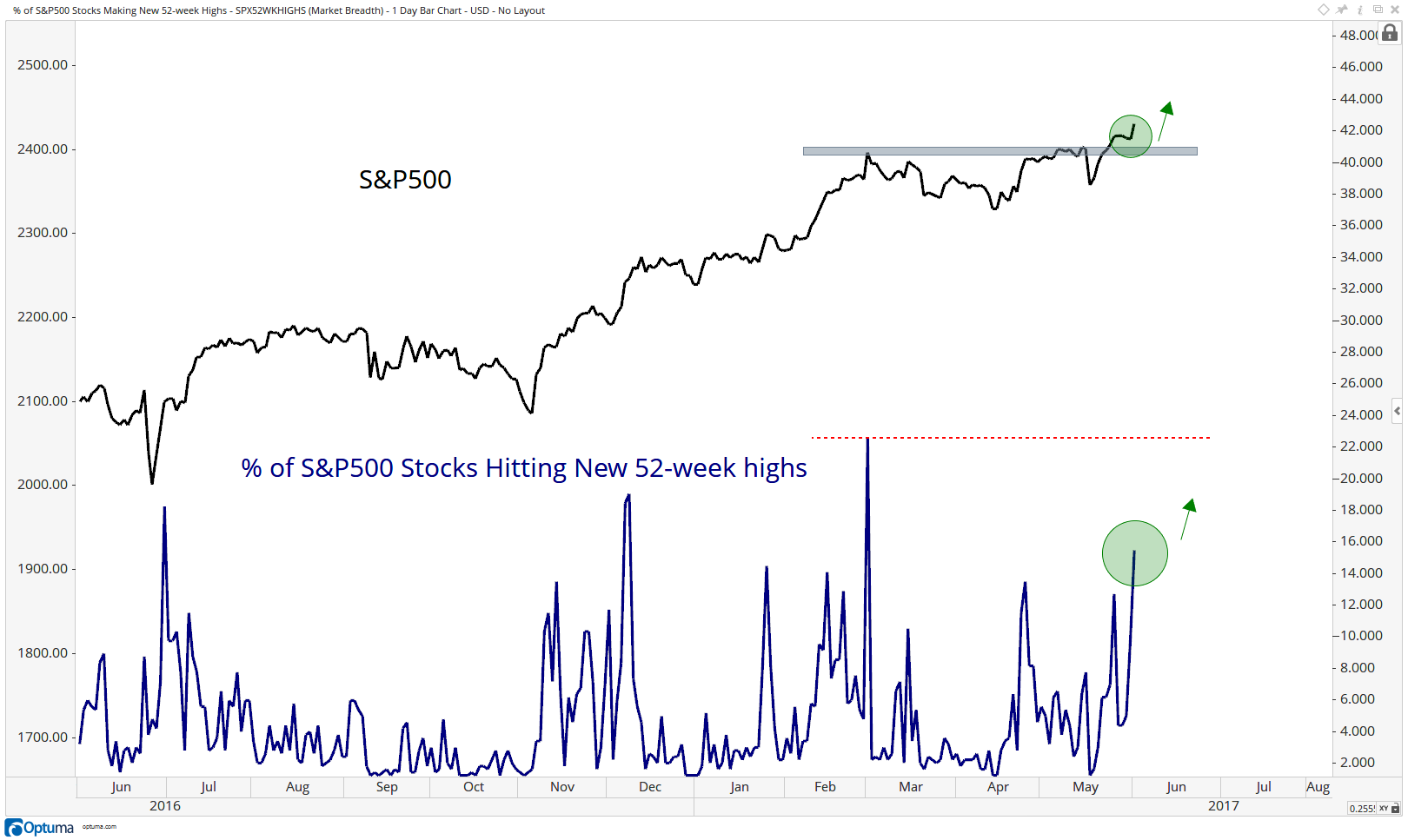 I see them both still rising. Remember, internals analysis is not for execution purposes. We don’t use this tool for better entry and exit points. This exercise is more of an “after the fact” look back at how internals behaved along with price. It’s a lagging indicator. Since both the S&P500 and the list of stocks in the S&P500 hitting new 52-week highs are both rising, we don’t have any pivot points to suggest there is any kind of divergence, yet.

So where do we go from here? Well, if the S&P500 hypothetically were to roll over and break back below the March highs, then yes, we would have weakening breadth measures since S&Ps hit new highs while the list of stocks hitting new highs did not. Based on the weight of the evidence, however, I would expect this divergence scenario to be the lower probability outcome.

What I imagine is happening here is that US Stocks are resolving this 3 month consolidation higher, which is not only perfectly normal, but should be expected considering we are in an uptrend. As S&Ps continue higher, which is what I expect, the list of stocks in the index hitting new 52-week highs should also expand and take out the early March levels. This is what we’re positioned for right now.

If the data changes or something here does not go the way I expect it to, I will be the first one to raise my hand and tell you breadth is weakening. Remember, I don’t care if the S&P500 doubles from here or gets cut in half. I stopped caring about this sort of thing along time ago. Any future economic implications are out of my control. I’m just trying to take advantage of any changes in price. Right now, it seems best to continue to expect higher prices. The internals will eventually catch up, and if they don’t, then, and only then, will we worry about it. At this point, I see nothing in the chart to be concerned about. To the contrary, the behavior seems perfectly normal.

PS – If you’re not already a Member, Start your 30-day Risk Free trial to get updates on these charts