One of the most classic characteristics of markets that are not trending higher is when momentum is getting oversold. Markets in uptrends don’t get oversold. They get overbought! Think about it: How can an overwhelming amount of buyers possibly be a bad thing?

I understand there are some strategies that wait for oversold conditions in their indicators to trigger buying opportunities and other things like that. That’s cool. But when I am referring to momentum, I am specifically describing a 14-period RSI. For today’s discussion we’ll focus more on 14-day RSI for this specific timeframe. If we were having a longer-term conversation, we would be looking at a 14-week RSI on a chart that goes back decades. Currently, the weekly chart is in a bullish range, so that is not in question. Today we’re focused on the coming months and quarters.

The Relative Strength Index (or RSI) is a momentum Oscillator. All that means is that it ranges from 0 to 100. Oversold conditions are when RSI falls below 30, and over bought conditions are when RSI gets above 70. While other people use different momentum indicators, RSI is the one for me. See Momentum in Allstarcharts EDU. Even if you use other momentum indicators, the one thing I will encourage is to stick to one or 2 at most. Less is more, trust me. Price is the most important thing anyway, so why add additional supplements for the same purpose.

In 2015, one of the reasons I was so bearish was because momentum hit oversold conditions in the S&P500 during the August decline. It became very clear at that point that we needed to sell into strength, not buy into weakness. The trend had clearly changed when prices broke that 2040 support that had been in place since February. Momentum confirmed that. The following January, momentum hit oversold conditions once again, but on the February low, RSI put in a bullish divergence. This was the first bullish signal that momentum had given us. 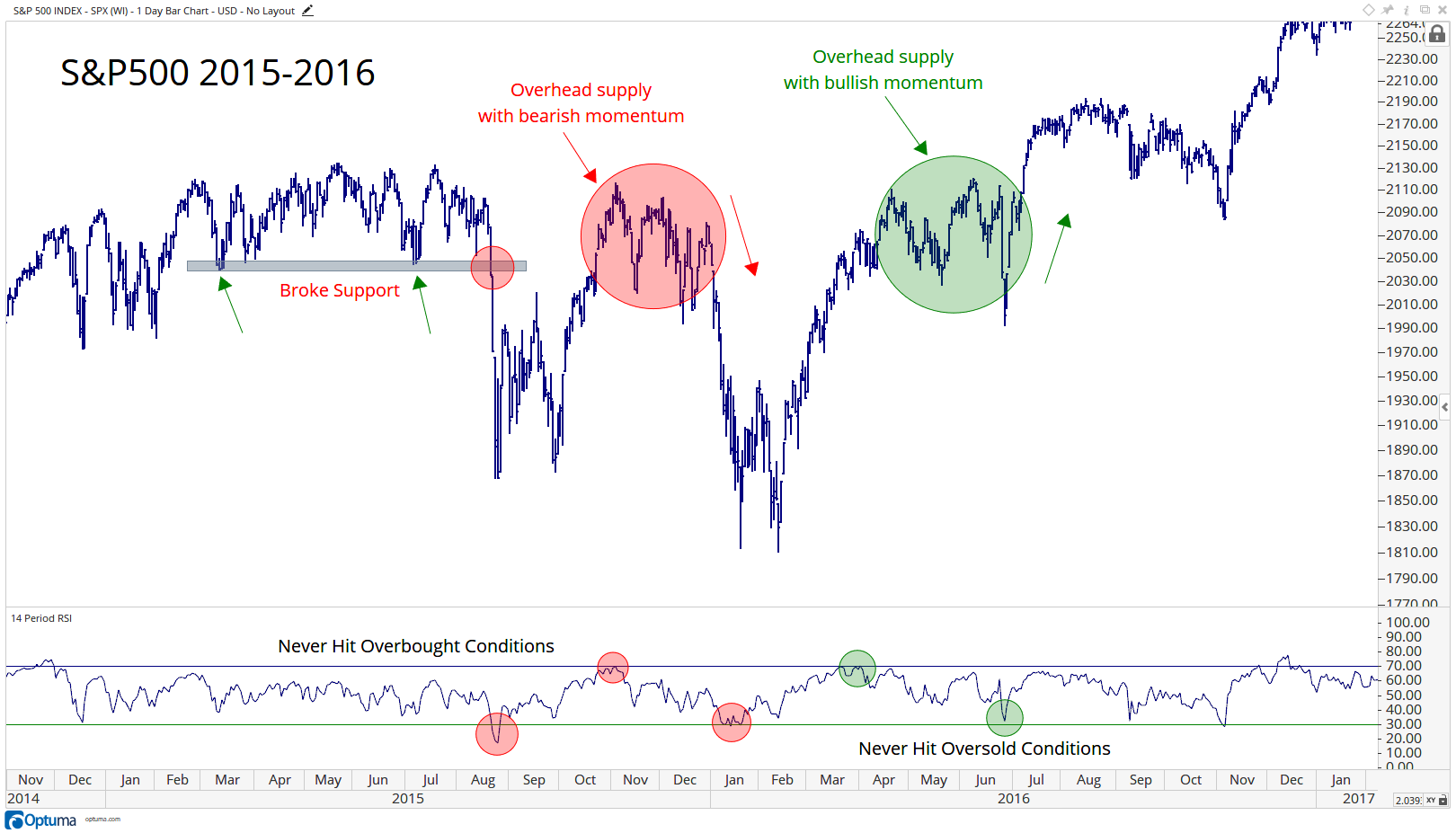 Hitting overbought conditions in April 2016 was then next bullish signal, confirming that we were on the right side of the trend. And finally at the July lows when momentum stayed above oversold conditions, it confirmed everything we had already been seeing prior, giving us the green light of a new trend from a bigger picture perspective, not just a counter-trend rally.

While it was clear to get long stocks early in the first quarter 2016, it still did not answer the questions of whether or not this was just cyclical rally within a bigger downtrend, or the start of something bigger to the upside. The strength in momentum during the Summer correction gave us the signal that it was something much bigger. We could then position accordingly. Also let me stress that the oversold conditions in 2015 were showing up all over the Major U.S. indexes, US sectors and foreign indexes and sectors. It wasn’t just one chart, it was all of them.

Today we haven’t see anything of this. But I think it’s important that you understand the thought process. We have not seen any oversold conditions in the market whatsoever. If they start to show up in the major indexes and/or sectors then we have more reason to be cautious and/or bearish. While it won’t tell us whether we should expect a short-term correction or if it’s the start of something bigger, it would suggest we are entering a sell into strength market, not a buy into weakness environment. As we get more data from there we can decide whether this is the start of a bigger decline or just a correction within a monster uptrend.

Another good example was the S&P500 in November of last year when RSI hit oversold conditions. That was evidence of some weakness for sure. But the overbought conditions later that month invalidated any bearish thesis that could have developed from it. That suggested to us that this strength, while obviously bullish, was actually part of something bigger taking place in the market.

If stocks are able to withstand this correction and remain above oversold conditions, that would be incredibly impressive. If we were to fall below 30 in RSI, then we would look at those stocks or sectors as sell strength markets. We can also look to those indexes, sectors and stocks that don’t get oversold while other do as the leaders showing relative strength. At those November lows, you’ll notice that the stocks and sectors that did not hit oversold conditions were the strongest ones, Regional Banks for example $KRE.

For now we don’t have any oversold conditions anywhere. Like not even one. But it’s important to identify what the market would look like in an environment where stocks are going down, not up like we’ve been accustomed to the past 18 months. Momentum hitting oversold conditions is one of the biggest things we’ll be looking out for.

If you’d like updates on all of this above, I encourage you to start a 30 day Risk Free trial to my research.