The US Dollar trading at key levels against a significant amount of Developed and Emerging Market currencies is the major theme in Currency Markets right now.

The GBP/USD is challenging an area of resistance that acted as support for over two decades but has been a barrier for prices since the Brexit vote almost 5 years ago.

The USD/CHF is on the verge of completing a massive 9-year top.

And USD/CAD is currently attempting to complete a 5-year double top… with a pattern that looks strikingly similar to that of the DXY Index itself.

But these charts are indicating what’s likely to play out over a more structural timeframe… What about the next few weeks and months?

A near-term bounce in the US Dollar makes sense when you consider what we believe is a high likelihood of a potential bond rally and a burgeoning rotation out of the more economically sensitive base metals into the more defensive precious metals.

But first, the USD has to stop dropping against the leading emerging market currencies.

Recently, we’ve highlighted Dollar weakness against the South African Rand, the Brazilian Real, and the BRICS Currencies in general.

Here’s a weekly chart of the USD/RUB: 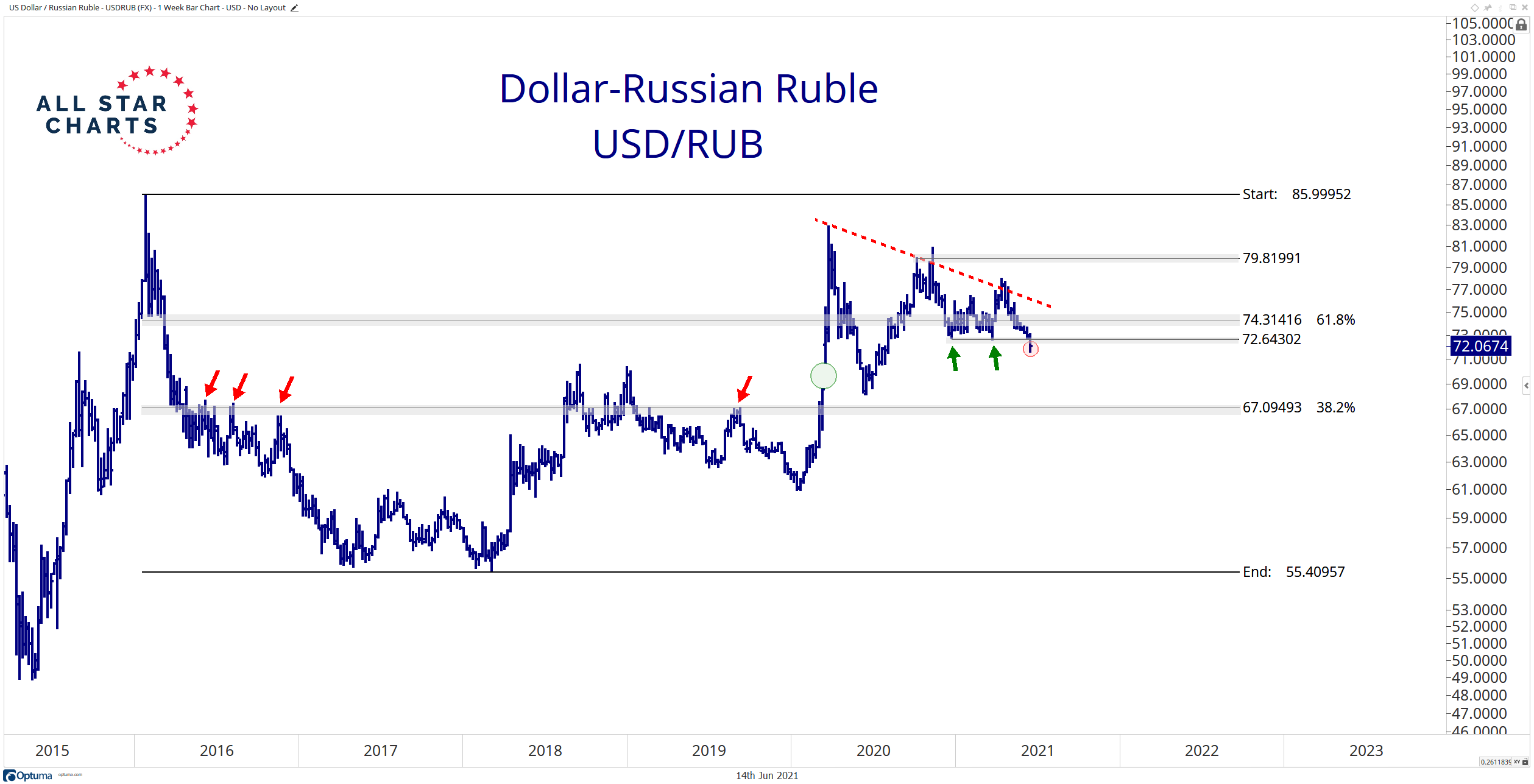 USD/RUB breaking to new lows is not what we would expect to see in the face of a USD rally. But that’s exactly what happened last week as the USD/RUB cross broke to its lowest level since last summer.

It’s possible USD/RUB could be in the early stages of forming a half-decade double-top pattern. Regardless, we can be short the USD/RUB cross as long as we’re below the March lows near 72.65 with a tactical downside target of 67.10.

On the other hand, what if we’re wrong!?

Under that scenario, we’d be looking at a failed breakdown instead. Could this happen? Absolutely!

In fact, it’s exactly what we’d expect to happen if the Dollar Index is to make a counter-trend move back toward 93… or even 91.50. 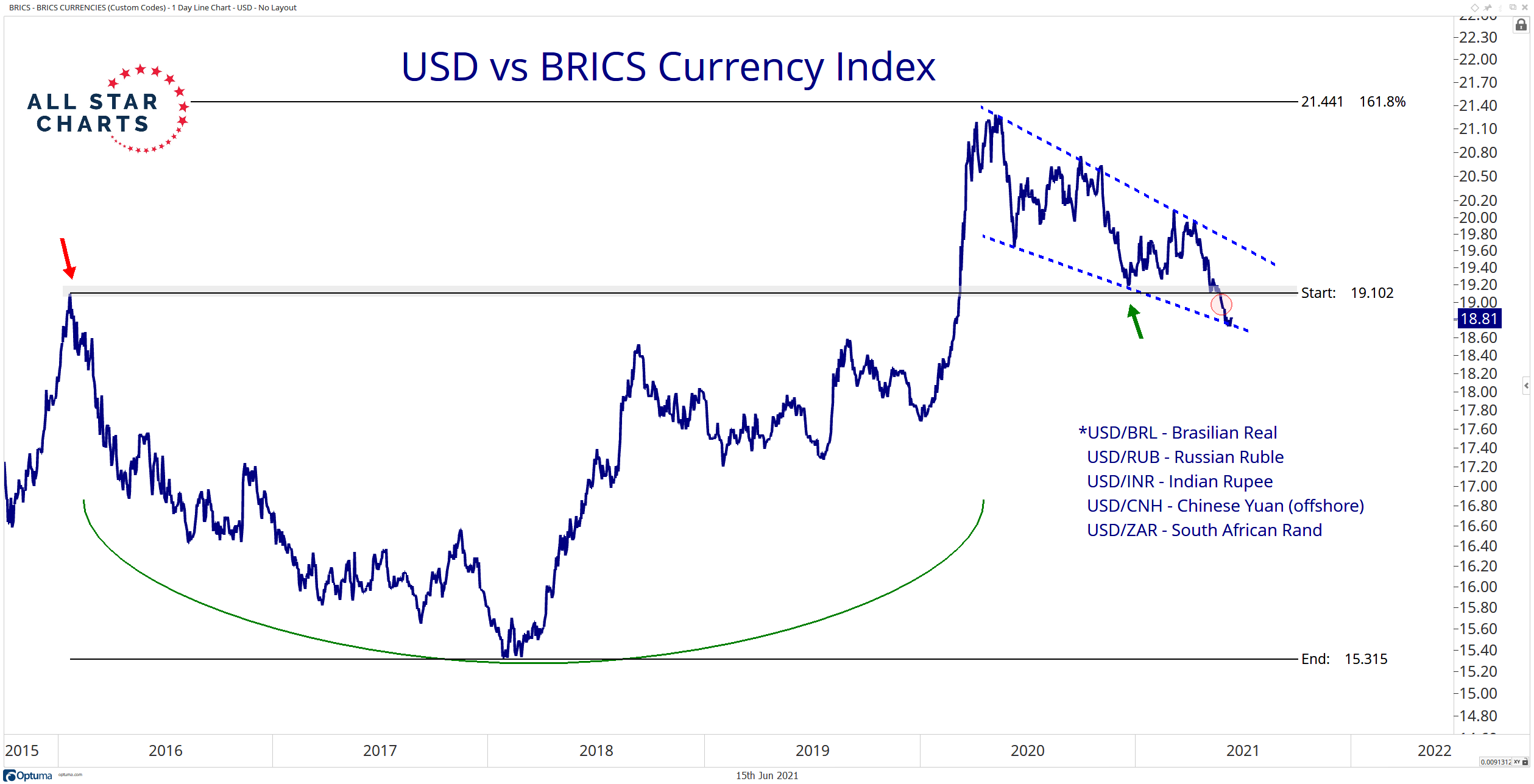 Expect our custom USD/BRICS Index to reclaim its breakdown level just above 19.

And how about USD/CAD taking its sweet time to follow through to the downside and confirm this major double top: 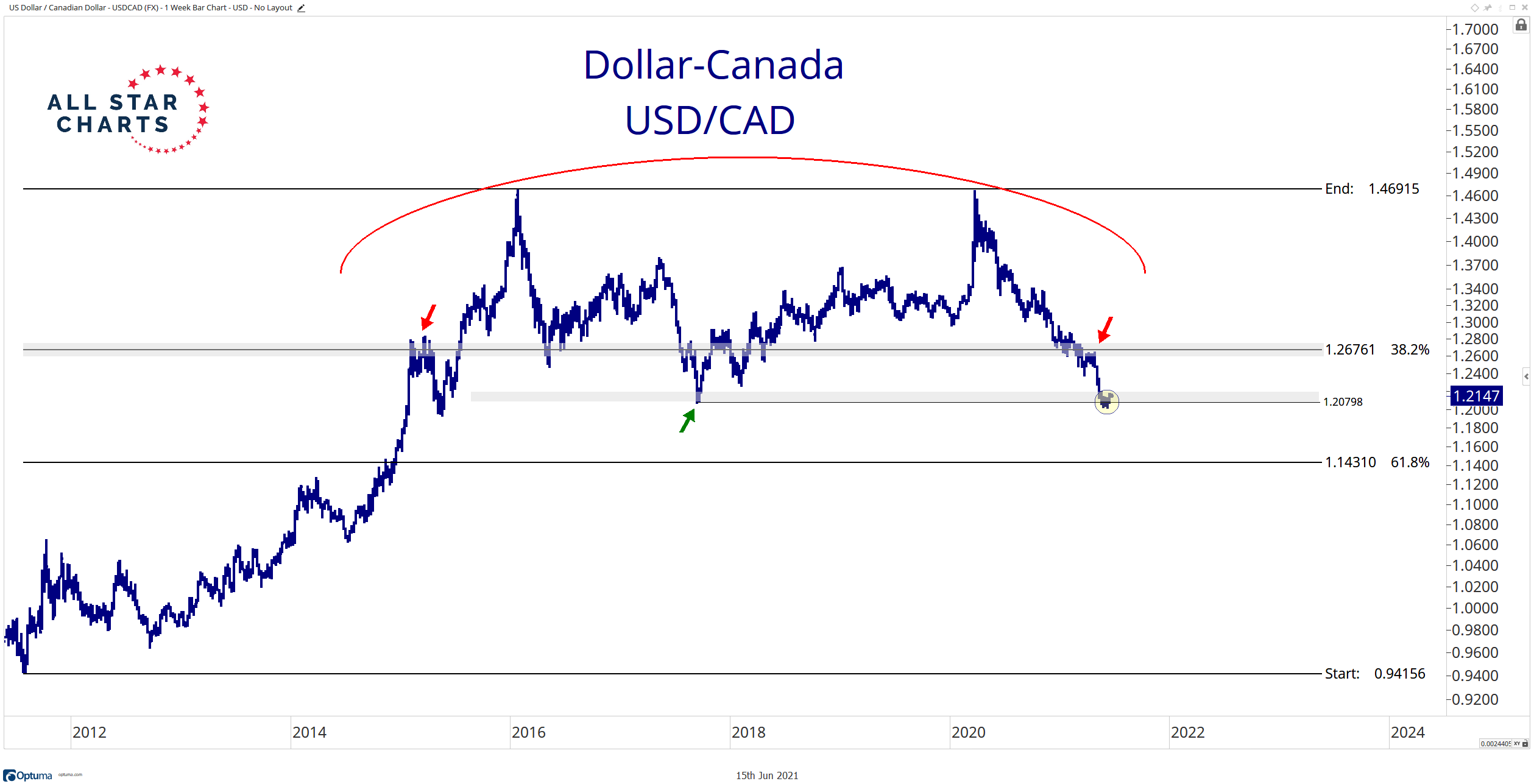 If and when these developments actually take place, we’ll be on close watch for the momentum and strength behind these reversion moves as that will give us information into how serious and long of a dollar rebound we’re likely to be in for.

But over the past few weeks, the writing has certainly been on the wall…

As you’ll see in our performance table on page one of our Currency Report, USD outperformed most currencies in our universe last week. The worst performers were the Brazilian Real and South African Rand. As for Developed Markets, the biggest laggards were classic risk-on currencies like the Aussie Dollar and CAD.

Seeing this recent Dollar strength concentrated in the more risk-on pairs is exactly what we would expect to see if USD is going to gain any material ground and put a damper on risk assets in the coming weeks and months.

With the near-term weakness from Lumber, Copper, and other traditional risk assets, maybe this development is already underway…?

Premium Members, be sure to check out this week’s Currency Report below.