The best part about my job is that I don’t have to care in which direction any market goes. The US stock market could double or it can get cut in half and I couldn’t care less either way. Obviously as a member of society I want everything to be good and the market to go up forever. But at work, I can’t think that way. So I approach each market from a completely unbiased perspective. In fact, I constantly question myself and try to come up with reasons that counter what I’m thinking.

Today I want to look at shares of Apple from a completely neutral perspective. Because I don’t care if Apple goes to 200 or zero. Some people are big fans and don’t like negative things said about their favorite stocks. But fortunately I’m not one of those. So we are going to take a look at this thing from a bird’s-eye view and then work our way down. The first chart shows the weekly candlesticks going back 5 years with momentum plotted below. We’ll us a 14-week RSI: 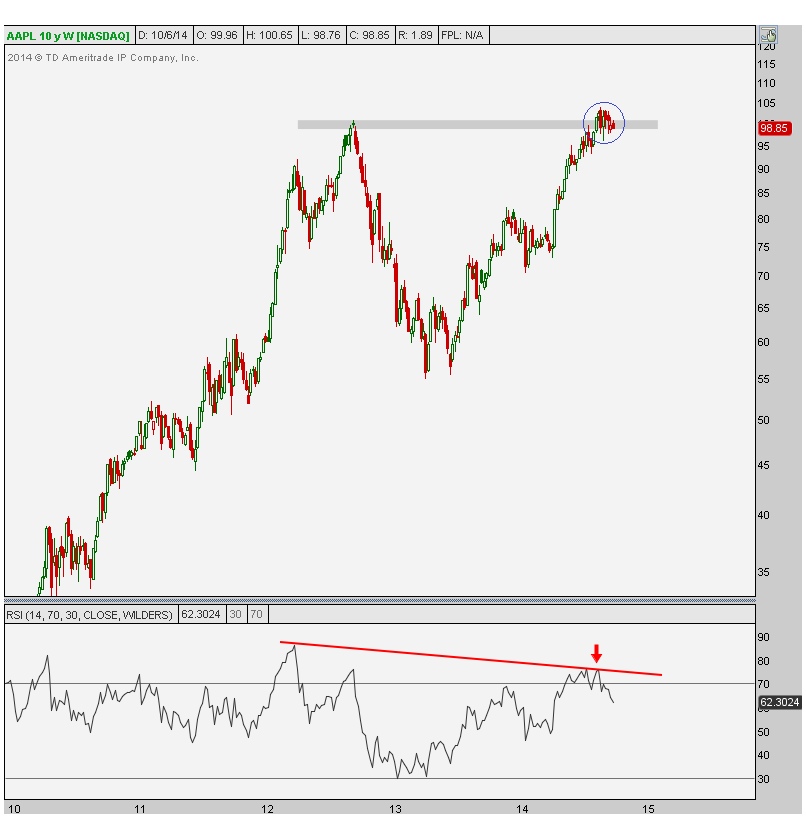 Look how prices are consolidating in this ever-so-tight range just above the former all-time highs from 2012 (see here). The good news is that we are still holding above that former resistance. The bad news is that if it breaks down out of this range, we’ll have a confirmed failed breakout. This would also confirm a bearish divergence in momentum as RSI failed to put in new highs when price did this summer. Most importantly this is on a weekly timeframe which would have the biggest downside consequences.

Now that we know what could happen structurally if this breaks down, we will look at the daily chart for a closer look at this pattern. We’re looking at a candlestick chart with a 14-day RSI to measure momentum. It is clear that over the past 6 weeks we’ve been stuck in this symmetrical triangle well-defined by these two converging trendlines. These patterns are typically continuation patterns by nature, which is good since this is an uptrend. However, when what is supposed to be a bullish pattern, breaks down rather than up, the market is telling us there are larger forces at work. In those cases we should listen. 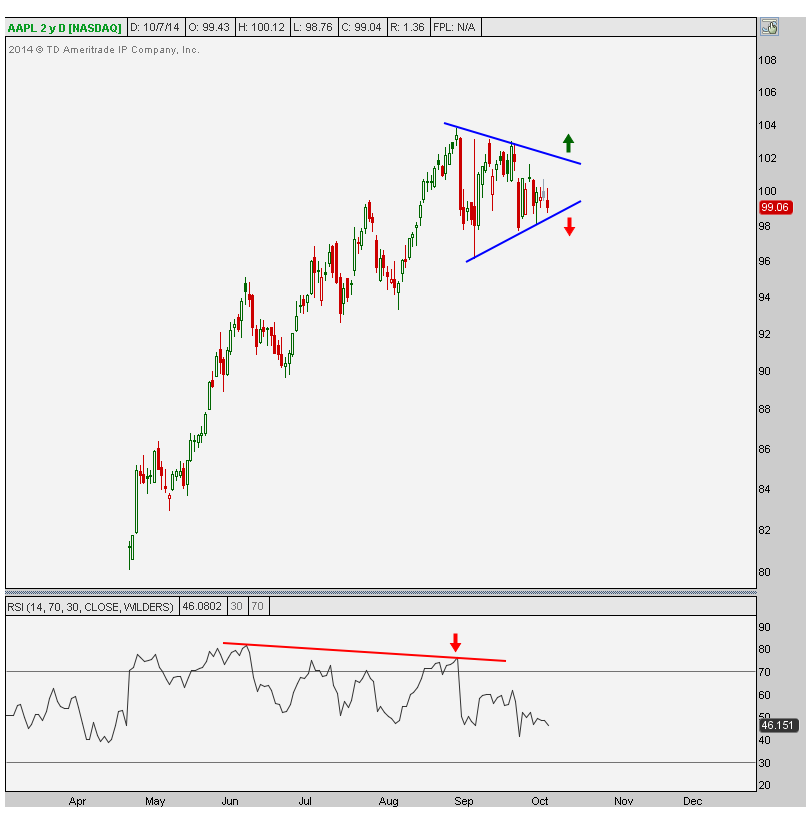 So if Apple breaks out, we can be in for a monster ride to the upside. That’s great. The problem I see is that it’s taking too long to resolve itself. This is usually warning number one that this “bullish symmetrical triangle” isn’t that at all. You want the market to have symmetry. Consolidations should match with the size of the previous trend. In this case, we should be, at the very least, near the upper of the two trendlines. We’re actually towards the bottom of the range and it will take an immediate rally this week back towards 101.50 to invalidate any of these bearish characteristics mentioned in this paragraph. But I truly think that is the lower probability outcome here.

We know based on the weekly chart, that a breakdown from this pattern would have major bearish consequences on the larger and more important timeframe. So the resolution from this short-term range is what we’re waiting for; and I think it comes very soon.

Moving on to the relative chart, we are seeing similar bearish divergences at these new highs. This is a line chart comparing Apple to the S&P500. Notice how during the entire uptrend this summer momentum was negatively diverging. This is another bearish characteristic that we also saw at the 2012 highs. I don’t like to see that if I’m trying to own/buy a stock. A break of this uptrend line would confirm what momentum is warning us about. 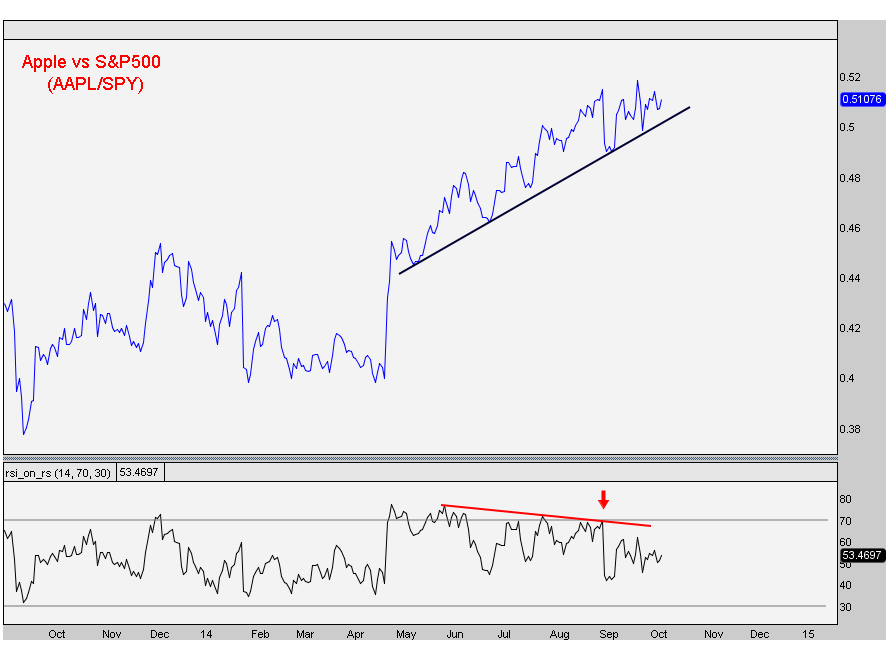 So the weight-of-the-evidence suggests that Apple is probably in a lot of trouble. The downside can be at least 10-15% easily, which for a company this size would be equivalent to losing about $90 Billion in value. After that I couldn’t tell you where we go, we would just have to keep reevaluating. The resolution out of this pattern is going to be big for Apple. I don’t care either way, but I think it breaks down. Upon confirmation we will act accordingly and try to take advantage of as much downside as possible. An upside resolution can certainly happen, anything can, but I think this is the lower probability outcome. I would argue that it would be extremely bullish, just unlikely.

Members of Eagle Bay Solutions receive updates on our charts every week on multiple timeframes. Make sure to check out our different packages to see which one is best for you.