What started out as a potential bullish continuation pattern in the US Dollar Index $DXY has turned into a near-term top.

After weeks of failing to hold breakouts on an individual currency basis, the tight coil in the DXY finally resolved lower.

The brief reprieve in USD strength was immediately felt across markets last week, with cyclical/value stocks and procyclical commodities catching an aggressive bid.

Now that the headwinds associated with dollar strength appear to be easing, will risk assets enjoy a tailwind in the form of sustained USD weakness?

Or was this just the latest fake-out from the DXY?

Let’s take a look at a couple of charts and highlight the levels we’re watching in the coming weeks and months.

First up is the US Dollar Index: 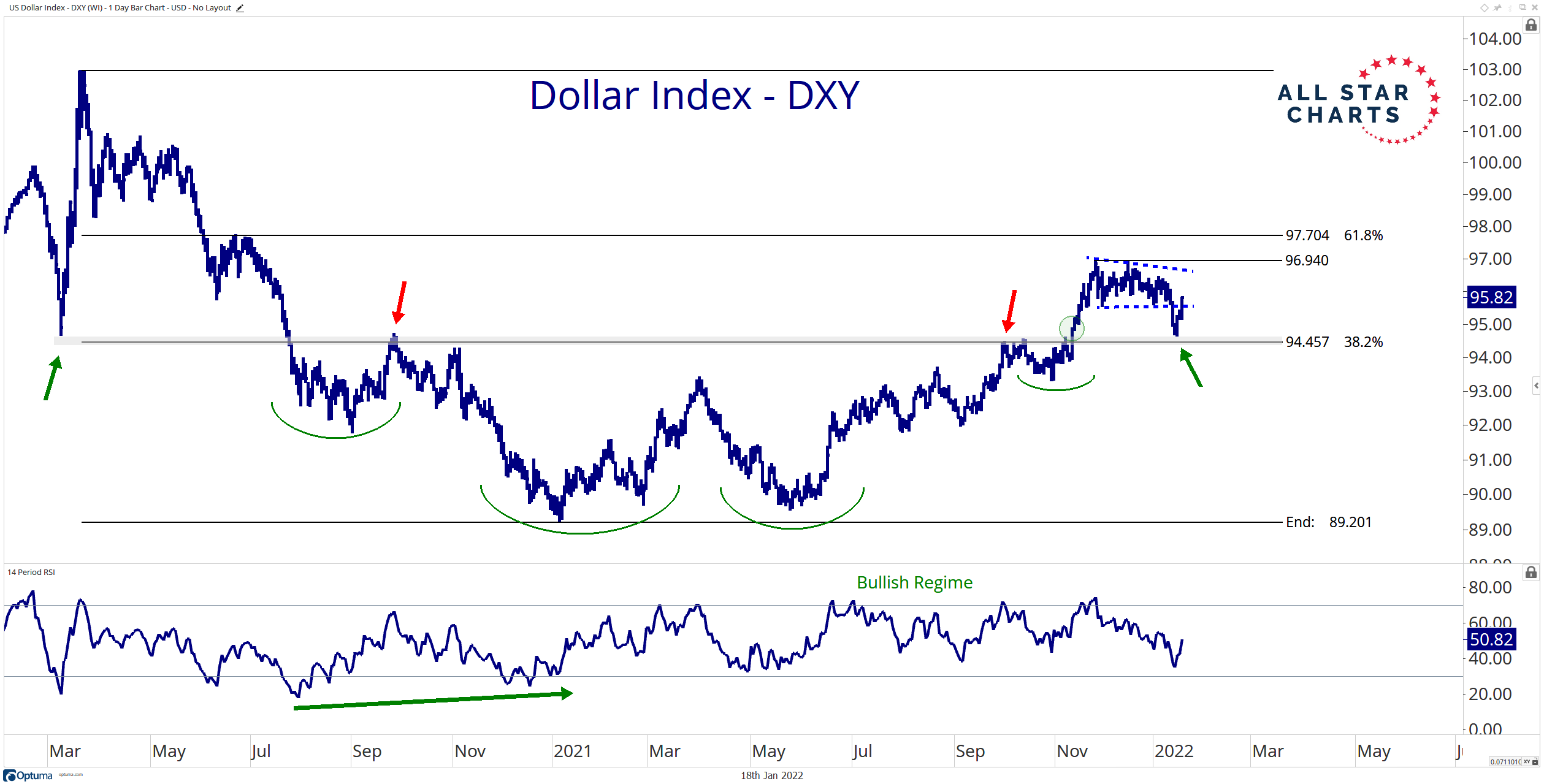 After the continuation pattern failed last week, the DXY reversed and retested its breakout level from the 12-month base it completed last fall. This was a logical level to find support – and that’s exactly what it did!

So, are we looking at a failed short-term continuation pattern or a successful retest of a larger basing formation?

It could even be both, in which case DXY just moves sideways in its current range.

The bottom line is that it’s a mess as long as it’s between the November pivot high around 96.94 and the base breakout level around 94.50.

If we’re between those levels, the bias is sideways. But we still have to lean in the direction of the underlying trend, which is higher.

A break above the recent pivot high would add to our conviction and would likely put pressure on stocks and commodities.

On the other hand, the bias is sideways to lower if the DXY slips back below 94.50 and into its prior range. We could see sustained USD weakness and the tailwinds associated with it below this key level.

For now, the best course of action is to wait and see, as the DXY is rebounding aggressively off the highs from last fall.

One cross we want to keep a close eye on for a leading signal is the EUR/USD: 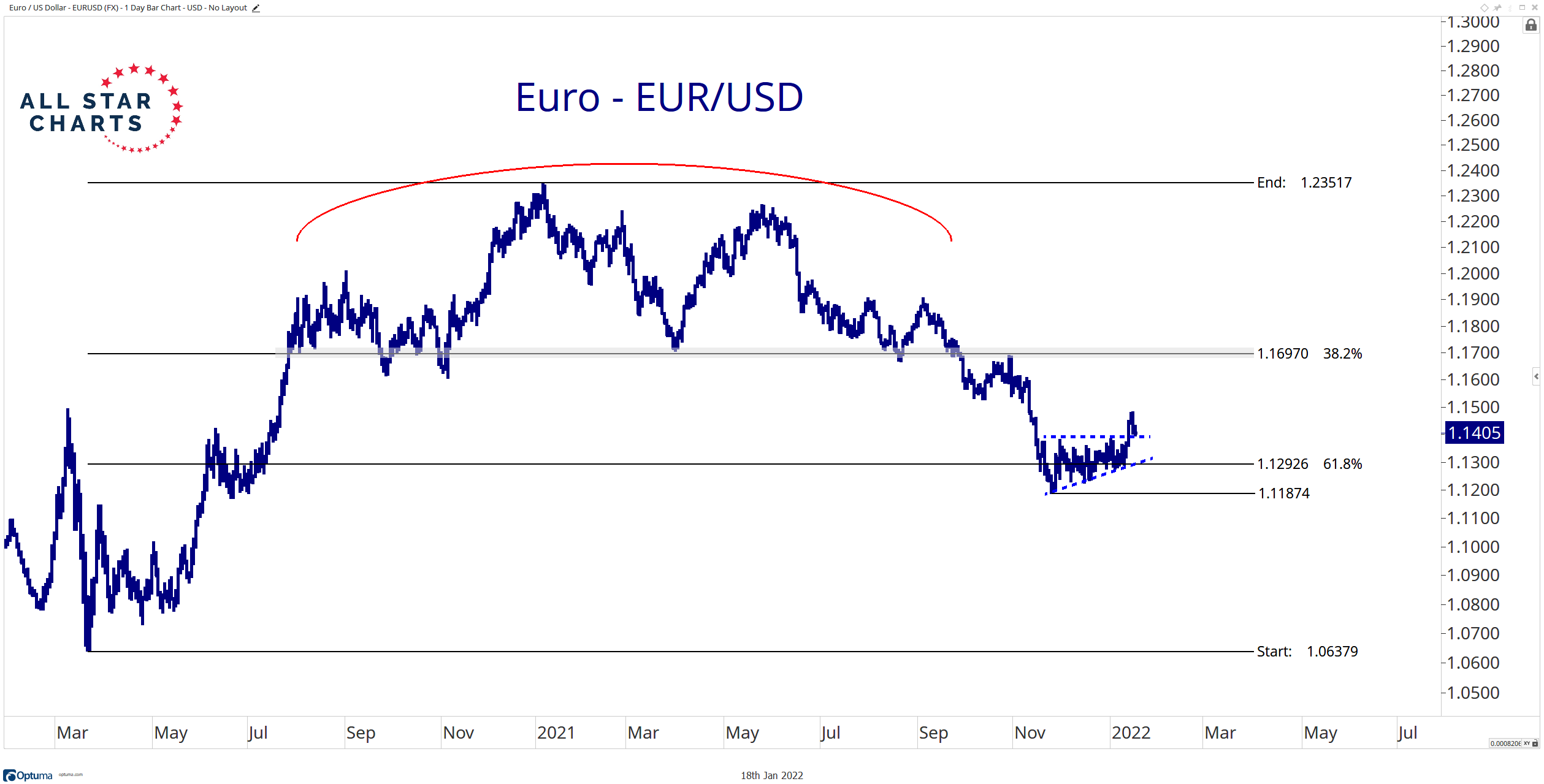 Since the euro comprises more than 50% of the US Dollar Index, the two charts are almost mirror images.

We expected the continuation patterns in the DXY and the EUR/USD to resolve at the same time but in opposite directions.

But, now that the DXY is finding support and bouncing higher, the EUR/USD pair is beginning to pull back. As we write, both charts are reclaiming the trigger levels of their recent continuation patterns. This raises the question of whether these were valid resolutions.

For the euro, we can continue to trade against the key retracement level around 1.1292. We want to be long if and only if it’s above that critical level with a target near the October pivot highs around 1.1690.

On the flip side, if it’s below that level, not only can we not trade the EUR/USD from the long side. But we have to imagine USD headwinds are beginning to pick back up.

The dollar has been one of the more frustrating trades these past few years. And, based on the recent action, that doesn’t look like it’s changing.

While the jury is still out regarding the dollar, it’s important to prepare for resolutions in either direction as the move will likely have a significant impact on other asset classes.

If we reclaim the pivot highs, it will be strong evidence that the base breakout is here to stay and a new uptrend is underway for the US dollar. This would be trouble for risk assets.

But we’re still only about 1% away from the upper bounds of last year’s base. If these former highs are violated, the DXY is back in the box. And this is likely to be a catalyst for risk assets.

For now, we’ll keep a close eye on the DXY and the various dollar crosses for evidence of where we’re headed next.

We’ll follow up as soon as we get an answer!

As always, let us know what you think.