Do you guys remember those days? 2008-2009? The big joke going around the desks the week that the stock market bottomed was that, “Citigroup’s share price was less than their ATM fees”. That’s one that will always stick with me. Shares dropped below a dollar that week before rallying 400% over the next six months. Ironically enough, the stock is actually flat since August of 2009.

Another one that will always stick with me is the key reversal day that we saw in shares of General Electric. This is THE example of a key reversal that I always point to when people ask me. Look at the market participants just puking out of this one the week S&Ps put in their historic bottom.

Huge volume on a key reversal day that closed up over 16% off the lows. This is how bottoms are born folks. General Electric closed out 2013 up about 390% from that day’s lows.

There are a lot of stories like this and we can be here forever going over them. But I think what’s probably more valuable is going over some of the leading indicators that pointed to that bottom. Remember the market is forward looking, so it clearly wasn’t the fundamentals. We can start with Sentiment. Everyone KNEW the market was going lower. This wasn’t a secret. We were in trouble. Since then, you’ve just witnessed the power of those extreme sentiment unwinds. Talk about a beauty.

We should also point to the fact that 2009 was the mother of all false breakdowns. Literally, the greatest I’ve ever seen. Look at this weekly candlestick chart of the S&P500 showing the late February break of the 2002 lows. You see this is when all the superlatives come out in the media;
“lowest prices since 1996”, “Worst Decline since…..”. And that’s how bottoms are born: 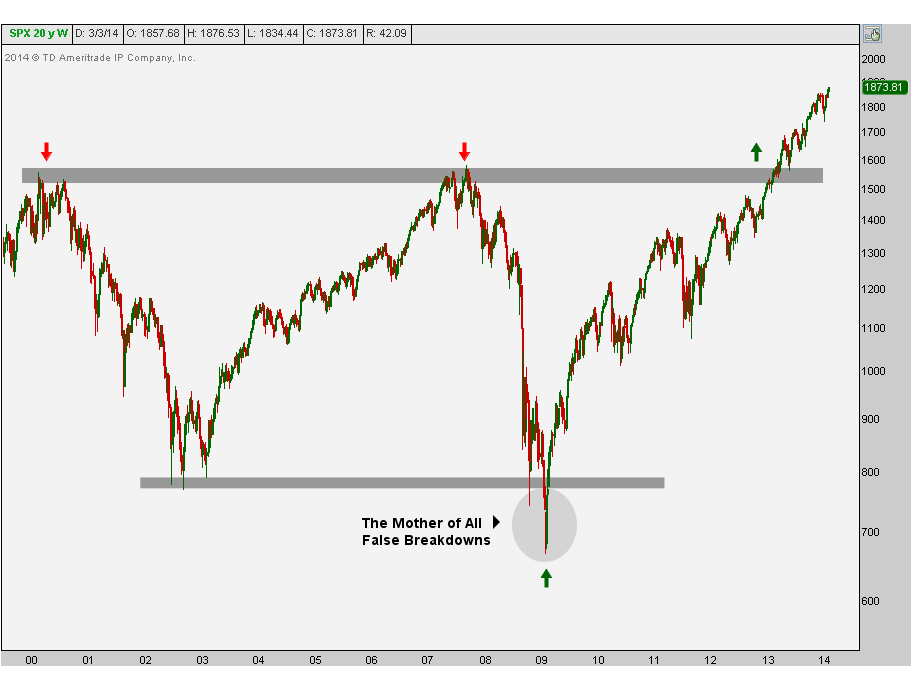 Another favorite chart of mine is the list of NYSE 52-week lows as we approached that bottom. As it turns out, the actual low in terms of individual stocks hitting new lows was back in October. Then at the November lows we saw even fewer NYSE lows. And by the time S&Ps made their historic bottom in March, most of the stocks on the NYSE had already bottomed and begun their epic rally: 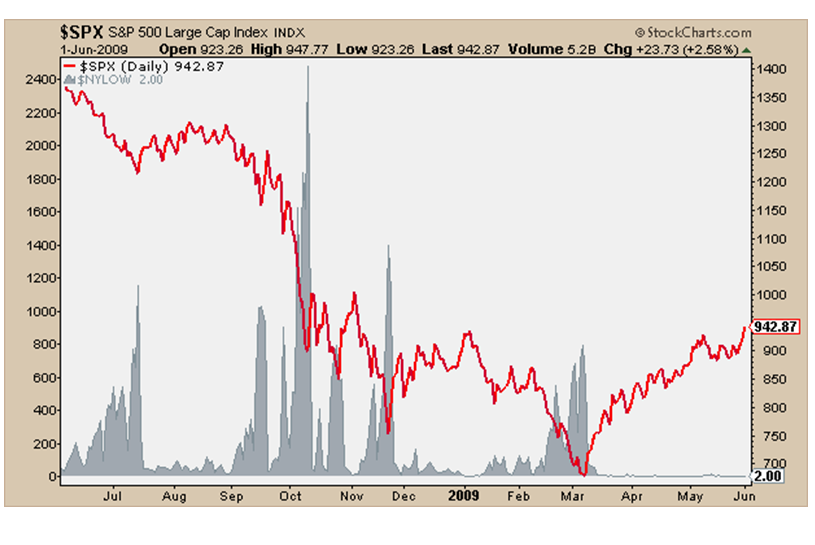 You can see in this chart the red line represents the S&P500 crashing and the gray area chart is the list of new 52-week lows on the NYSE. Do you see the ‘market of stocks’ improving while the headlines kept getting worse and worse on the way down? Awesome right?

You can see a similar bullish divergence in the Consumer Discretionary vs Staples ratio. Look how this very important ratio bottomed out in November, several months before the overall market. Fund managers were already positioning themselves into the more aggressive discretionary space and getting out of the more defensive staples. (please excuse the old charts but they’re well…..old) 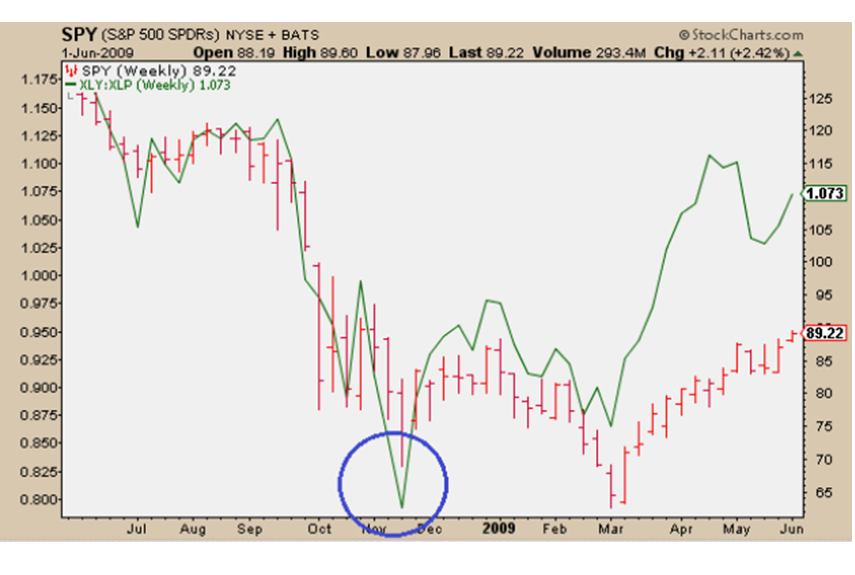 The green line represents the XLY/XLP ratio and S&Ps are in red. You can see the same divergence at the top in 2007. Look at the ratio peaking well before S&Ps: 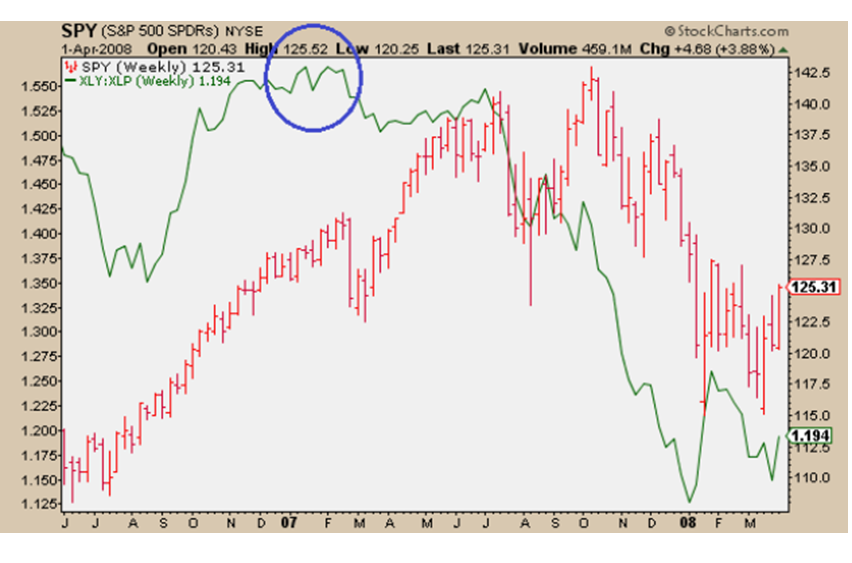 It should be no surprise that the stocks, sectors, and indexes that bottomed before March 2009 turned out to be the leaders on the way up. Technology is a good example. The XLK bottomed in November of 2008, four months before the rest of the market. These guys led for a while and still seem to be leading the way higher. 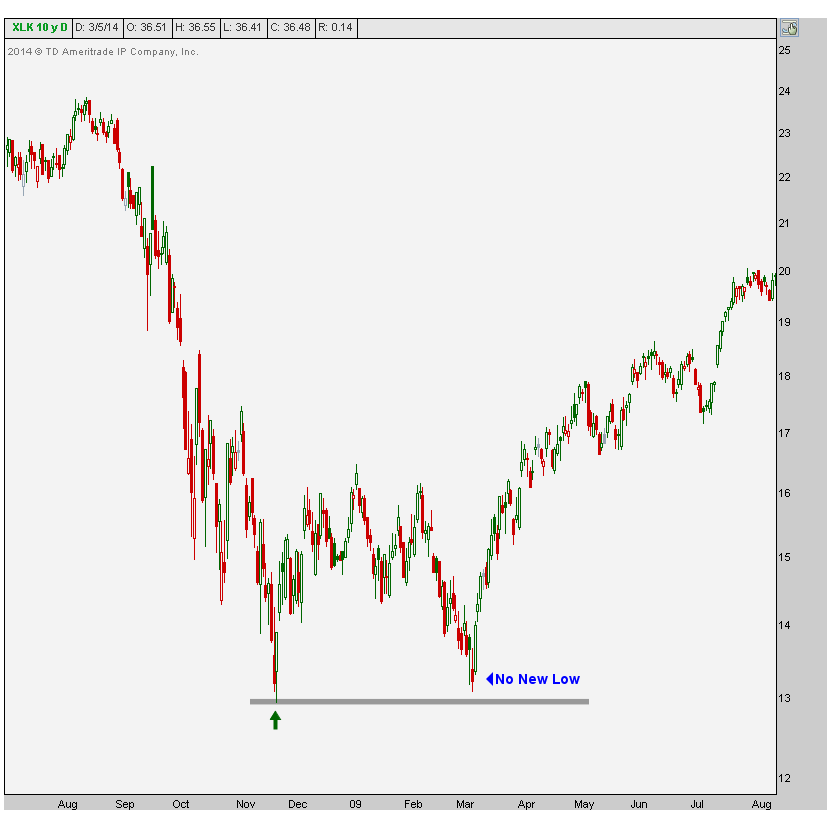 Go back and look at the names that did not make new lows in 2009 and held their Fall ’08 lows. I promise you that those were some of the biggest winners.

From an Elliott wave perspective, we had a text book 5 waves down. This to me is the best example I may have ever seen of the volatility in “wave 3 of 3”. These tend to be the most violent waves in a major move: we’re talking about the 3rd wave down of the 3rd wave on the larger timeframe. This helps because when you identify this 3 of 3 wave you can work your way backwards and count away from the ultra-violent move: 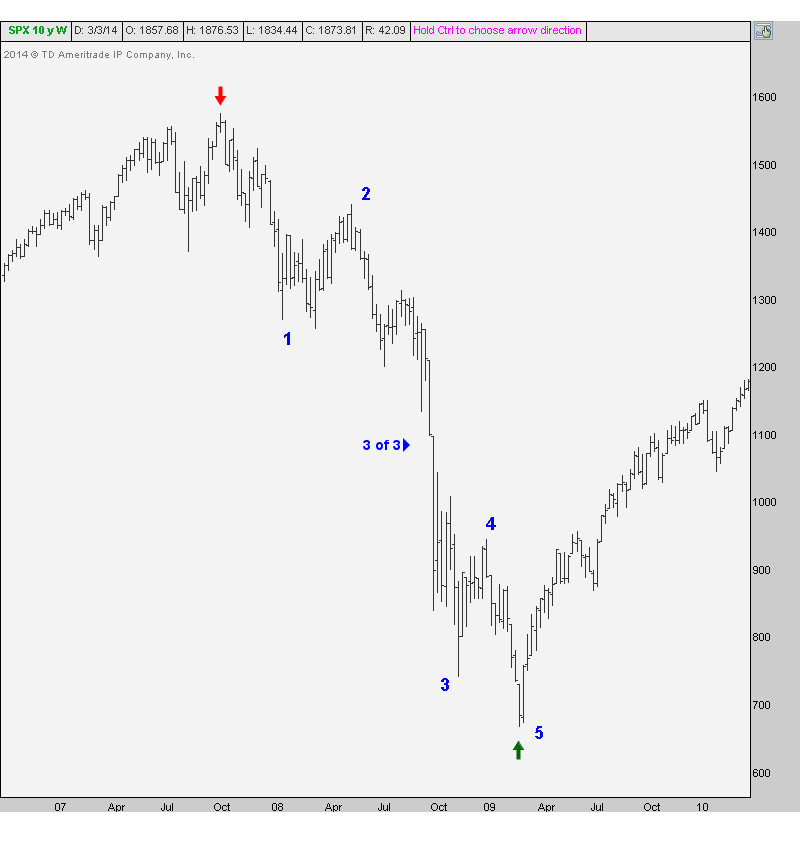 I would say that a big lesson for all of us is probably that trends can last a lot longer than you think. I don’t care how you feel about a company’s fundamentals because the market doesn’t care what you think. All the way down in 2008 these guys were calling bottoms and ignoring the trend. We’ve seen the same thing on the way up, everyone calling tops. And I don’t mean short-term stuff for a trade, I’m talking cyclical bottom and top calls. Lesson learned: trends trend.

What about you? What have you learned during this historic period in time?