This is one of my favorite stock market sayings. And there is a very good reason for that. The risk/reward opportunities that are created from it are surely unmatched. Most importantly, if you’re on the right side of the trade, you generally see a fast and violent move in your favor, and all this with limited risk.

The psychology is simple. A market is trending (whether it be a stock, bond, commodity or currency) and goes on to make a fresh new high (or new low in a downtrend). That new high (or low) above (or below) key resistance (or support), quickly reverses leaving those late comers holding the bag. In an example of a new high, the short sellers get stopped out of the positions they initiated against former highs. And new longs come in and buy the euphoric “breakout”. So what happens? The market quickly reverses lower leaving those new longs up there having to sell in order to get out, adding to the selling pressure that was naturally already there. In addition, the short sellers that got stopped, now have to re-short the security, adding even more sellers. This is why from false moves, come fast ones in the opposite direction.

Now that we understand the psychology behind this setup, let’s look at a real live example. My buddy Jonathan Krinsky over at Miller Tabak sent me this chart earlier today. We’re looking at S&P500 daily candlesticks setting up the potential for a false breakout: 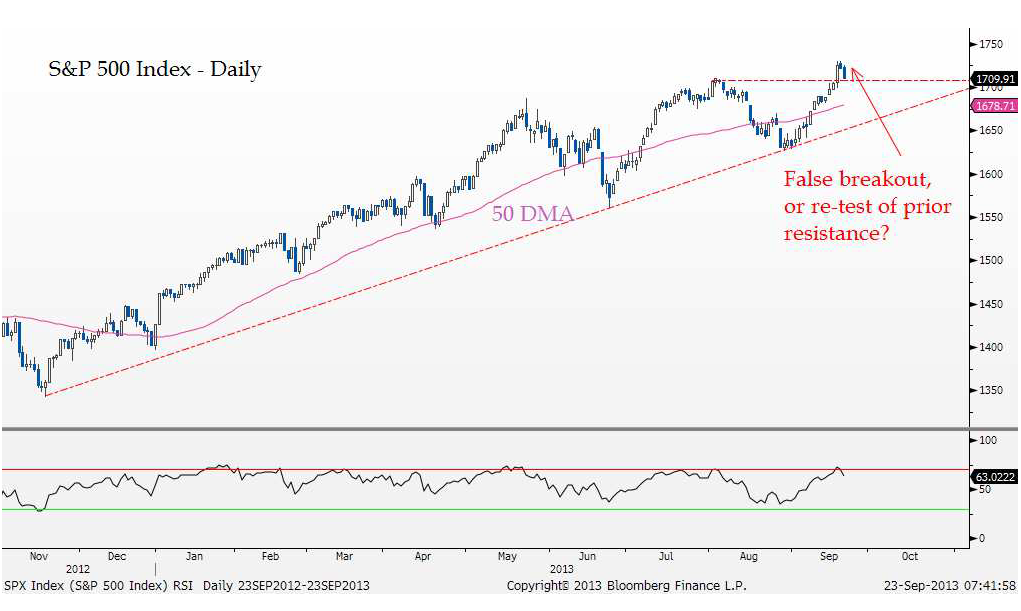 …come fast moves in the opposite direction. That is the saying at least. What that speaks to is when a breakout above resistance, or breakdown below support, is quickly reversed, there is often a very swift move in the opposite direction. One of the reasons for this is as a key level is breached (let’s use the SPX resistance at 1709), many participants add to long positions (or cover shorts) assuming the trend will now continue higher.

When that trend does not materialize, and the market starts heading below that breakout level, all the newly initiated long positions quickly turn into losing positions. This inevitably creates more selling pressure as these positions are unwound, and the other presumable buyers (the shorts) have already covered on the “breakout”. That is the psychology behind the phrase, which could also be called a “bull-trap”.

We mentioned this possibility in our market video over the weekend. And when asked, I said the way to invalidate this potential false move was to put in a nice weekly candle above last week’s closing highs. I don’t even think we need to make new highs this week, just hanging out above last week’s highs and closing on a positive note Friday would be reason enough to get much less bearish.