It’s been a while since we discussed financials. This space has just been a mess so I’ve shied away for most of the year. But after looking through some charts this week, I think they’re finally set up for a nice move higher. And I don’t know many market participants that have anything good to say about these banks, so we’ll take a contrarian approach here and look a little closer.

The first chart shows the Financial Select Sector SPDR ($XLF) in a standard 5-wave decline from the March highs. We noticed a similar pattern in the S&P500 on June 5th and the market has stabilized since then. We also have a bullish divergence in the Relative Strength Index where we saw lower lows in the price of $XLF but higher lows in RSI. The price we’re watching is $14.33, which was the June 11th highs. We want to see higher highs beyond that level to confirm that a change in trend has taken place: 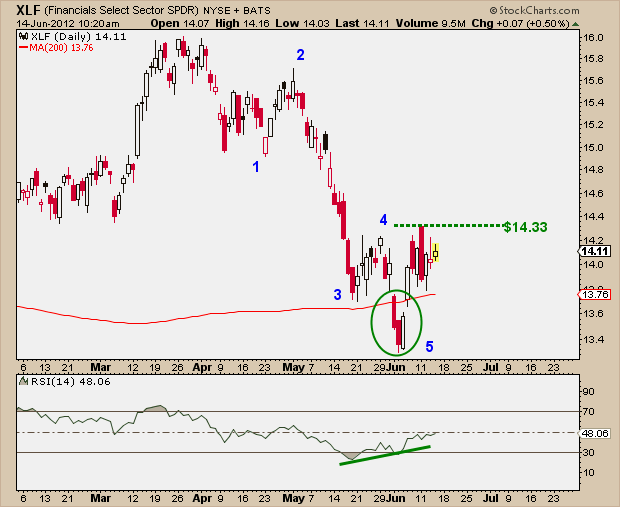 This is pretty standard stuff up above and I don’t think that we need to complicate things. But it’s the false breakdown below that 200 day moving average that gets my mojo risin’. Those 3 days that $XLF traded below the smoothing mechanism could catch the shorts off guard. This is where I see a key pivot point to trade off of. If we rollover back under the 200-day, then all bets are off. If we’re right, I’d expect a big and quick move back to the March highs and perhaps above and beyond.

Now from a more risk-on/risk-off perspective, let’s compare the performance of $XLF to the ultra-conservative US Treasury Bonds. We’ll use the 7-10-year $IEF to represent the middle of the yield curve. The first chart shows two years of this XLF:IEF ratio. Right off the bat we notice that where this ratio peaked in March was exactly the 61.8% Fibonacci retracement from the 2011 decline. This wasn’t a coincidence. Also look at all of the divergences in RSI. Whenever momentum did not confirm price action, this market reversed: 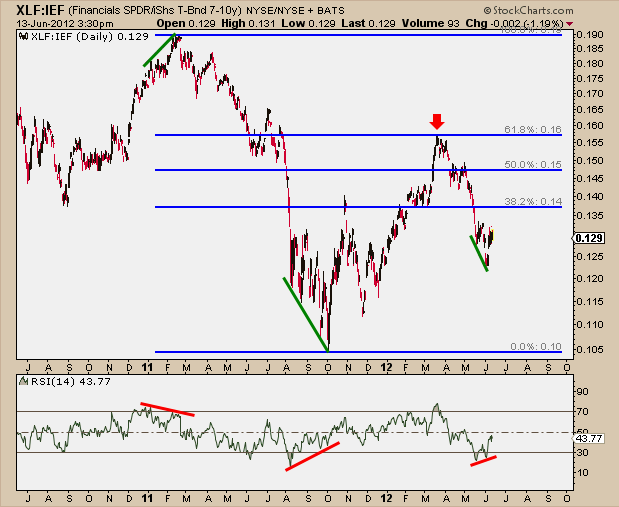 Now let’s look at this ratio off the October lows. This thing went up 50% during the 5-month period that the S&P500 rallied just 30%. So this particular Financials vs US Treasuries comparison tells us a lot. Well late last month we saw price attempt to break down below the 61.8% Fibonacci retracement of that monster move, but could not. In fact, it is now trying to get back above that 200 day moving average. This leaves that failed breakdown as an “Island Reversal” pattern that could be the catalyst to reverse this trend. 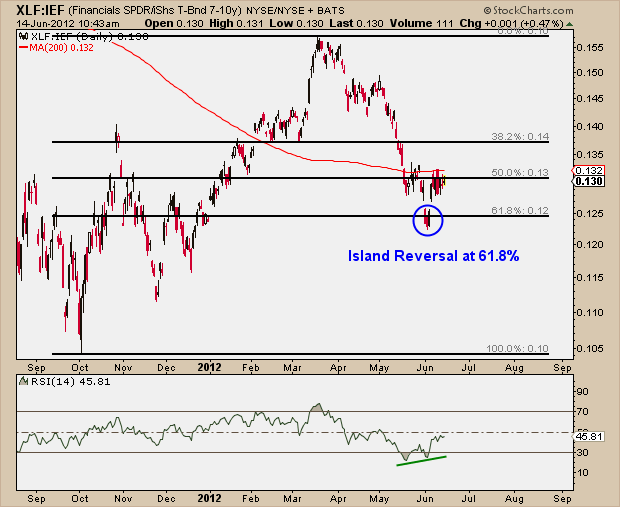 Confirmation with this ratio back above the 200-day moving average and we could be off to the races. Call me crazy, but I’m seeing a lot of reasons why we could see a move higher in financials. And not just on an absolute basis, but relative to US Treasuries as well. If we’re right, this bodes well for risk assets in general. So we’ll be watching this one closely.