On Tuesday I posted a mystery chart and asked readers and followers to decide whether it should be bought or sold based strictly on price. Without knowing what it was, the majority of the responses coming in were to buy it, or buy it with a stop below previous highs.

This mysterious chart is actually a pair: SPDR Euro Stoxx 50 as the numerator and FTSE China 25 Index as the denominator. In other words, Long $FEZ / Short $FXI. This chart shows the relative performance of Europe compared to China over the past 7 years. 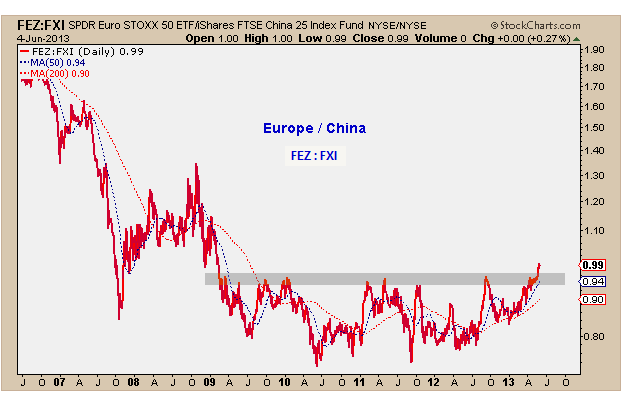 This China fund does not represent the Shanghai Composite or any other Chinese average. The $FXI consists of 25 of the largest and most liquid companies that are available to international investors. All of the securities trade on the Hong Kong exchange. So it is not representative of all of China as a country, but just a basket of these specific companies: Bank of China, China Mobile, CNOOC, etc.

Same thing with the European Fund. $FEZ consists of just 50 humongous European companies. So France’s Total and Sanofi, Germany’s Siemens and Bayer, and definitely not Bank of Greece. 50 “blue chips”, not the little guys.

To me, this chart is clean. And it represents an ongoing theme that we’ve been talking about for a while. Which has essentially been long of big developed nations, heavily weighted Europe, and short Emerging Markets. For example, coming into the year, Phil Pealrman published a list of charts to watch for 2013. My chart was the Long $EFA / Short $ILF pair. This trade went long companies from developed countries outside of the US & Canada and Shorts Latin American companies against it. At the time, the price was at 1.30 and is now at 1.50 without much of a pull-back.

Another recent example of this theme has been the $FEZ / $ILF pair, which is Long the Euro Stoxx 50 explained above, and short the same Latin American 40 fund mentioned in the second example. Phil and I have been talking about this one consistently in our weekly videos. And it has also been working fabulously.

So this one is just another spin-off I suppose of that same ongoing theme. This Long Europe / Short China looks to me like a beautiful breakout after a multi-year base. As long as we’re above those breakout levels, I find it hard not to love it.

So just for fun, let’s think about what this might mean for these two areas of the world. Is it more that Europe is breaking out and is going to be a huge winner going forward? Or is China going to roll over and get destroyed? As far as we’re concerned, price and risk management is the only thing that matters for this particular chart. But there may be some spin-off trades we might make in the future based on the information we gather from this pair. I believe that the behavior of each of the components in the ratio are going to be fascinating to watch. So stay tuned…