Brazil just closed at an all-time daily and weekly closing high. These are not things we normally see in downtrends. Russia’s MICEX also closed at new all-time highs. There is some serious strength coming from Emerging Market stocks and the data is still suggesting there is a lot more upside left out of this group. I think we’re just getting started.

Today we’re taking a look at some equally-weighted emerging market indexes that I put together and compare this group to other alternatives, like U.S. stocks and other developed markets such as Japan and Europe. There is an overwhelming theme here of rotation into Emerging Markets after years and years of underperformance. 2018 is a new year and emerging markets are leading us higher.

First of all, here is an equally-weighted index of the BRICKS nations. This is equal parts Brazil, Russia, India, China, South Korea and South Africa all priced in local currency. This still looks like an uptrend to me and one that can still go a lot higher considering the massive base this broke out from last year: 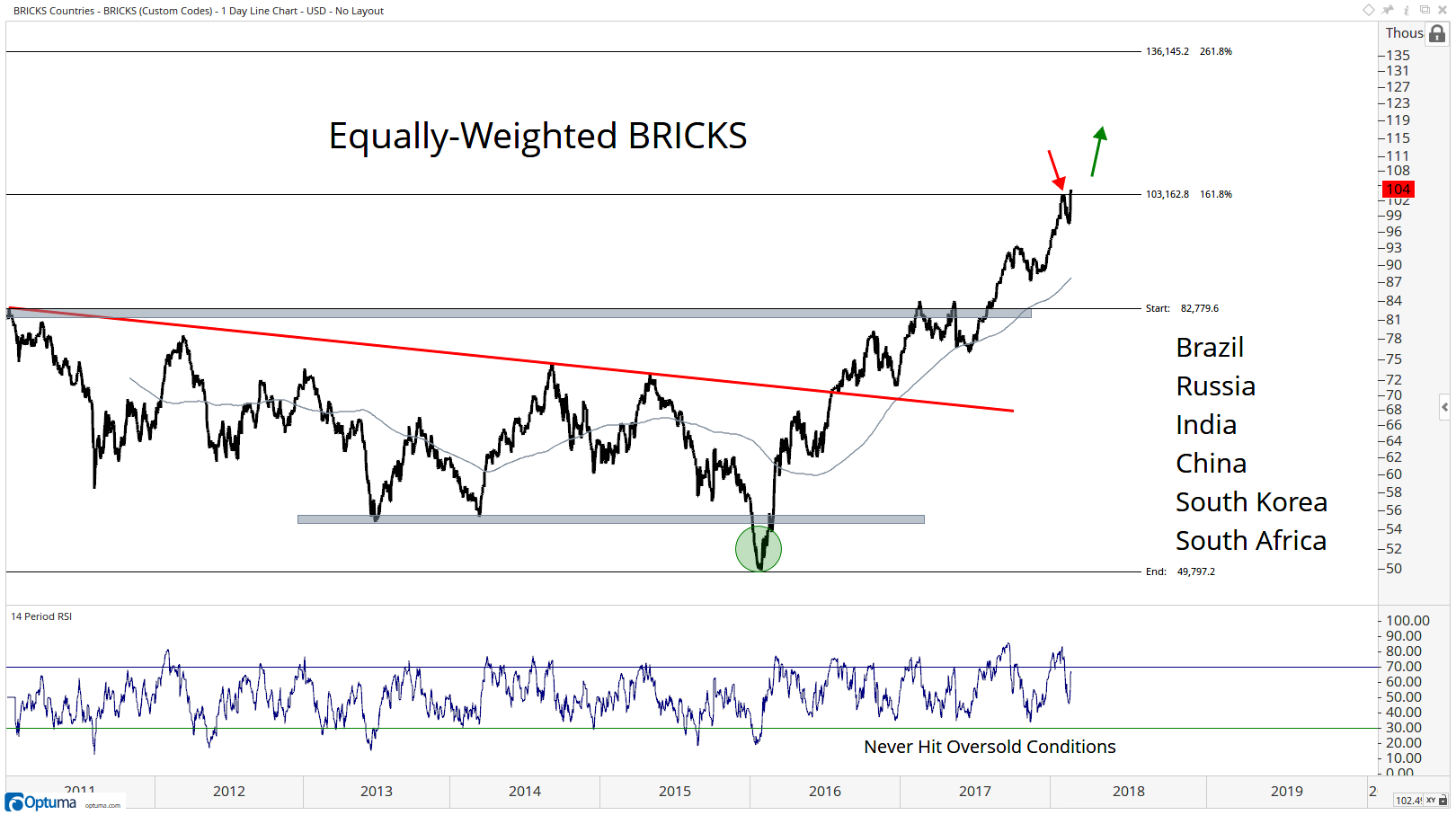 From a risk management standpoint, I think watching this 103 level that was resistance last month is important. This was the 161.8% extension of the entire 2011-2017 base, which very much makes this a level of interest. If we’re above that, then I think being aggressively long emerging markets makes all the sense in the world.

To take this one step further, here are the top 15 Emerging Markets priced in local currency. This isn’t like some of the Exchange Traded Funds where China and South Korea represent half the index. This is equally-weighted and you can see the list here: 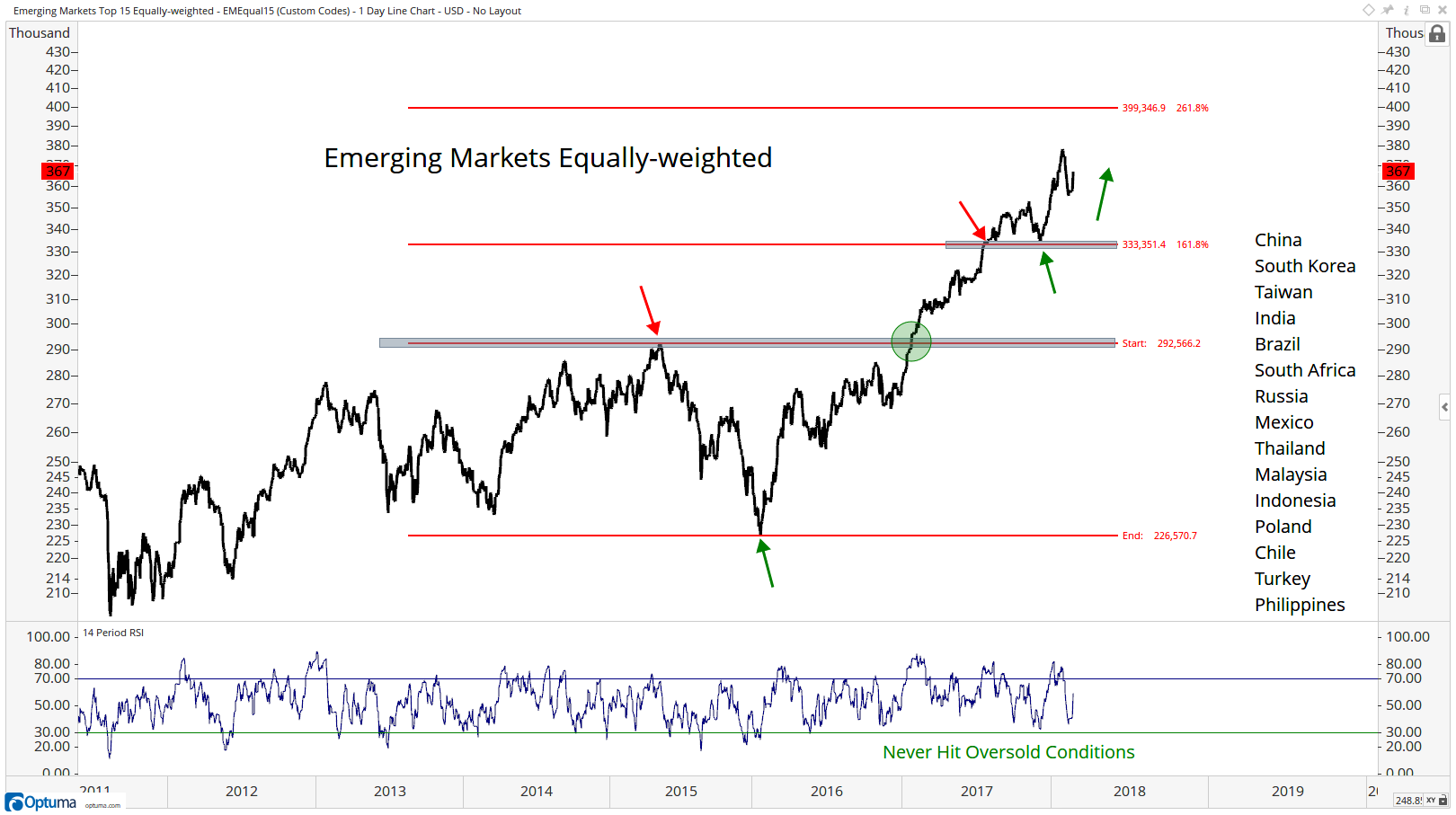 This looks like a perfectly normal uptrend with little reason to think anything has changed. To the contrary, the fact that momentum continues to hold above any oversold readings is further evidence confirming that yes, we are in fact in an uptrend.

Here is that same Equally-weighted Emerging Markets Index vs the S&P500. We want to buy smiley faces not frowny faces right? Does this look more like a bottom or a top? 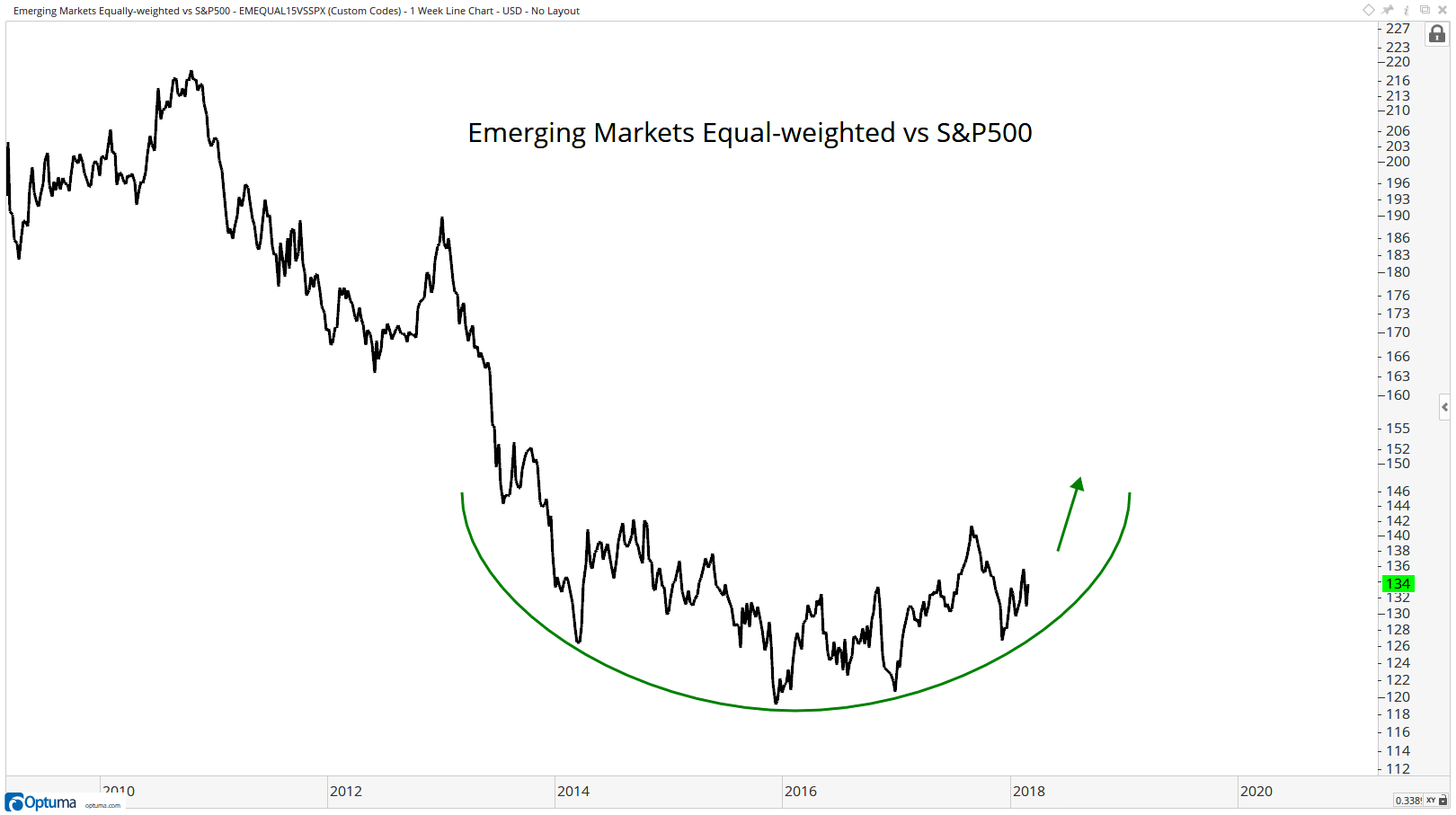 We can see this in the performance numbers too. This year, Emerging Markets have once again been outperforming both the S&P500 and the $EFA, which is basically Europe & Japan, by a lot. Here is the comparison going back to the beginning of 2016, when the mutli-year bear market in Emerging Markets was coming to an end:

Hedge Funds see this. They are looking for 2 things: momentum and relative strength. It seems clear that Emerging Markets are showing signs of both.

As far as the $EEM fund itself is concerned, I still think the path of least resistance is higher. We want to continue to be buyers of any weakness towards 46 and be long if we’re above that. I think we’re getting back up towards 56 which were the all-time highs in 2007: 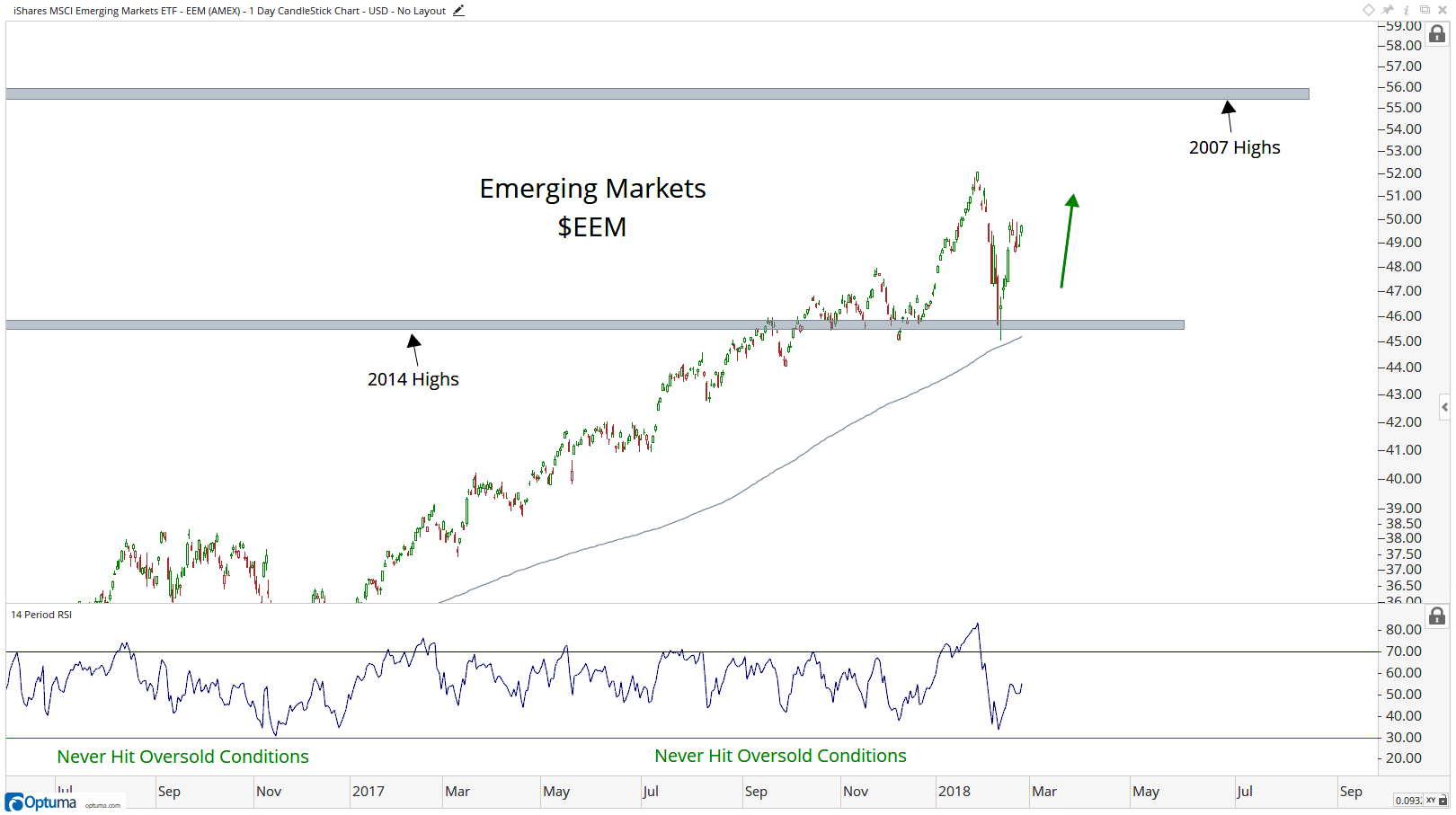 This rotation into this part of the investing world has been a theme of ours all year. I think that Mark Dow made a good point in our recent podcast episode about how for the Buy Side, it’s not so much about commodities-based emerging markets. It’s that Emerging Markets, whether commodity importers or exporters, are together in the same part of the risk spectrum when it comes to asset allocation. It’s more of a behavioral correlation than a fundamental correlation between commodities and emerging markets. I thought that was really interesting and fits right into this thesis of money flowing into those types of stocks in general.

We’ve been talking about this rotation and I have a feeling this theme is here to stay for a while and we’ll be talking about it more and more as the year progresses.

If you’re not already a member, start a risk Free trial here to check out this entire Chartbook and much more!