There is a constant conversation among market participants about which indexes are the better representation of the stock market, particularly in the United States. While the media often quotes the Dow Jones Industrial Average daily changes, professionals tend to steer towards the S&P500. The argument normally revolves around the price-weighted nature of the Dow Jones Industrial Average vs the market-cap driven S&P500. The diversity of 500 stocks in the S&P is also a key point when compared to just 30 stocks for the Dow.

In this module I want to talk about why I think the Dow Jones Industrial Average is underrated and why I think it is one of the most useful indexes for any stock market participant.

High Positive Correlation With The S&P500

First of all, the Dow Jones Industrial Average and the S&P500 have a very high positive correlation to one another. While one is a price-weighted index with just 30 stocks and the other is a market-cap weighted index with 500 stocks, the correlation coefficient over the past year is almost a perfect 1.0. If you go back even further, 2 years, 3 years, 5 years, etc the numbers just get even closer to 1. So whether you think the mechanics are wrong, in the case of a price-weighted index, or one is not diversified enough with just 30 stocks, they still move in the same direction. Here are both indexes together going back to 1950. If I didn’t label them it would be difficult to pick out which was which: 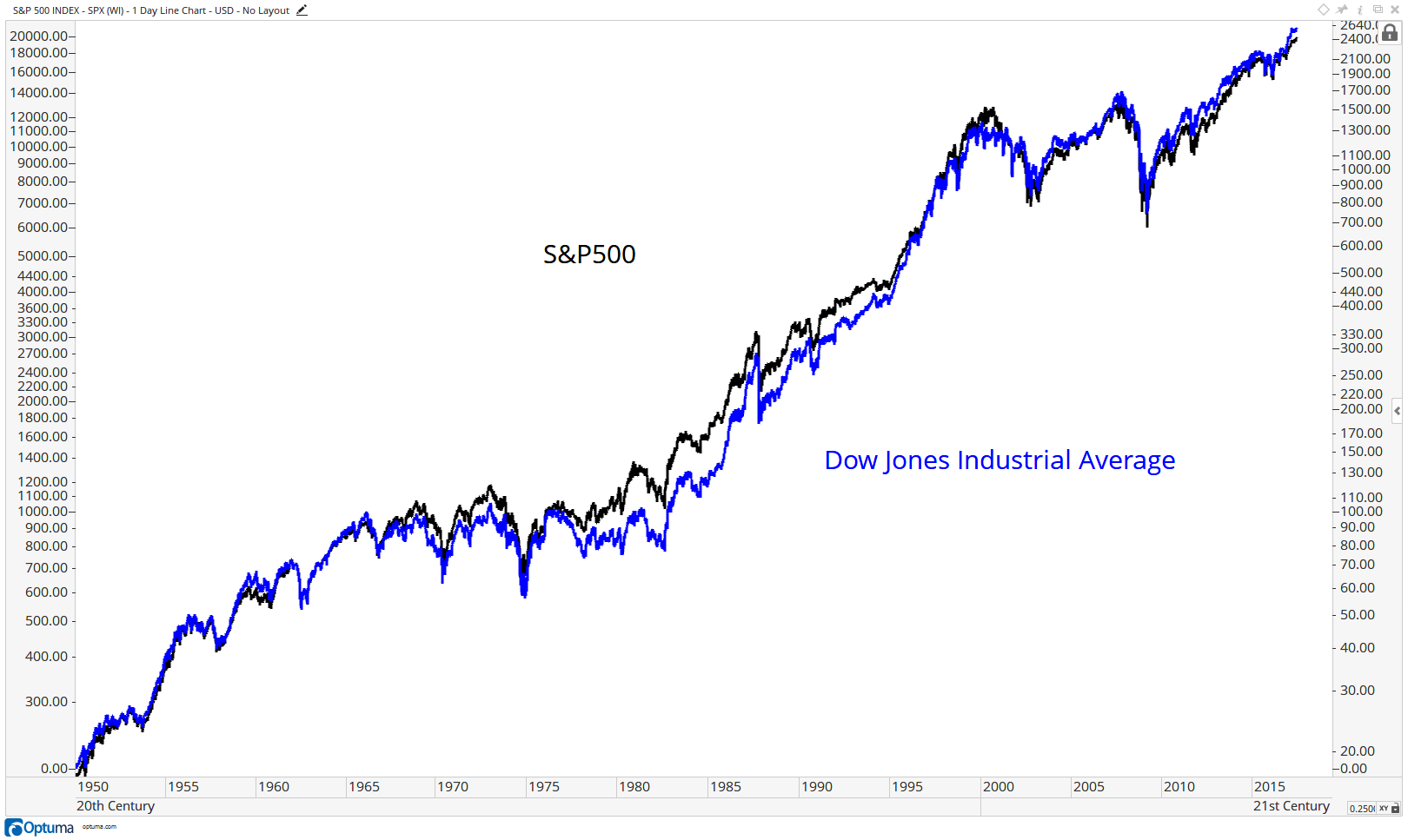 Now, what often gets overlooked is the fact that the Dow Jones Industrial Average having just 30 components is a good thing. If you want to go through every stock in an entire index, do you want to go over 500 of them or just 30? From an efficiency standpoint, knowing that the two indexes move together anyway, sign me up for just the 30 stocks any day!

Analysis Of the Dow

Every week I go over every single Dow Component on both weekly and daily timeframes. I simply go in alphabetical order, starting with Apple $AAPL and finish with Exxon Mobil $XOM. One by one I start with the weekly chart to get structural perspective on the stock looking back 10 and sometimes 20 or 30 years. I take note of any overhead resistance, downside support, the direction of the price trend and momentum readings. Then I turn to the daily chart for more tactical perspective. Once we have an idea of the longer-term trends, shorter timeframes are good for execution: entry and exit points. 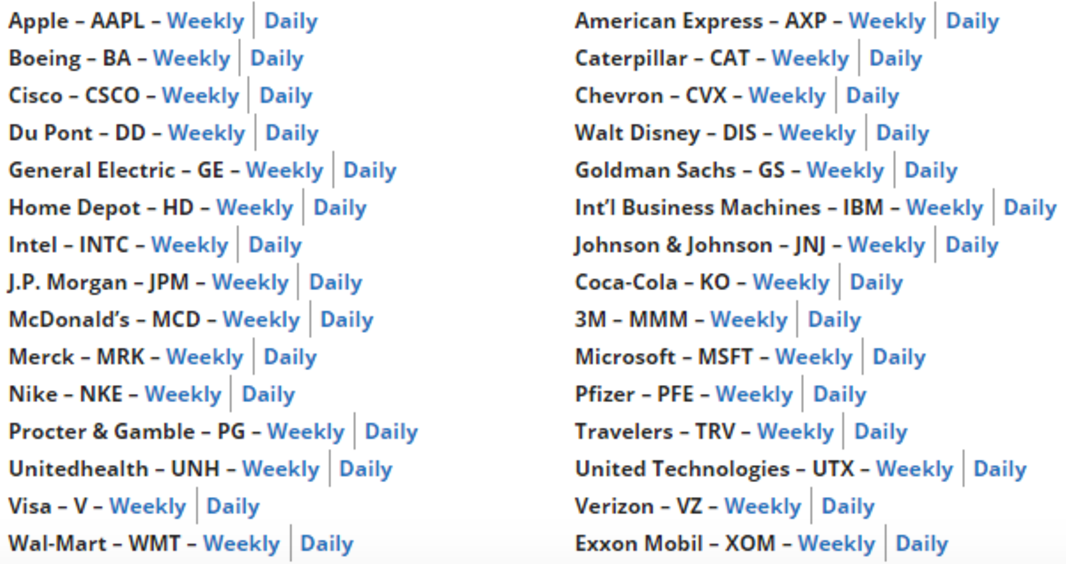 In addition to making buy, sell or hold decisions on 30 of the most important stocks in the market, it’s the weight-of-the-evidence conclusion here that I find the most valuable. By going over each stock within the index, we can make a sum-of-the-parts based decision for the direction of the index itself. If more of the 30 stocks are going up, it’s hard for the index to fall. On the other hand, if the majority of the 30 Dow components are in downtrends, it’s hard for the index to rise. It’s just math.

Sometimes, you’ll notice that the majority of the stocks in the Dow are neutral and not showing much of a trend. This is evidence that the index itself is likely to remain stagnant or continue to consolidate. Identifying a lack of trend is trend recognition as well.

Relative Strength Within the Dow

From a relative strength standpoint, looking at just 30 stocks throughout this exercise makes the outliers really stand out. Are most stocks making new lows, but one or two are making new highs? It’s easy to see if that’s the case. We can make similar conclusions if there are a few stocks making new lows, while the rest are all hitting new highs. We want to ask ourselves in which sectors do these outlier stocks belong to? Because of the massive market capitalization of the Dow 30 components, they are usually one of the larger holdings within their sector. For example, Apple is the biggest stock in Tech and Exxon is the biggest stock in Energy. J.P. Morgan is the 2nd biggest stock in Financials and General Electric, 3M and United Technologies are 3 of the 4 biggest holdings in the Industrial Sector.

From a sector rotation and relative strength perspective, this exercise can be very rewarding and can be done within a very short period of time. I’m not sure why some people tend to prefer the S&P500 over the Dow Jones Industrial Average. When someone asks you what the market did today, what are they referring to? They want to know what the Dow did. Since I do this professionally, I run through the 1000 charts of the S&P500 (500 x weekly & daily) to come to a similar weight-of-the-evidence conclusion. It also really helps to identify the strong and weak sectors using a similar weight-of-the-evidence approach to the sub-sectors inside each sector. I wrote about this process here: Diary of a Charting Session S&P500

Charles H. Dow published his Dow Theory tenets in the Wall Street Journal back in the late 1800s. The principles he detailed can still be applied today. I think the Dow Jones Industrial Average is a very valuable tool, particularly for overall market trend recognition, finding relative strength & weakness between sectors and simply by chance, finding individual trade ideas.

Give it a shot. Start doing this exercise on a weekly basis and tell me that you don’t find it extremely valuable. I dare you.