If you wish to know the road, inquire of those who have traveled it

Technical Analysis is relatively new to us in the Western world. Charlie Dow originally wrote down his principles towards the end of the 1800s. But technical analysis can be traced all the way back to early 18th Century Japan. The main source of income for the group of feudal lords who ruled at the time was by taxation. Farmers would often pay their taxes in rice, which could then be transported. Rice was being stored in warehouses in the port city of Osaka. Here is an image of what this looked like in the early 1800s, after it had been in place for over a century: 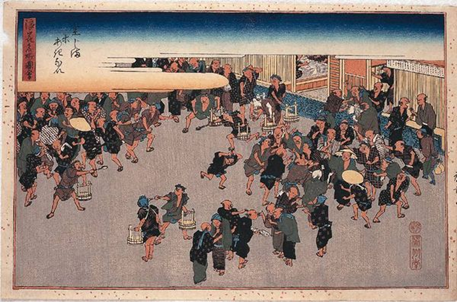 The lords were living a very nice lifestyle at the time. So in order to compete with the Jones’ and maintain their luxury living, they not only had to sell the rice in storage but also rice from future harvests. So they would issue rice warehouse receipts for “future” rice. These rice contracts were then being sold and bought by speculators, becoming the world’s first futures market. 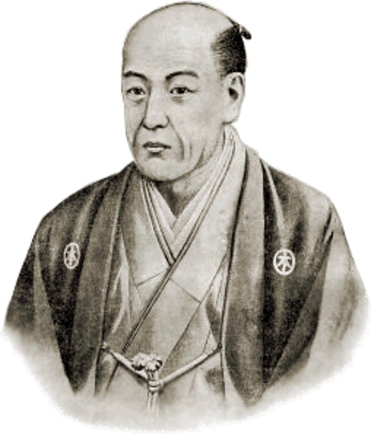 Munehisa Homma originally started trading at his local rice exchange in the port city of Sakata. This is why you frequently come across the “Sakata Rules” regarding Japanese Candlesticks. After Homma dominated his local markets, he went to trade in what today we call Tokyo. In order to learn about the psychology of investors, Homma analyzed prices on the rice exchanges going back to the 1600s. His methods are the oldest examples of technical analysis documented. Munehisa Homma had so much success trading rice using technical analysis that it led him to become an honorary Samurai.

Remember, they obviously didn’t have the technology that we have today. So Homma hired runners every 6km between Sakata to Osaka to communicate market prices. Through his interaction with traders, he quickly discovered that not only was there a direct link between the supply and demand for the rice, but markets were also influenced by the human emotions of fear and greed. By studying these emotions in order to help him predict the direction of prices, he recognized that there was a big difference between the value and the price of rice.

We are going to get into candlesticks and how we can incorporate them into our process. But the one thing that I want to make perfectly clear is that we do not want to be one of those guys over analyzing every single candlestick. It is important to be aware of them, but where they occur is what we’re most concerned with. So keep that in mind while we go through this particular topic. 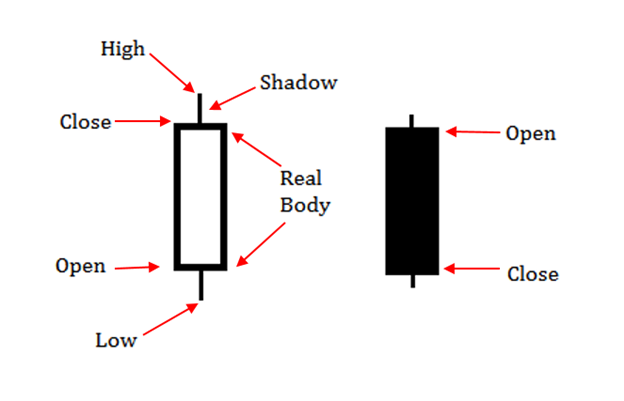 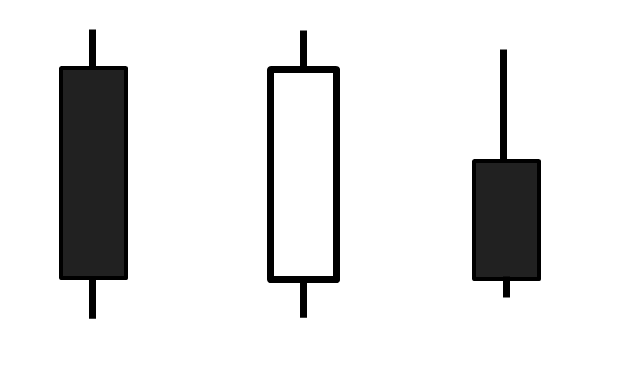 These are your basic candlesticks with uniform colors: black and white. 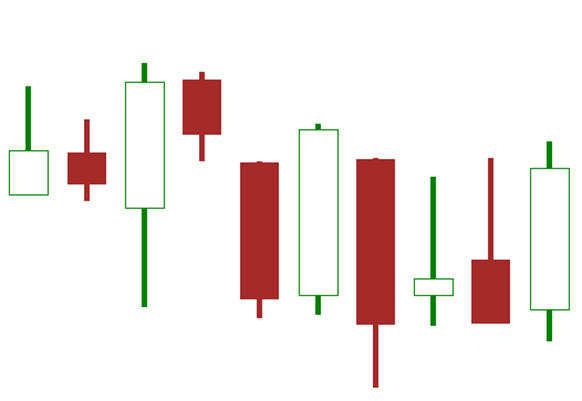 Something also worth noting is that you can have a hollow red candlestick and you can also have a filled green candlestick. Remember, whether the candle is hollow or filled has nothing to do with the previous closing price. This is determined by the open and close of the candlestick itself, regardless of where it is relative to the prior period. The color is determined by where the current close is compared with the previous close. Here is an example of a hollow red candlestick. In this case, prices gapped down below the prior close, rallied throughout the period, but closed below the prior period’s close. Hollow but red: 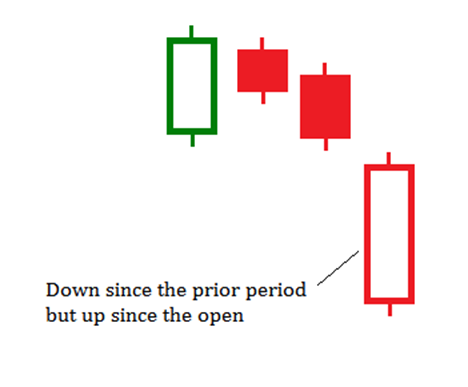 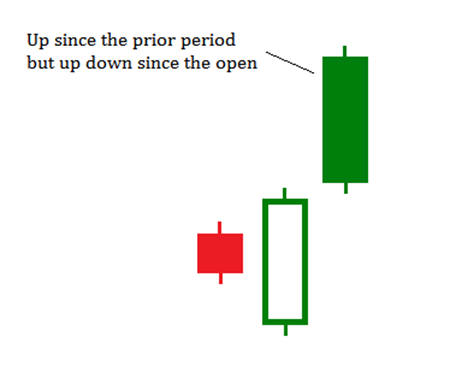 There are many types of candlesticks with all different shapes and sizes. They can be classified into 4 four different types within 2 groups: if they the period in question closes above the prior period’s closing price, then the candlestick is in green. If the period closes below the previous closing price, then the candle is red. With regards to the filling of the candle, you’ll find a hollow candle if the close is above the opening price and a filled candle when prices close below the opening print. Note that you can have red hollow candles as well as green filled ones. 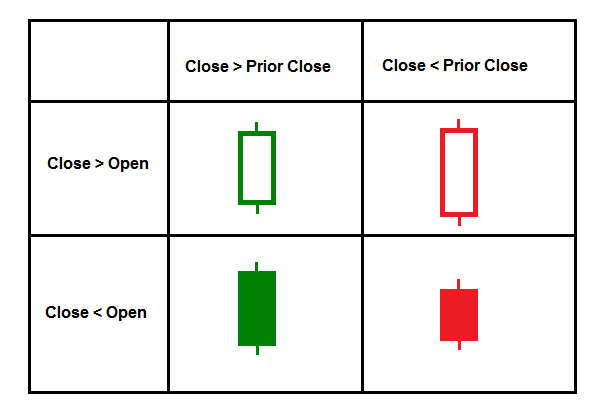 Now, not all of them need to have well-defined real bodies like this. In many cases, in fact, they don’t even have a real body. 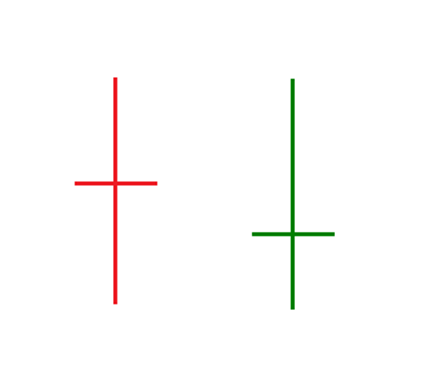 These are what we refer to as a Doji. A Doji is when there is movement intra-period, higher and/or lower, but the close is at or near the opening price. Here is an example of a Long-legged Doji where prices rallied well above the opening price, sold off well below that price, but ultimately closed right where it opened. These can be red or green, depending on the prior period’s close. They represent indecision and can often be found at turning points: 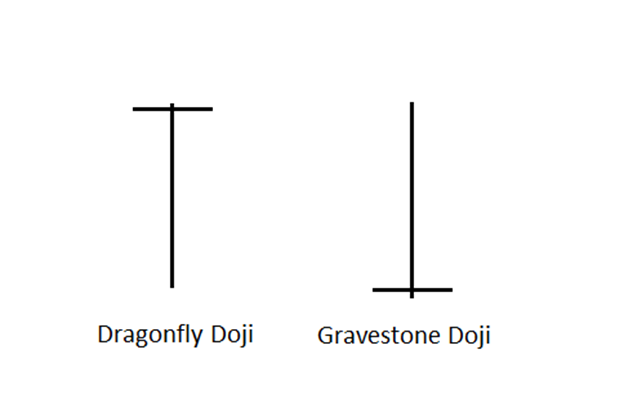 There are two other common types of Doji’s: the Dragon Fly Doji (also called a “Hammer” if it comes after a downtrend) and the Gravestone Doji (also called a “Shooting Star” if it comes after an uptrend)”. Each candlestick or, in many cases, groups of candlesticks, have names that they have been given over time. The way I see it, it’s not the names themselves that matter, but more so the implications of the candles that matters most.

From Steven Nison who is credited for bringing these Japanese techniques to the western world:

Technical Analysis is the only way to measure the emotional component of the market. We know that many times an ounce of emotion can be worth a pound of facts. How else to explain a sudden shift in the market without a change in the fundamentals?

A fascinating attribute to candle charts is that the names of the candle patterns are a colorful mechanism describing the emotional health of the market at the time these patterns are formed. After hearing the expression, “dark-cloud cover,” would you think the market is in an emotionally healthy state? Of course not! This is a bearish pattern and the name clearly conveys the unhealthy state of the market.

Many of these candlesticks have funny names like Abandoned Baby or Hanging Man, but again, it’s the implications of the candlesticks or groups of candlesticks and in what environment they appear that we want to pay attention to. The names themselves, in my opinion, are less important.

Something else worth mentioning is the importance of the 65-minute candle. There is a good reason why it is important to use a candlestick that completes an entire period. For daily, weekly or even monthly candlesticks, this is created naturally. When looking intraday, however, you want your candlesticks to all be equal periods. In the U.S. Stock market, there are normally 390 minutes in each day. So you can look at 39 10-minute periods, for example. Or you can analyze 13 30-minute periods. But if you want to look at hourly charts, you will only have 6.5 hr candlesticks. Therefore to have an equivalent timeframe across the board, each day in the stock market would consist of 6 65-minute candlesticks. To quote my friend Brian Shannon from alphatrends.net:

Look at the picture and ask yourself ‘which one doesn’t belong?’ It is not a trick question… the lone apple is clearly different than the 6 oranges in the picture. 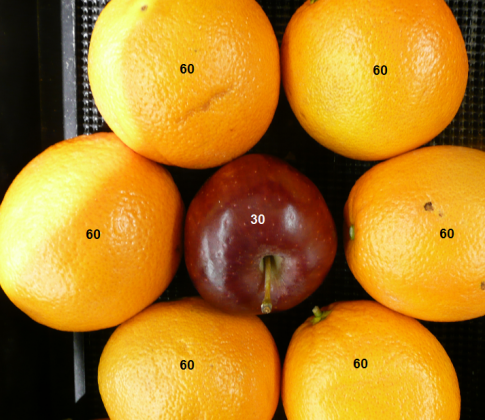 Candlesticks Are A Supplement

I want to make something clear about candlesticks: they are not the end all be all of technical analysis. In fact, in many cases, I don’t use them at all. For example, once a week I run through all of my charts: commodities, forex, stocks, U.S. Indexes and Sectors, International Indexes, ETFs, etc with just bar charts. I take out my momentum oscillator, I remove any moving averages and just look at weekly and daily bar charts. It’s amazing how much you can see when you get everything else the hell out of the way. When you just want to visualize the changes in equilibrium between supply and demand, the ultimate Keep It Simple Stupid (K.I.S.S.), OHLC Bar Charts work great (Open-High-Low-Close).

Also, when doing ratio analysis, I prefer not to use Japanese Candlesticks. There are many reasons why, but mostly because we are analyzing one security relative to another over time. Since I use this for trend recognition, a line chart connecting closing prices (weekly or daily) is more than enough for me. Also, the reason we use candlesticks is that they tell a much better story visually than other types of charts. But in the case of ratio analysis, I don’t need the intra-period story. I’m just looking for trends. In fact, when looking at ratios between two ETFs, let’s say, one might open before another one, so the “story” being told by the candle is probably being driven by incorrect information. So with ratios, I always use line charts.

For day-to-day charting, however, Candlesticks do the trick for me. I think they tell a great story that you might miss when using other types of charts. I think all of them, bars, lines and candles, have a place in my process as well as many other technicians whose work I respect. They each play a role and I guess it’s all about knowing when to use which ones depending on what your goal is at that particular moment.

While certain candlesticks are more bullish than others and they each tell a unique story, it’s the location of these candlesticks that is most important. When they appear near support or resistance levels and match up with Western charting techniques that we really pay the most attention.

One example is when you get a big bullish candlestick to complete a breakout above former resistance. 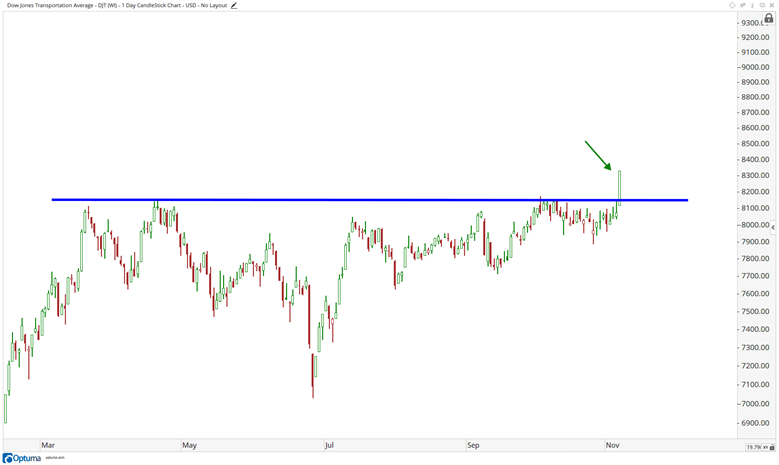 This suggests higher prices are likely coming in the near future. This is what the Dow Jones Transportation Average did after that candlestick 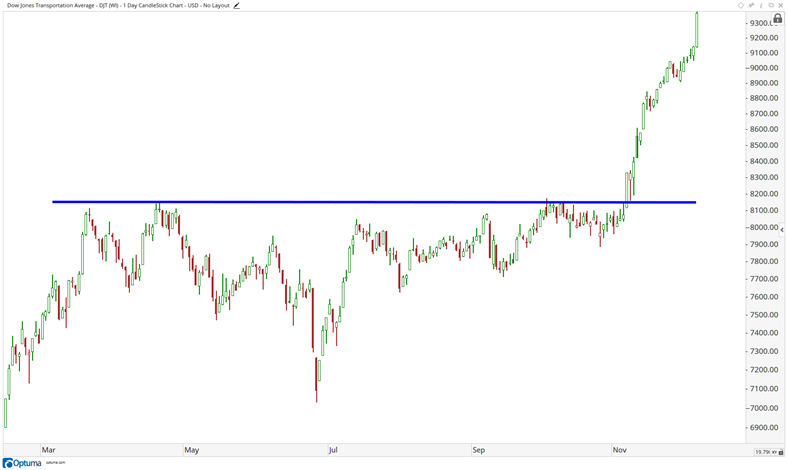 You can also see them in reversals near support. Here is a long-term chart of US Treasury Bond Yields so you can see that former support in 2012. 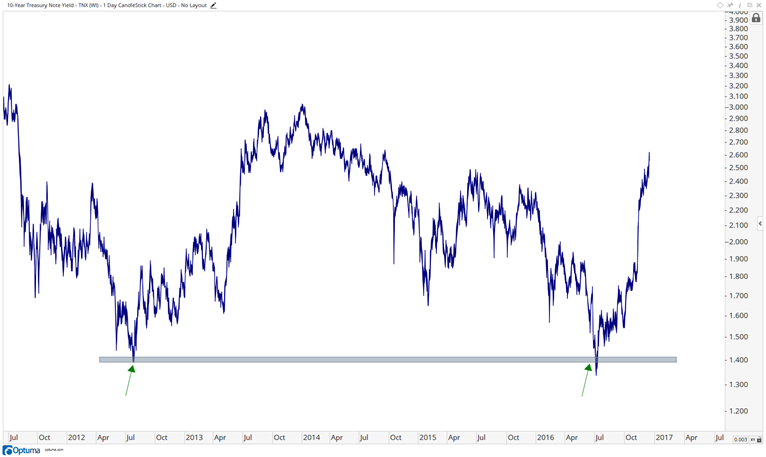 In Summer 2016, we rates got back down to where they bottomed out 4 years prior. But one of the reasons we were able to make that call: “Short Bonds, Yields are going to rip”, was in part because of the candlestick. 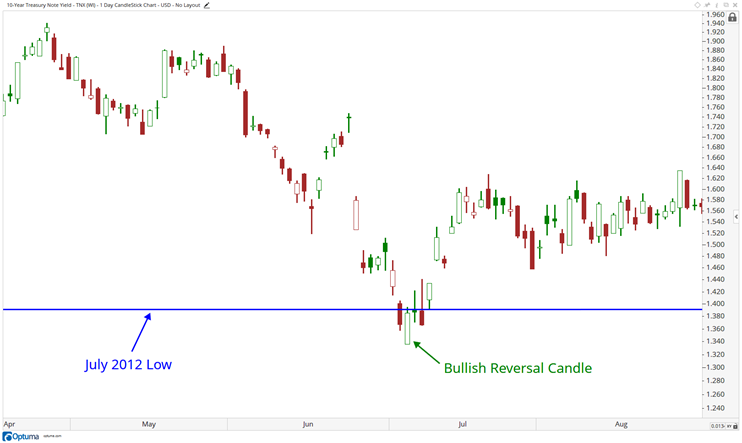 Here is a closer look at the new low made in price, but a green hollow candlestick showing that 1) prices closed well above the opening print, which happened to be below the 2012 low, and 2) closed above the prior close, making it both green and hollow. But what I want to point out, is that this beautiful bullish reversal candle came near former support, which is a very classic, simply to understand western technique.

It’s using them together that adds the most value to my process.

Here is another of the Russell2000 in 2008 gapping up to open at new highs, rallied even further intraday, and then fell to close back below former resistance, invalidating any breakout. This bearish reversal candlestick at resistance was the market suggesting the bears (sellers) were still in control at those levels. 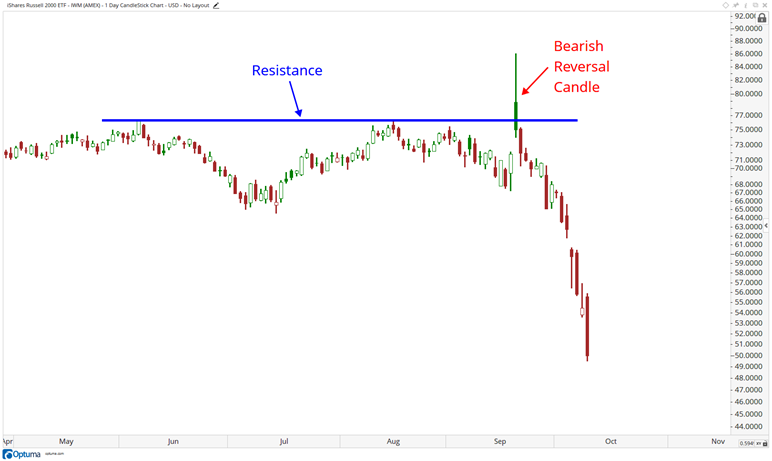