The stocks vs gold ratio is something we like to take seriously around here. In my opinion it is still one of the, if not the, strongest long-term trends on earth. Long-time readers of this blog already know the deal, but for those who aren’t familiar, this trend has been declining now for over 13 years (see here). In 1980, the price of the Dow Jones Industrial Average was the same as an ounce of Gold. Over the next 20 years, this ratio went from 1:1 to 44:1 as the price of the Dow Industrials grew to over 44 times the price of an ounce of Gold. Well, that’s the bubble that, in my opinion, popped at the turn of the century that you don’t hear many people talking about. Not sure why, because this trend is as strong as the come.

Since 1999, the trend has been Gold outperforming Stocks. From 44:1, we dropped below 6:1 last August before a year long correction temporarily brought the ratio back above 8:1. But we don’t think this has changed anything in the big picture. Corrections are normal during ongoing trends and we’ll chalk this one up as just that: a correction. Meanwhile, it appears that this downtrend could get going again as every possible trendline has been broken and the ratio struggles to hold on to this summer’s support. Here is a look at the daily chart: 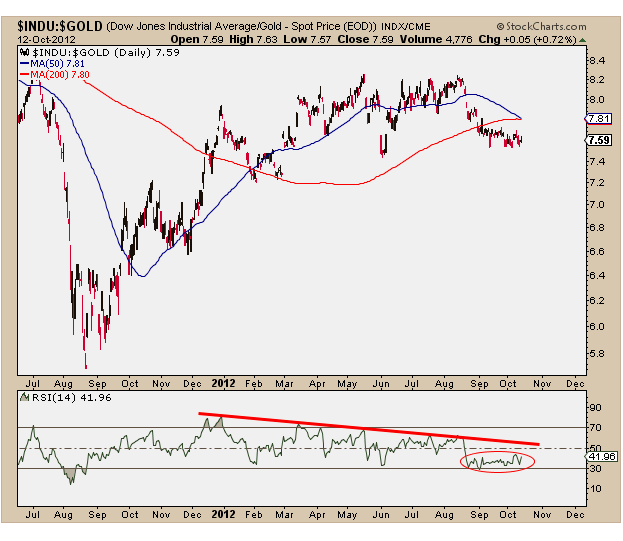 Momentum, as defined by the Relative Strength Index has been in decline for almost a year even with prices of the ratio near their correction highs as recently as a couple of months ago. A rolling over 200-day moving average and declining 50-day doesn’t help the Dow’s cause here either.

Now take a look at the weekly chart. This one only goes back 4 years, so imagine the upper left of the chart coming down from as high as 44. We still see declining prices with downward momentum and nothing on this chart gets me optimistic. Even RSI has remained in bearish mode during this entire 4-year time period. In fact, RSI in this ratio hasn’t gotten above 65 since 1999. 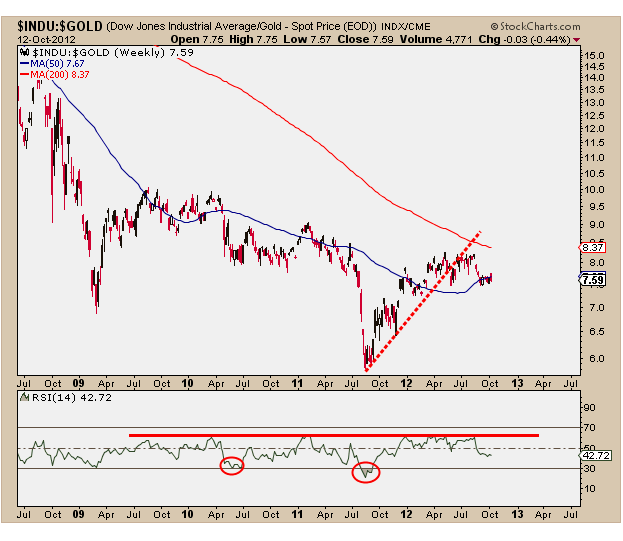 So we’re staying bearish here in this ratio. Remember this has nothing to do with stocks or precious metals on an absolute basis. This is strictly the spread between the two. But as we know, stocks have struggled to make new highs over the last decade while Gold has marched on to record highs. So we’re clearly watching both the numerator and the denominator closely.

Trust me, I wish this weren’t the case. I’d love to see higher stock prices and lower gold. But we can’t trade the market we want, we’re forced to trade the one we have.