I had this published over at MarketWatch today. It’s titled, “Dow Transports Near the End of its Correction”. Here is an excerpt:

It might be about time for the sleeping giant which is the Dow Jones Transportation Average $DJT to finally wake up. If you hadn’t noticed, this thing has done absolutely nothing over the past year. Literally, nothing. The Transports closed out last November at 4946, and here we are a year later just a couple of points above that.

As they say, The bigger the base, the higher in space . And this is one massive base being built since last fall. We saw an impressive rally off the early October lows last year that took the iShares Dow Jones Transportation Average Index Fund $IYT up over 35% in just four months. But since then, it’s been a boring and frustrating sideways correction that was needed to absorb those huge gains. 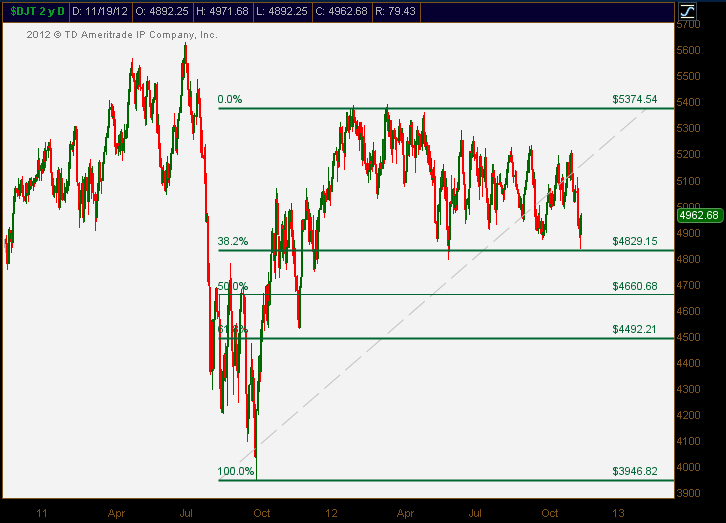 That first correction into June held the 38.2% Fibonacci retracement of the October to February 35% move. And we just saw another retest of that key level last week. Once again, we saw them bounce off it nicely with some pretty solid follow through into Monday. So now it’s caught our attention.

Was that it? Was that the end of the correction in the Transports? No one knows of course, but at least we have a strong point of reference to go by. This is important because the upside in something like this is pretty tremendous. Don’t let the relative underperformance we’ve seen recently fool you. Unlike the Dow Jones Industrial Average and S&P 500, the Transports managed to get back to their 2007 highs last year before correcting. The other guys, not so much. So we know that in the big picture, there is underlying strength here that we just cannot ignore.

Dow Transports Near The End Of It’s Correction (MarketWatch)