With bulls taking control of crypto in the last few weeks, many of the crypto-related equities are showing early signs of life.

Many of these names simply hold Bitcoin on their balance sheet, while for others, the activity taking place in this asset class directly impacts their bottom line.

So it goes without saying that if Bitcoin can sustain a meaningful breakout, it’d serve as a significant tailwind for these names.

Microstrategy is perhaps one of the more direct examples of this thinking, with the CEO taking out hundreds of millions of dollars of debt to add to their growing arsenal of Bitcoin on the company’s balance sheet…

Bears had every chance to drag this thing down below 400, but bulls have driven prices to the verge of new highs:

We’re closely monitoring this 670 level in the coming weeks – not only does this align with former support and resistance, but it represents a critical long-term Fibonacci extension level from the stock’s 2018-2020 decline. Combined with the AVWAP from all-time highs, this is clearly a significant inflection point.

If MSTR is above 670, the bias is higher toward 1,000, which represents the next upward Fibonacci extension target.

You can’t run Bitcoin mining operations without chips and semiconductors. Prior to the crash in Bitcoin’s hash rate following the eventual peak in April, this trend served as a powerful tailwind for Nvidia, among other chip manufacturers.

Here we’re looking at Nvidia’s little cousin, AMD, which has soared to all-time highs on the back of a clean sweep of earnings:

At current levels, it isn’t actionable right now, but it’s great information when we look to Nvidia which is right below all-time highs.

With earnings just around the corner, we wouldn’t be surprised to see Nvidia follow in the path of its little cousin:

But as far as we’re concerned, there’s not a whole lot to do here if Nvidia’s below our achieved upside target of 210.

Below that and we leave it alone – the market seems to be respecting this logical level of overhead supply right now.

But if bulls absorb all this selling pressure and we get a resulting breakout above 210, we’ll be looking to own NVDA with a target up near 320.

As for other less-covered names in this space, here’s the $800M blockchain infrastructure and bitcoin mining company, Bitfarms.

Here we’re showing it listed in Canada, but this name also trades on the Nasdaq:

This name, however, is a bit small for our liking, so we’re simply looking at this for informational purposes, rather than as an actionable trade idea.

But for those that are comfortable trading smaller, less liquid names, the bias is higher toward 9 bucks if we’re above 5.20. The equivalent levels for the Nasdaq listed alternative are 4.20 and 7.20.

Galaxy Digital Holdings is another TSX-listed crypto name. GLXY is an asset management firm that offers institutional investors the ability to invest in the digital asset industry, and they also conduct Bitcoin mining of their own.

With momentum never reaching oversold conditions, now that price is back above all this former support, the bias is higher if we’re above 18.00.

As shown on the left, notice the distinct lack of volume in the upper level of this range? With so few shares changing hands in this area, this has the potential to act as an air bubble of sorts, resulting in less resistance to any upside move.

Tesla’s a name that’s certainly garnered headlines surrounding its involvement with Bitcoin and other digital coins. The overall impact of crypto on its overall business may be a minuscule fraction, but we felt we had to include it considering the traction it’s gained in recent weeks along with the rest of mega-cap tech.

Now that the train looks like it’s left the station, the risk vs reward is a bit stretched up here.

So looking more shorter-term, 700 offers a clean level we can trade against on the long side:

As for some of the other heavy-hitters in the digital industry, most of them remain unactionable for now – chopping around in the middle of messy sideways ranges with little edge on the long side. You can check out the levels we’re watching for some of the other names in a recent post of ours, or in our chartbook we published earlier this week.

But these are the standouts in this space that we’ll be keeping our eye on in the coming weeks.

To wrap up today’s post, we’ll leave you with today’s performance review of the top crypto assets: 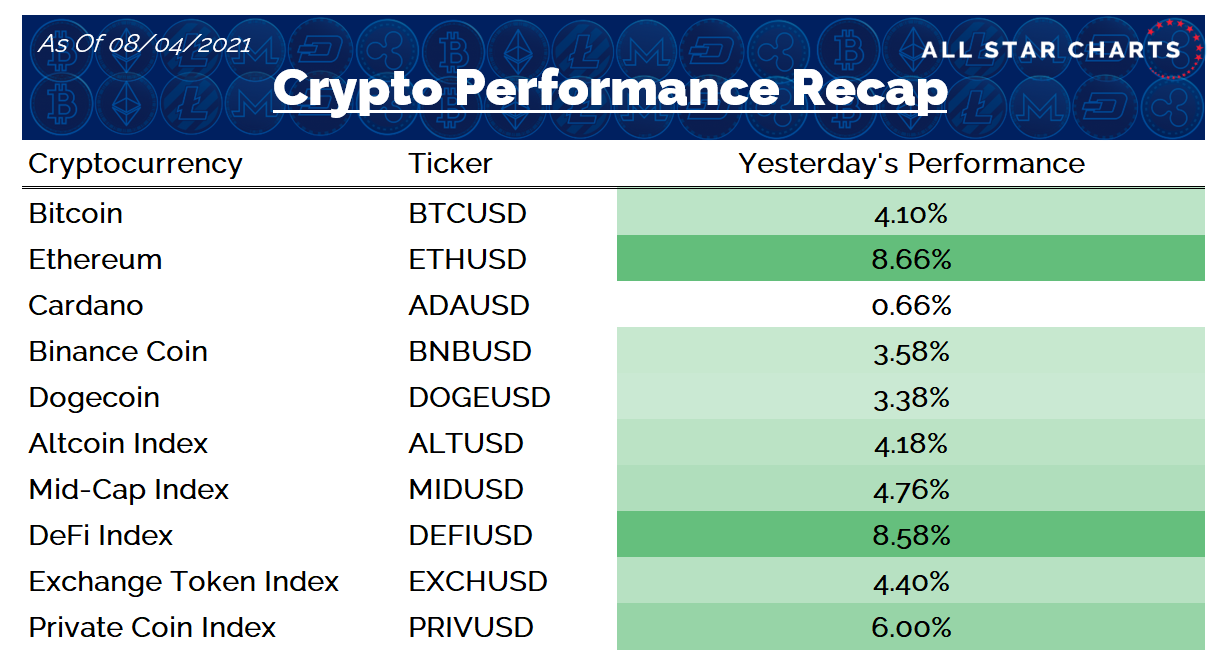 Be sure to let us know if you have any questions at all.