From the desk of Louis Sykes @haumicharts

If you’ve ever been deep in the trenches slinging cryptocurrencies, chances are you’re well aware of the infamous liquidation cascade.

For some traders, the thought will send shivers down their backs.

To others, it represents one of the most profitable asymmetries in supply and demand.

The Chicago Mercantile Exchange (CME) is the largest and most sophisticated derivatives exchange for several traditional financial instruments and Bitcoin futures contracts. But there are stringent rules bounding these contracts:

These rules are essentially a risk-mitigation strategy.

In the case of liquidations, if the account reaches negative equity before the liquidation is finished, the trader is liable for the negative amount.

Further, failure to pay this would result in a bankruptcy proceeding, which the broker has to cover if that isn’t paid.

For the CME, it’s essential to have these tight policies in place.

But in regular cryptocurrency exchanges, there are no such requirements. Anyone can trade on margin with capital as small as $1, and the liquidation process is completely automatic.

In a traditional cryptocurrency derivatives exchange, they offer leverage to its users. This enables traders to enter positions larger than their initial capital.

While this helps them capture gains more significant than what their own funds would permit, they risk getting liquidated and losing their entire capital.

Given that exchanges can’t allow traders to lose money, they forcefully close the position when the position is worthless — i.e., it reaches their “liquidation price.”

So, as the name “liquidation cascade” would suggest, it occurs when liquidations pile on top of each other, causing a sudden and aggressive change in price.

But this market imbalance isn’t just limited to cryptocurrencies. It happens in most other major asset classes.

Take the 1987 stock market crash as an example.

While this is slightly different from the forced mechanism of selling we’ll outline in this post, this is nevertheless what it looks like plotted on a chart:

These events are incredibly rare phenomena in the broad equity indexes. But they’re commonplace in the infant world of cryptocurrencies.

Without circuit breakers bounding these events, the asset class finds itself in a position where the top exchanges need to adapt and find innovative solutions to these series of market failures.

Given the standard limitations of legacy equity markets trading through a single, centralized exchange, cryptocurrencies have a slew of benefits to traders.

But, equally, there are additional risks to be taken into account from exchanges.

Consequently, since the onset of the pandemic, there’s been at least half a dozen of these types of events:

It’s a regular occurrence that we’re treated to headlines like these:

Living rent-free in the head of every crypto trader are past memories trading through these events.

They’ve been so repeatable that the warning signs have been easy to monitor that some traders have made a career at solely trading in the aftermath of these cascades.

But, if we know anything about Bitcoin and the crypto market as a collective, it’s undergoing an aggressive state of maturation.

The infamous liquidation cascade is no exception.

A Brief History of BitMEX

BitMEX largely forged the beginning stages of the Bitcoin derivatives markets. This Vanity Fair piece on the rise and fall of BitMEX explains it in great detail.

Initially, BitMEX had an aggressive liquidation strategy, at least compared to other exchanges at the time a few years ago. A number of factors drove this:

First and foremost, what’s the difference between a partial versus full liquidation approach?

In traditional finance, brokers work with clients if their position falls below their initial margin requirement. By doing this, the broker will manually reduce the size of the position to the point where their balance is above the maintenance margin.

But in crypto, this process is fully automated.

As a result, BitMEX and several other derivative exchanges opted for a full liquidation policy. Whenever the margin balance fell below the maintenance margin, the trader’s position was automatically and fully closed.

This made traders incredibly vulnerable to quick price wicks, where a large market order or any other externality creating a sudden price change could liquidate a trader’s entire account.

Meanwhile, with an incremental liquidation policy, the probability of a liquidation cascade is significantly reduced.

This is achieved by gradually liquidating the position in chunks of approximately 10%,  stopping when the balance is higher than the maintenance margin.

As a result, incremental liquidations are a much softer approach as opposed to getting entirely liquidated on a price wick.

As a testament to the efficacy of this approach, exchanges that have offered this mechanism have had little to no history of resorting to socializing losses among their users.

Whenever BitMEX traders get liquidated, the exchange doesn’t file a market order, but rather a limit order. If the limit orders don’t get filled, the order continually works its way down the order book until there’s a willing buyer/seller.

Exacerbated by the slow blockchain speeds in this volatile period, nobody on the platform had Bitcoin collateral to post to buy these limit orders, even though it was already trading significantly below other markets.

Sam mentions that “these orders would’ve certainly marched to zero over the next hour” had BitMEX not shut down.

This dire market stress is a testament to the impact of this aggressive liquidation policy.

Today, BitMEX now opts for a partial liquidation policy alongside its competitors like FTX, Deribit, and ByBit.

But the image behind the exchange has long tarnished, and so has its share of open interest: 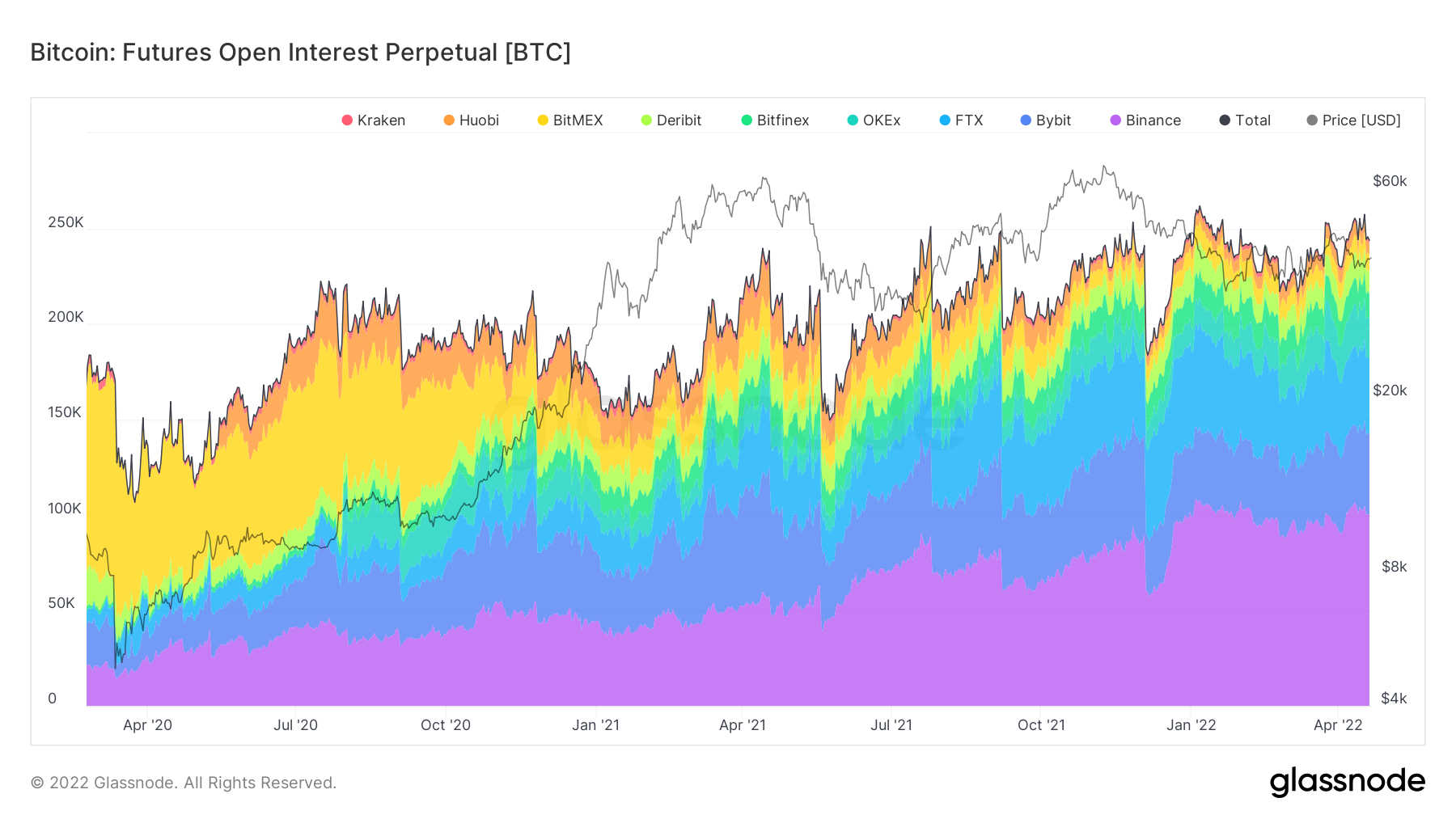 Adding to the further distaste of BitMEX was management. We can reflect this in a number of ways, but there’s no better way to do so than the excess of the insurance funds in this period.

This is a great post for those wanting to learn about crypto derivative insurance funds. In short, insurance funds are a collection of capital the exchange can utilize when there’s a difference between the closing and bankruptcy price in liquidation as a result of market inefficiencies.

While an excessive insurance fund could be seen as a safety net for an exchange in the case of mass liquidations, it’s also a sign that the mechanism driving liquidations is too aggressive.

It can be also be indicative of the exchange’s management reluctance to innovate to improved practices. 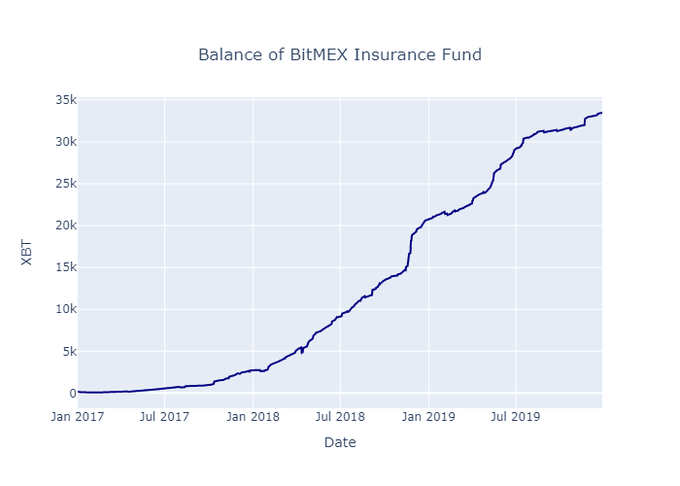 What’s now become a meme in the crypto community is the leaked message from Arthur Hayes, founder of BitMEX, wanting to run the stops of traders on the platform for liquidity to enter into their own positions:

The fall of BitMEX and the rise of new, healthier stewards of the derivative markets is a net positive trend for the safety of betting on cryptocurrency markets.

Another factor to consider in this trend is the growing maturation of the derivative markets themselves.

In a recent post, we noted the role of derivatives in Bitcoin’s adoption S-Curve. You can read it here.

To quantify Bitcoin’s maturation, many tend to focus on standard metrics like user adoption, volatility, and market size.

But the growing market efficiency due in large part to the influx of capital being deployed into yield opportunities via derivatives is another natural progression that I haven’t seen get much attention in this discussion.

Open interest measures the total value of capital currently in open positions. When high, there’s a lot of money tied up in current positions.

Small price swings have the ability to liquidate an increased number of traders, leading to volatility.

Further, we can combine open interest with funding rates to gauge the more aggressive party.

Collectively, this was relatively simple, but a reasonable pair of metrics to help weight the probabilities of a cascade.

But this simple analysis no longer applies to this market or is at least far less accurate than it once was.

As an analyst, your job is only becoming more nuanced and dynamic as the market matures. The old signals that once accurately dictated price action is becoming less actionable time goes on.

This is due in large part to the influx of capital being deployed into yield opportunities. We’re already seeing this in many senses as the number of firms yielding the carry on the basis trade has grown exponentially over the last year.

The end result is that a greater proportion of open value is now being replaced by sophisticated traders in delta neutral positions as opposed to directionally leveraged traders.

On balance, this makes open interest build-ups far less susceptible to a cascade effect as an increasing amount of it is market neutral, and therefore not impacted by price changes.

And as for the perpetual swap market, an area in the derivative markets that’s particularly seen the impact of cascades, more of the perpetual OI is being dominated by sophisticated quant traders arbitrating the yield in funding rates.

They do this in two aspects:

This is only a natural progression if the Bitcoin and crypto market, more generally, is going to continue its quest for maturation.

If current trends are anything to go by, we’d anticipate that the frequency and severity of liquidation cascades to diminish as time goes by.

Without the standard limitations of legacy equity markets trading through a single, centralized exchange, cryptocurrencies have a slew of benefits to traders. But, equally, there are additional risks to be taken into account.

As it stands right now, the underlying market mechanisms are certainly moving in the right direction.

The exchanges that are continuing to make strides in offering the softest liquidation processes are being rewarded. Healthy stewards of the derivative markets have stepped forward to fill the void left by BitMEX.

However, given this asset class’s innovative nature, chances are we’ll see further developments along with this trend toward stability.

There are a number of derivative platforms looking to manage this process both away from the exchange and on-chain to limit the impact of cascading liquidations on the order book, dampening the effect on the market.

Further, the growing share of open interest being deployed into yield opportunities as opposed to directionally leveraged positions will make leverage build-ups far less susceptible to a cascade effect.

If this asset class is going to mature and institutional adoption continues ramping up, I think it’s only natural we expect cascades to eventually become a distant memory.

Thanks for reading, and please let us know if you have any questions!