Looks to me like we might have a bottom on our hands in the crude oil market.

I really dislike trading oil. The chart is a mess and it just feels like the best traders in the world are battling it out in this market that I usually prefer to stay away from. I know we talk about the Crude Oil vs Nat Gas ratio all the time, and that’s simply because the chart is a lot cleaner. It makes more sense from a risk/reward perspective to be in that market. But generally speaking, the Oil chart has just been a mess for a long time. And fortunately for me, no one has a gun to my head making me trade anything that I don’t want to.

But after further review, it looks like the bottom in Oil could be in. I think this $81 level is the “real” support for this market. I say this primarily because of the divergence that took place in the 3rd quarter last year. Look at this line chart of Crude Oil closing prices. Notice how when Oil made a lower low into early October, this was a short and sweet false breakdown that resulted in a 40%+ move higher in under 5 months. That’s a monster move folks. So the “real” support, in my opinion, which held at the August low is the level which seems to be most important. And this is where the low in Oil was put in last week: 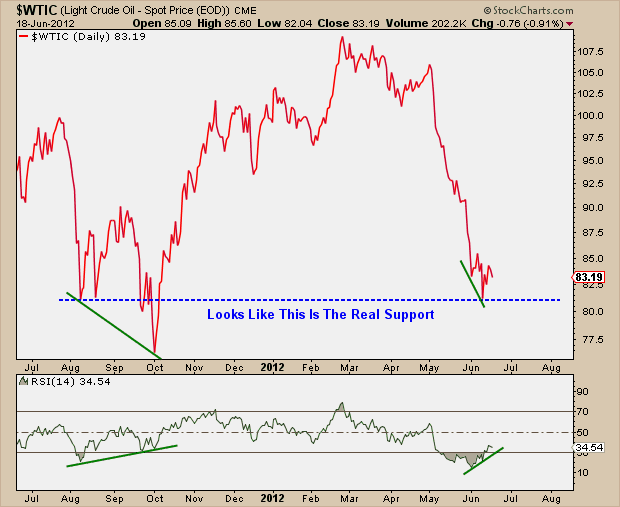 Next, let’s look at momentum. Notice how that false breakdown in Oil going into October last year was done while the Relative Strength Index that we love so much was already putting in higher lows. That bullish divergence came at the same time that stocks were showing the exact same divergences. We’ve talked about this several times. It wasn’t a coincidence that this phenomenon occurred simultaneously.

Currently, while prices of crude oil made lower lows last week down to $81, RSI had already turned higher. And stocks have been showing the exact same bullish divergences. Sound familiar?