One of my favorite measures of market strength is the ratio between Consumer Discretionary names vs the more defensive Consumer Staples sector. This indicator has given us a nice ‘heads up’ a few times in recent years. Last April, for example, this ratio started to roll over and break down as the S&P500 was still making new highs. This bearish divergence was a warning of underlying weakness in the stock market.

Then in October, while the S&P500 was still making fresh lows, the $XLY:$XLP ratio was holding its own. This bullish divergence came just before the monster rally that we see before us. And most recently, at the end of January the ratio made new highs, taking out the peak from late October confirming the new highs made by the S&P500: 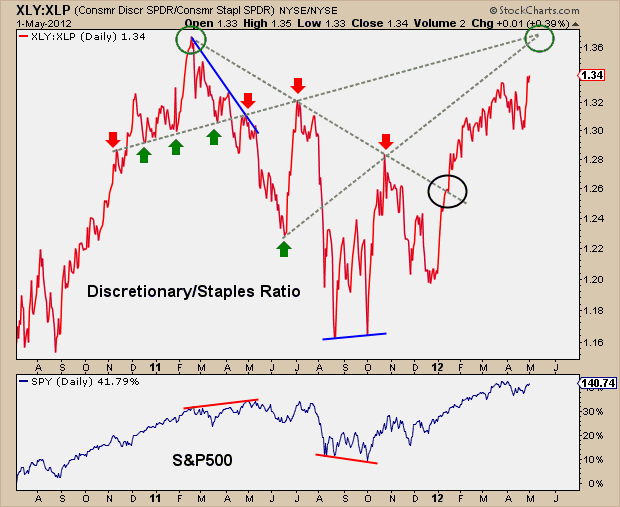 So today, while the S&Ps are approaching last months highs, the Dow Jones Industrial Average is already making new highs, and the other major averages are just a couple of percentage points away, the $XLY:$XLP ratio is the clear leader closing at the highest levels since early last year.

So how high can it go? I think the prudent thing to do is let our old trendlines extend to today. That key uptrend line that was broken last year just before the Stock market averages broke is currently coming into play. Depending on how long it takes the ratio to get up there, we’re looking at a target of between 1.36-1.37 in the near-term. This would take us to the 2011 highs and signals further strength in equities and other “risk-on” assets. In addition, the trendline from the June lows last year connecting the October highs brings us to the same price target.

We still need to watch the closing highs from March 26th. Although we are making fresh highs in the ratio and momentum is still showing a positive trend, false moves can be dangerous. If these new highs cannot hold, I would get more cautious. But as long as these new highs hold here, and it appears as though this will be the case, I would expect the trend of higher highs in equities to continue.