This is a big question going around some of my circles these days. I’ve heard valid arguments from both sides. The bulls are convinced that any dip, or even pause, is an opportunity to just buy US Stocks. And the bears are convinced (and have been) that the rally can’t keep going like this without correcting first. The last few weeks of trading have caused both of these camps to question their conviction. At least that’s how it appears from where I’m sitting.

As you guys know, I try not to be a bull or a bear, but just take what the market gives us and look for good risk/reward opportunities that way. Most of the time, my positions have nothing to do with the direction of the S&P500. But it’s important to have an idea of which way we’re headed, especially if the resolution out of this might be to the downside. You see, during violent sell-offs, it doesn’t matter how “good” your stock is, or how much cash it has on the books, or how many times momentum has confirmed new highs. When assets are being liquidated and your stock, or commodity becomes a “source of funds”, they will sell your stock harder than you could ever imagine. This happens much less often on the way up.

So? Is this a consolidation in the S&P500 before a new leg higher? Or was that it? Was that the bull market?

Well, we want to take a look at the components that make up the “stock market”. When this market of stocks is making new highs, you want to see participation by its components (or the actual stocks, if you will) widening with each leg higher. When you see less stocks participating, that’s telling us that internally, the “market of stocks” is not as strong as it once was. It’s that simple.

Here is the list of NYSE new 52-week highs getting shorter and shorter with each new market high: 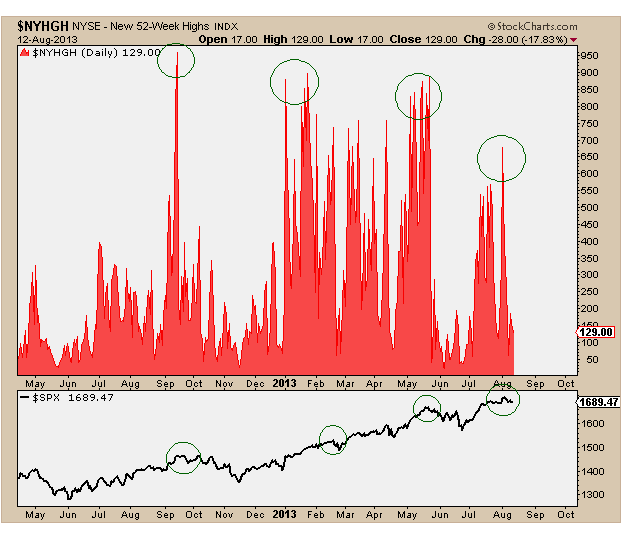 So we know the internals are weakening, but they’ve been weakening all year so this is nothing new. How about from a pure price perspective? Do we have a big line in the sand? Where do we need to break out from in order to confirm a new leg higher? What about sector rotation – are the right areas leading us?

These are all questions that I’m constantly asking myself. And over the time, the answers have changed. Here is the chart of the S&P500 Index and the consolidation that has become a big topic of conversation lately. To me, a break below the 1670 level would be a big negative for this market. This level represents the mid-July lows, so a break would create the first set of “lower lows”. But more importantly, this level also represents the closing highs from back in May. Failure to remain above those highs could be costly. To the upside, the market needs to see new highs and resolve this consolidation higher to signal a new leg. 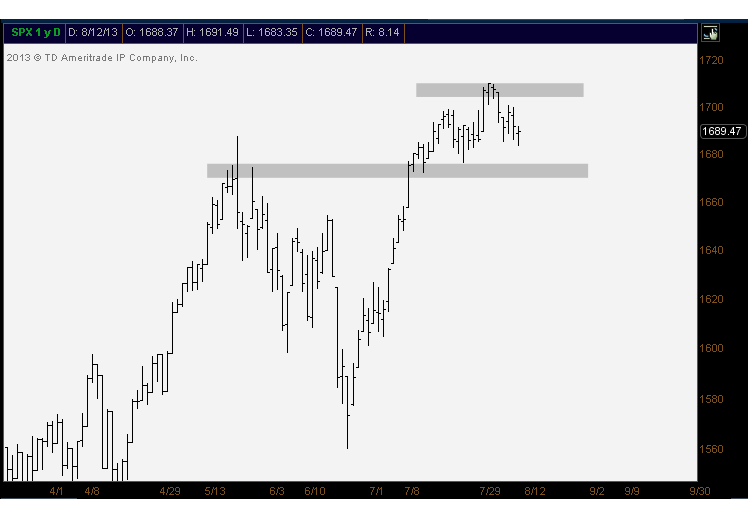 But what about leadership? Markets love having leaders. Who are they up here? The weakness we are seeing has been predominantly from Financials. That’s not good, and it’s not anything we’ve seen consistently this year either. In fact, financials have been the best performing sector in the US over the last year. And not #2 or #3, Numero uno amigos!

Here is a chart of each S&P sector relative to the rest of the market. Notice how financials (“the leaders”) have actually been the worst performing sector over the past month. The worst: 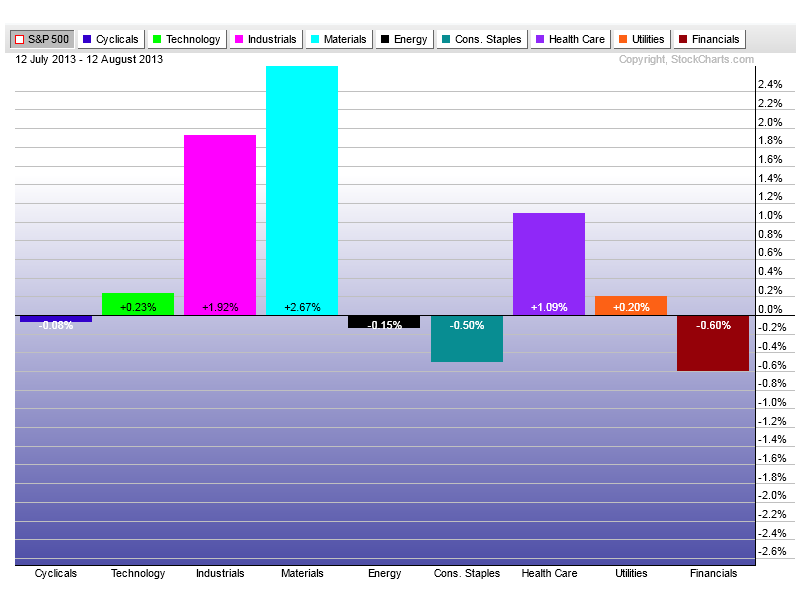 So what do the bulls need? To take out the July highs and new leadership must emerge, whether it be financials again, semi’s, tech, etc. We don’t have that right now. The list of new highs also needs to start expanding. I keep hearing how broad this market rally has been. But the stats tell a different story.

The bears? They need a break below 1670 and hold it – no false breakdowns. Bears also want to see financials continue to underperform. Regional banks ($KRE) breaking below Monday’s lows near 36.50 would be another feather in the hat for the bears.

So that’s how I see things right now. What do you guys think?