Bitcoin seems to be the hot topic these days. I send out a couple of bitcoin charts and the twitterati goes wild. It’s a quick tell that there is certainly interest. It was not quite like this before Bitcoin was able to exceed the 2013 highs. But once prices got going and all-time highs became a regular thing, the cults start to follow.

Contrary to popular belief, the price of Bitcoin hasn’t just gone straight up. The cryptocurrency, in fact, has gone through a series of very symmetrical and well-defined corrections along the way. Today we’re taking a look at Bitcoin from multiple time horizons to get both long-term and short-term perspective using our Fibonacci tools.

When it comes to setting traditional prices targets and risk management levels, it becomes a challenge when the stock or asset in question has never traded there. In other words, where do we look for overhead supply when we’re in uncharted territory? We use the Fibonacci sequence for this purpose. You can learn more about my Fibonacci calculations and applications here.

Once prices earlier this year exceeded the 2013 highs, the next logical level was approximately 1875, which is the 161.8% extension of the entire 2013-2015 decline. These levels can act as both support and resistance. In this case, Bitcoin prices exceeded 1875 to reach the 2930 level, which is the 261.8% extension. Notice how prices then came back down to successfully retest that 1875 level, acknowledging the new found support. Remember, these levels were not drawn after the fact. The calculations were done prior. It’s just that the levels match up so perfectly that it’s hard for some to believe that this is simply normal behavior and is to be expected: 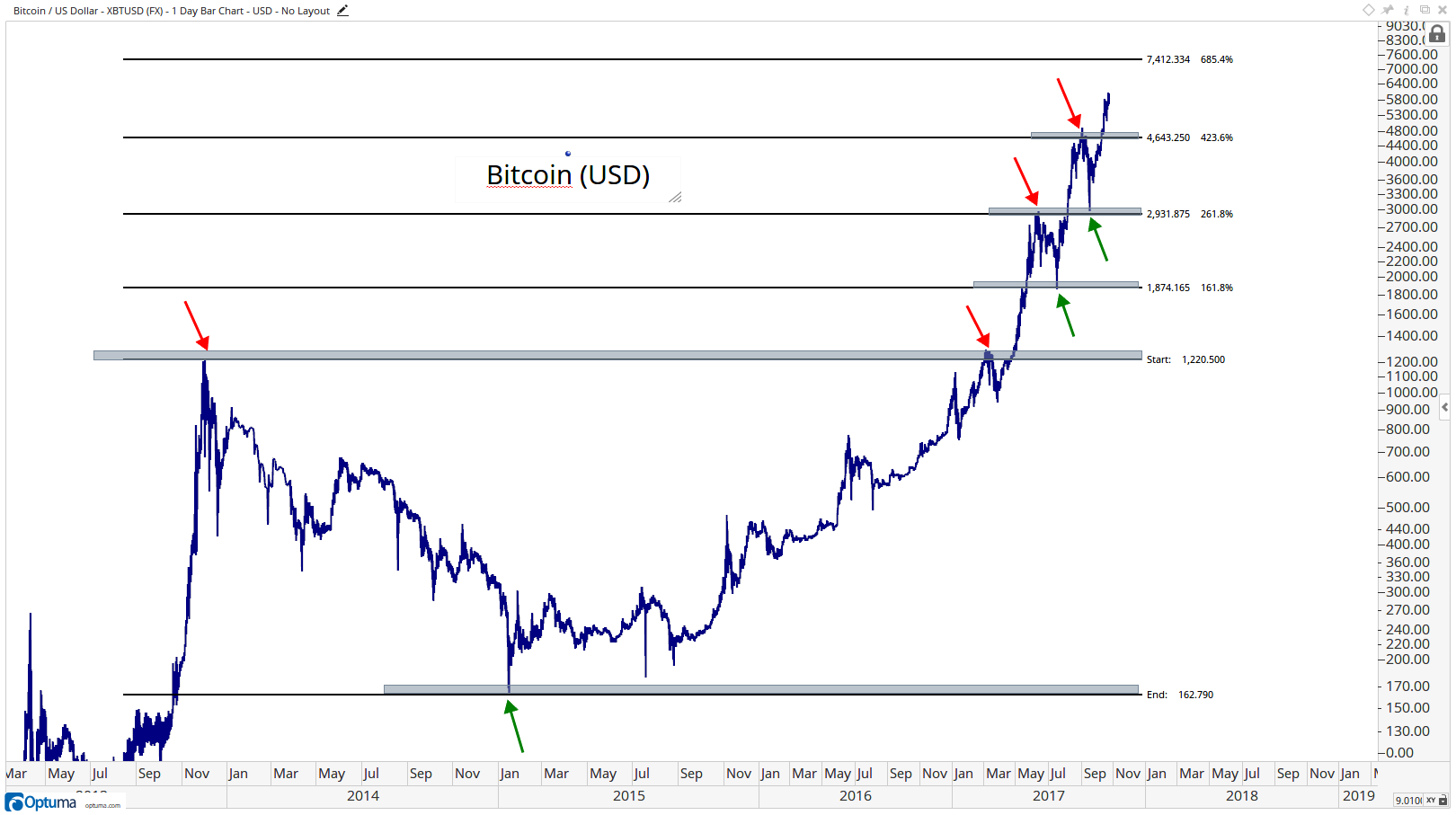 After that retest of 1875 this Summer, prices went on to break out once again above the former highs near 2930 resistance. The 423.6% extension of the the 2013-2015 decline is approximately 4640. This Fibonacci sequence became resistance once again. It’s impossible to ignore the fact that following that 4640 level being met, prices returned to the 2930 support level and retested that 261.8% extension that had formerly served as resistance. This is almost to the penny.

In case you missed it, Fortune picked up on this over the weekend and shared my charts with their audience. It’s nice to see they appreciate a good Fibonacci extension:

In Parets’ chart above, he shows that Bitcoin’s rallies, since the price surpassed its 2013 high, have followed a similar pattern, where each new leg up corresponds to a percentage increase as predicted by the Fibonacci series.

The prediction only holds, Parets maintains, if the Bitcoin price remains above roughly $4,700. But as long as it does, he believes Bitcoin could rise to at least about $7,400, as indicated in the chart. For now, though, Parets is giving Bitcoin a more conservative price target: $6,500.

Looking a bit more tactical, that 4600-4700 level looks important. Not only does it mark the 423.6% extension from the 2013 decline, as mentioned above, but it also represents the 261.8% extension of the Summer correction from June and July. This makes that support very critical. If we’re below that, then this is not something we want to be involved with from the long side. 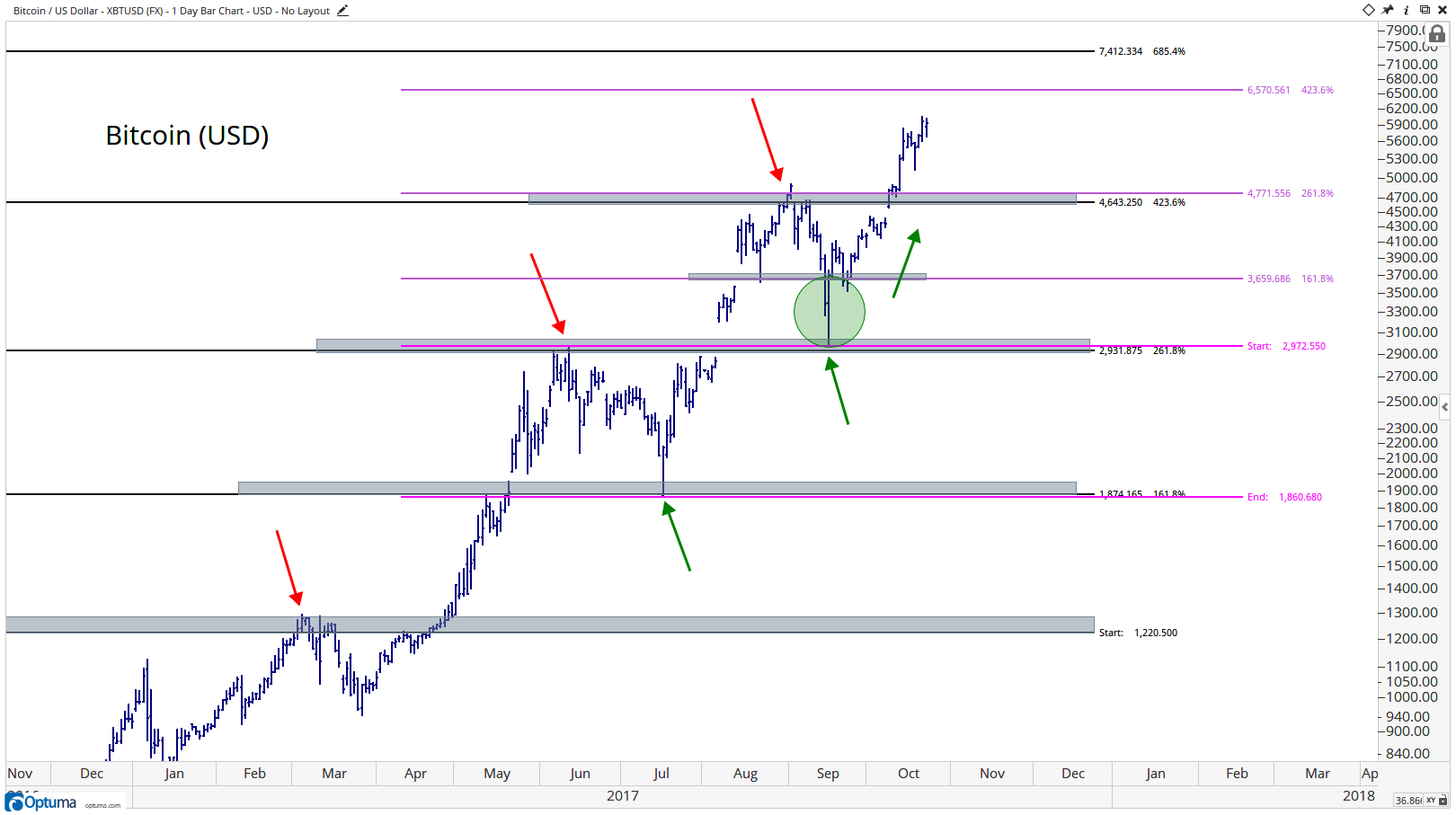 While “longer-term” that 7400 area continues to be a solid target, 6570 is the next level of significance from a shorter-term perspective. There is a lot of talk about Bitcoin being a bubble or some sort of conspiracy or something. I don’t know about all that. What I do know is that this is a liquid enough market for a lot of us to participate in and it behaves incredibly well with respect to the supply and demand dynamics that we’ve experienced in other markets. This is a trade just like anything else:

If you told me this was Crude Oil or Gold or shares of Microsoft, I’d say we need to buy any weakness towards 4700 and be long only if we remain above that. So the fact that this is Bitcoin doesn’t change that. The path of least resistance here is higher, in my opinion, regardless of what the underlying asset may be.