Most of you who know me already know that I incorporate a top/down, weight-of-the-evidence approach. It’s not just 1 chart or 1 indicator that says to be long or short the stock market. It doesn’t work that way. For me, I put in the work, weigh ALL of the evidence, and then put together a thesis. From there we then look to execute. Since March, however, a more neutral approach towards stocks has been my big theme. As we come into May, I see no evidence that suggests changing that strategy. Cash heavy still makes sense until the data changes and points to allocating that cash once again, long or short.

Today I want to go over a chart that I think the US Stock Market bulls are going to love. To me, it is potentially the most bullish chart in the entire world. 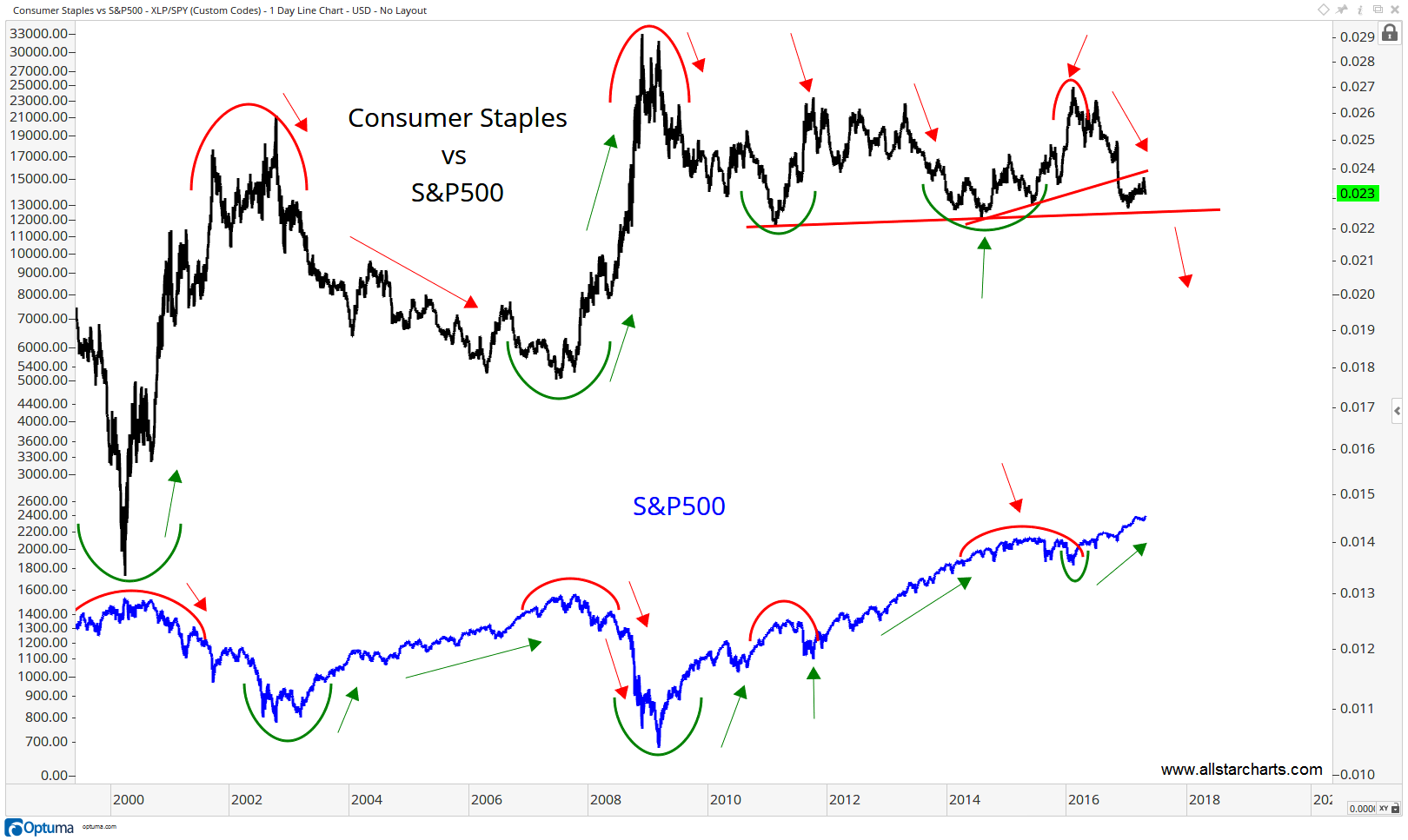 Notice how the peak in stocks in 2000 was the bottom of the Staples/S&P500 Ratio. The bottom in 2002 and 2003 coincided with a top in the ratio. During the entire 2003-2007 rally in the S&P500, the ratio was declining until it bottomed in 2007, just as the S&P500 was putting in its peak. During the entire 2008 market crash, the Staples/S&P500 ratio was exploding higher as money flowed into that relative safety trade. Notice how the ratio then peaked in early 2009 just as the S&P500 was bottoming out. Since then, the S&P500 has been rallying while the ratio has been declining .You can even see the counter-trend moves during that period had perfect negative correlations between the ratio and the actual S&P500.

So why is this potentially the most bullish chart on earth? Well, based on the strong negative correlation here that we have seen throughout history, if this ratio breaks down, it would be a signal of risk appetite, not risk aversion. We want to be watching this chart moving forward to see if the XLP/SPY ratio breaks this key support going back 5-6 years.

I think it’s a bit early to make that call, but the path of least resistance here is lower, not higher. So if and when we do get a break in XLP/SPY, I think that will be evidence that institutions are positioning themselves for another leg higher in the S&P500. Until then, I think it’s a big one to watch and arguably the Most Bullish Chart In The World…..IF it breaks.

Want updates on this chart? Start a RISK FREE trial here if you’re not already a member of Allstarcharts.