Canadian Dollars have been one of my favorite shorts around the world for a long long time. We are talking about one of the most beautiful bases I’ve ever seen in my career. The old sayings are, “The bigger the base, the higher in space” and, “The bigger the top, the bigger the drop”. I learned these from technical legend Louise Yamada who told me she picked these up from Alan Shaw, retired technician and legend in his own right. In the case of Canadian Dollars, the big top took place between 2009-2013, while the huge base could be seen in USD/CAD but both had the same implications (see base here). All targets have been achieved and now I believe it’s time for a change in direction.

First of all, let’s take a look at USD/CAD from the long-term to get structural perspective. This one is very clear: we’ve run right into the 61.8% Fibonacci retracement of the entire 2002-2007 decline. We kissed this level over the past week and it can be seen in this monthly bar chart: 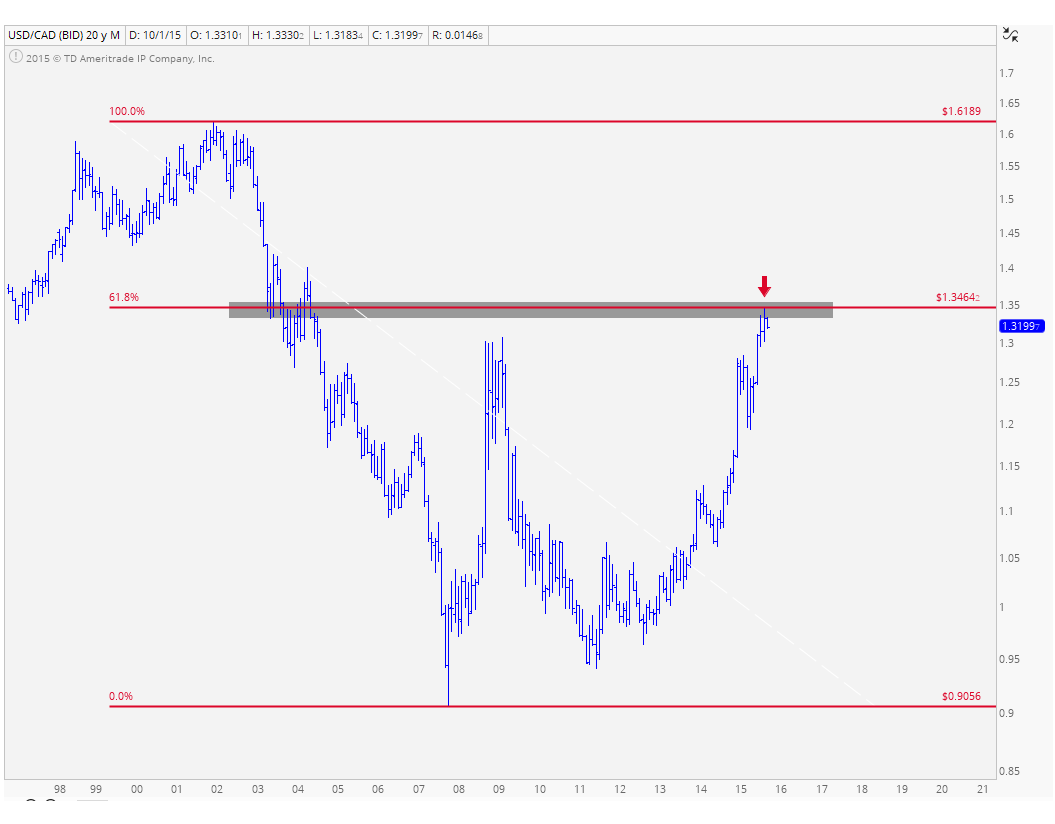 Here is the weekly timeframe showing prices slightly exceeding the 2008-2009 highs in order to achieve this Fibonacci retracement target seen in the chart above. This one has “Failed Breakout” written all over it and we’re seeing confirmation of this with momentum putting in a bearish divergence at these recent highs. This could get ugly quickly and a break back below those 2008-2009 highs would be the catalyst to really get this going to the downside: 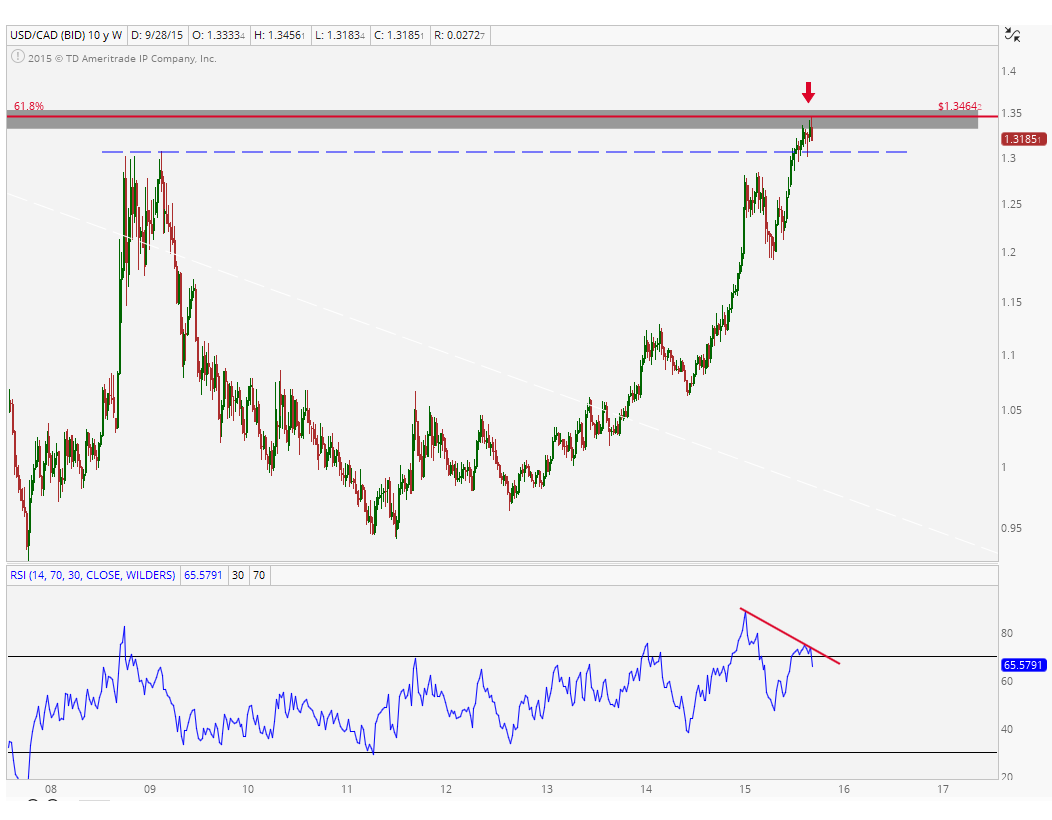 Finally, here is a short-term daily chart showing prices recently hitting that key 61.8% Fibonacci retracement of the 2002-2007 decline (red dashed line). This level also coincides with the 161.8% Fibonacci extension of the most recent correction which took place this Spring. Long-time readers know that it’s when these Fibonacci levels cluster together like this that I really start to pay attention. Momentum is also putting in bearish momentum divergences all year putting in lower highs with each new high in price: 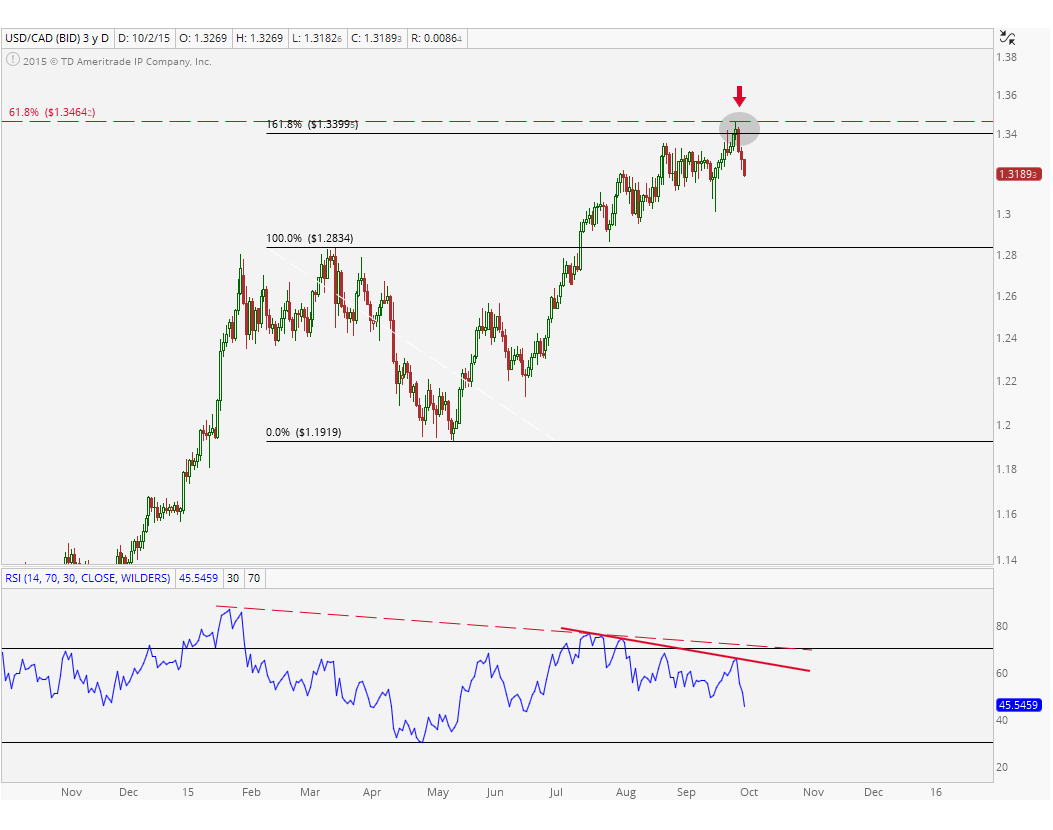 I’m a weight-of-the-evidence guy. To me, the bearish implications here for USD/CAD (bullish for Canadian Dollar Futures) are very skewed in one direction. Price-wise this is a buy 100 times out of 100. The Commercial Hedgers, who we consider the smart money, are pretty much as long as they’ve ever been. Sentiment-wise, our data suggests that Canadian Dollars today are more hated then they have ever been (our data goes back 25 years). What more can you ask for?

Risk management-wise, which is the most important thing, I think the market has made it very clear for us. We only want to be long Canadian Dollars if we are above this week’s lows. That’s it. Below that and there is nothing to talk about. In the case of shorting USD/CAD, we only want to be short below this week’s highs. It’s that simple. Target-wise, sentiment unwinds like this can be very powerful and can take a long time to complete. I would be very patient here taking profits as I think this one has a long way to go.

REGISTER HERE to receive weekly updates on each of these charts along with 16 Commodities futures on multiple timeframes and analysis on 10 more of the major Currency crosses.