On the daily chart spanning back to last August I outlined the relevant downside targets for the intermediate term. As my notes indicate, the stock recently met both the tactical and structural downside price targets of 14.30 and 13.15 respectively, and quickly reversed. The day following its earnings report the stock opened, and managed to close well above, the after-hours lows and followed through with an 11% move to the upside on Friday. 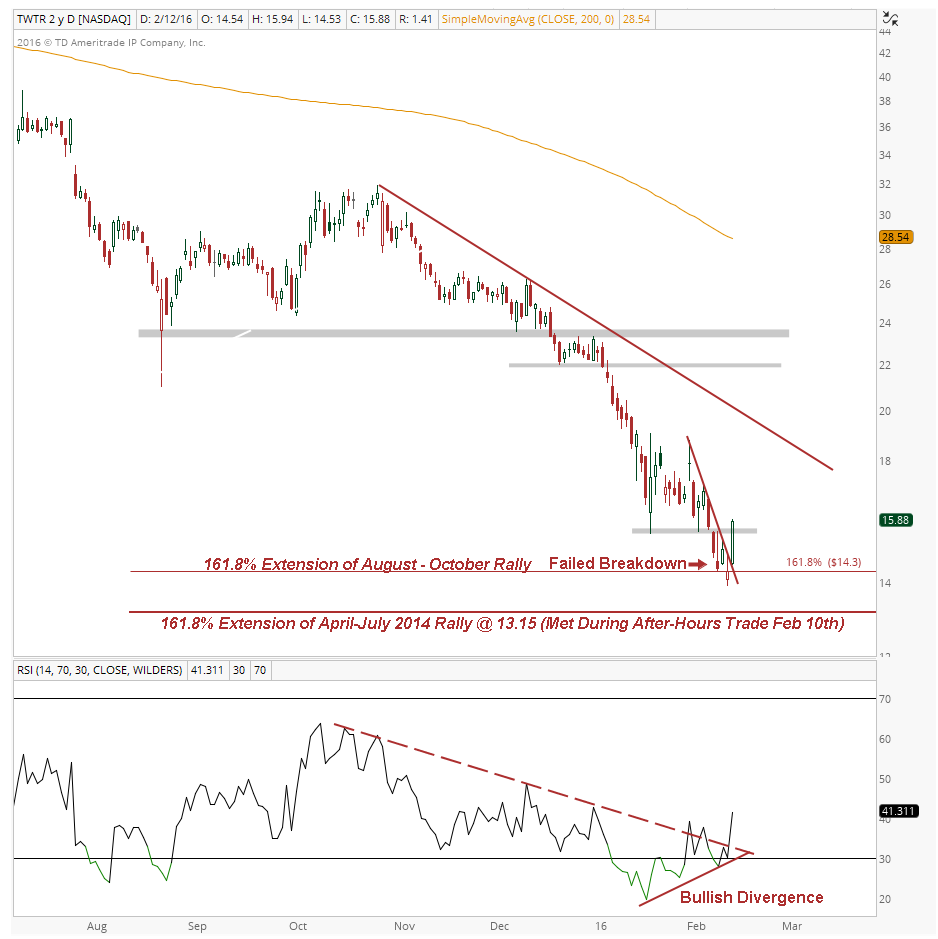 Twitter closed out the week above the January lows, confirming the bullish divergence in momentum and solidifying the failed breakdown. With prices roughly 80% below their 200 day moving average, this stock has a lot of room to squeeze to the upside if it can continue to hold above the January lows.

Despite the improvement in the stock on an absolute basis, I think the real story is what’s occurring relative to the rest of the social media sector.

Here is a daily chart of Twitter vs the Global X Social Media Index Fund ($SOCL) over the last nine months. In other words, Twitter compared with the rest of the social media stocks: 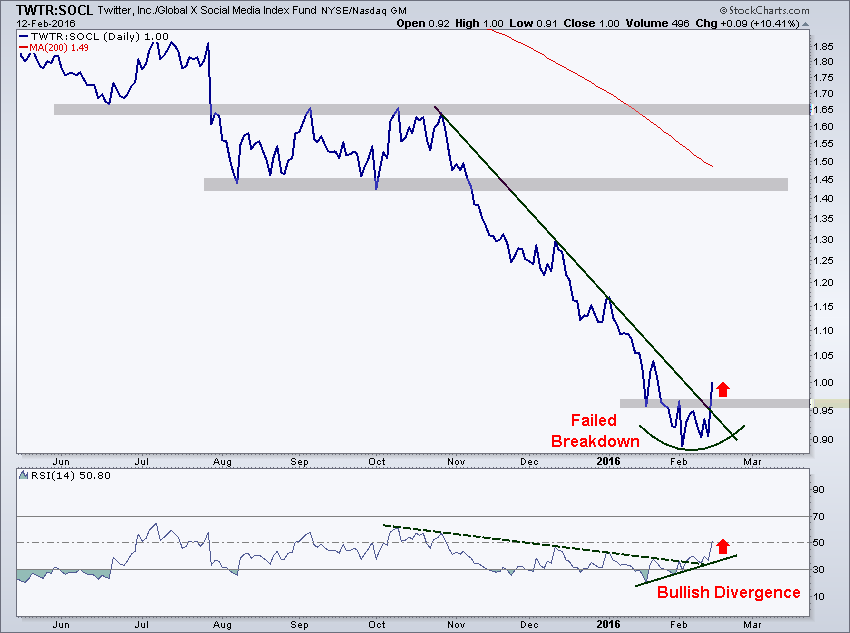 Given its aggressive downtrend on an absolute basis, it should be no surprise that Twitter has been in a steep downtrend relative to the rest of the social media stocks as a group for a while. In mid-January this ratio made new lows while momentum put in a higher low, suggesting that a potential reversal might be in the works. With last week’s action, this ratio broke out above the January lows and downtrend line from the October highs to confirm the bullish momentum divergence and failed breakdown.

This ratio is nearly 50% away from its 200 day moving average, suggesting there is a lot of room for mean reversion. If prices can continue to hold above January lows, I think this ratio has the potential to rally 40% toward the August and October lows outlined in gray.

The Bottom Line: The weight of evidence suggests that Twitter has put in a tradable bottom on an absolute and relative basis. Given that the stock is nearly 25% off of the after-hours lows from Wednesday 02/10/2016, I think the better risk/reward in this scenario is on a relative basis.

On an absolute basis, longs can look to take profits near the downtrend line from the October highs near 19, and prior areas of support at 22 and 23.50.

On a relative basis, longs can look to take profits near the August and October lows outlined in gray near 1.40-1.45.

In either case, the January lows are the line in the sand from a risk management perspective.

JC Here – I agree with everything Bruni sees here and wrote a similar note to All Star Charts Members this month highlighting the key level to watch. I like the relative chart here where Bruni compares Twitter with the Social Media Index. It makes a lot of sense. The most important part here is the risk is very well defined. You know where you’re right, you know where you’re wrong, and you know this immediately. That to us is all that really matters. Nice job Bruni.