The US Dollar is one of the more fascinating markets today. There are so many things going on currently that I think it’s hard to just group them all together. Remember there are several components that make up the overall index, so today I wanted to breakdown the different pieces and see how they fit together to make up the entire basket. We’ll focus on the biggest 4 names and see what we can learn from what is currently going on.

First here is the US Dollar Index itself consolidating nicely above the upper of these two converging trendlines since the 2005 highs. I have to say that as long as we’re above this downtrend line, there is no reason to be bearish this currency basket. In addition, the longer it remains above the downtrend line, the more likely that this breakout is for real. Momentum in a bullish range since 2011 and now confirming that as it enters overbought conditions is another positive for the US Dollar Index as a whole (see here for more on US Dollar): 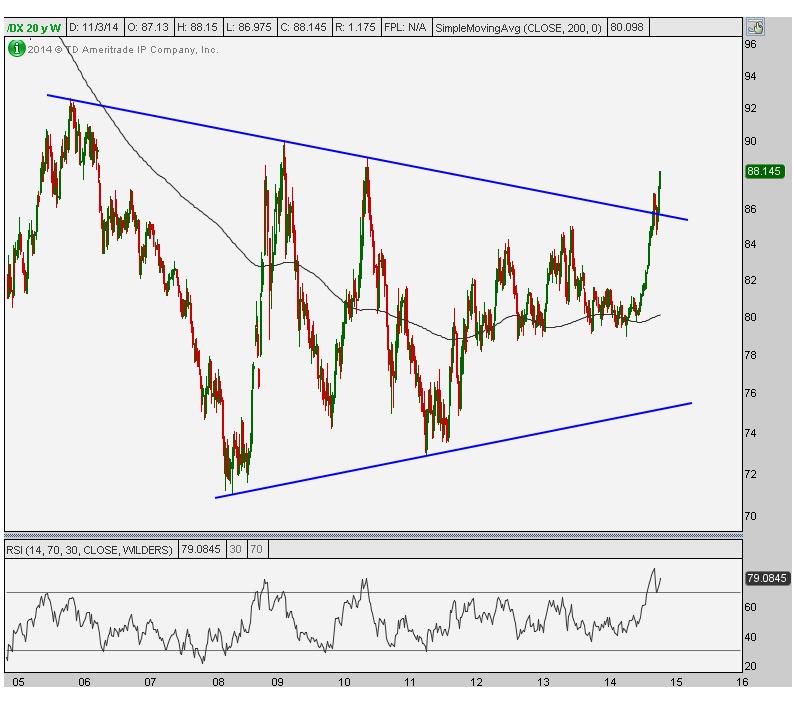 The Euro is something very interesting here. We do a lot of sentiment analysis and they really loved this thing in May; at the worst possible time. Now that the Euro has gotten crushed, the sentiment is at levels not seen since Summer 2012, right before the Euro exploded higher into year end. So we try and look at this market to see where we might find the beginning of a mean reversion trade.  We’ll look at the Daily chart since it is the most actionable based on current sentiment. Here we can see EURUSD rolling over to new lows and approaching the breakout level from 2012. If Euro can manage to find some support here as momentum continues to positively diverge, this would be a nice entry point on a long. Good risk/reward. But if this breaks, which there’s no way to tell at this point, we could potentially see the 2012 lows. What would worry me about that scenario is that the potential bullish divergence we’re watching may not play out, making this a lower probability long. So this is what I see. We’ll wait for a setup to come, if it ever does. If not, no big deal (see here for more on Euro): 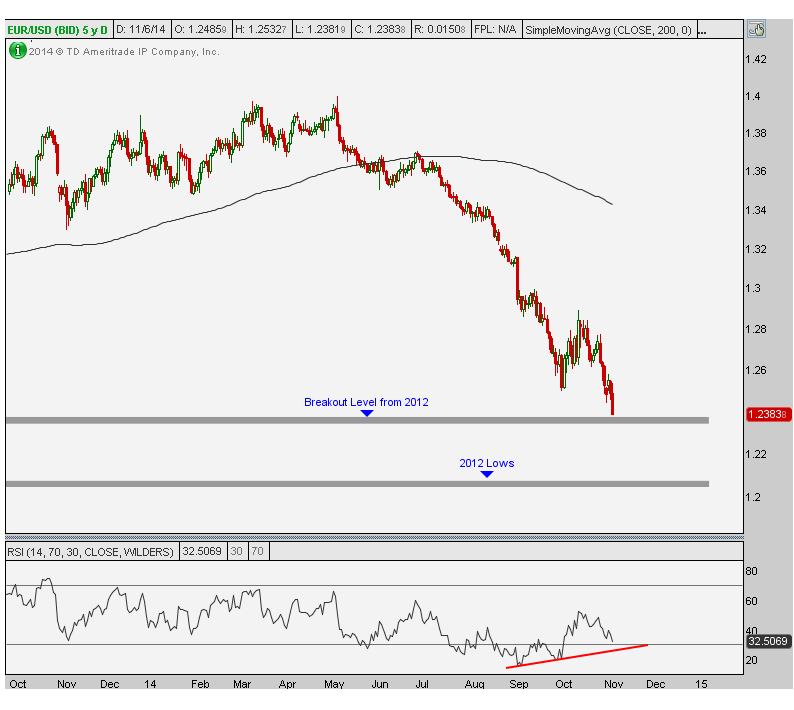 The next interesting component I see is the British Pound. I’ve been watching this big downtrend line from the highs in 2009. It looked like after a nice breakout last year, we could potentially see a nice recognition of that former support and allow for demand to take over at that trendline. Well that certainly did not happen as prices continue to fall through that and approach former support from last year (shaded gray) and 61.8% Fibonacci retracement from the 2013-2014 rally. This is something we would only consider being long if we were above that blue downtrend line. Momentum hitting oversold conditions in the recent sell-off is another feather in the hat for the bears. With a flat 200-week moving average, a lack of trend at best is likely here for now. I’m only interested above the blue downtrend line (See here for more on British Pounds): 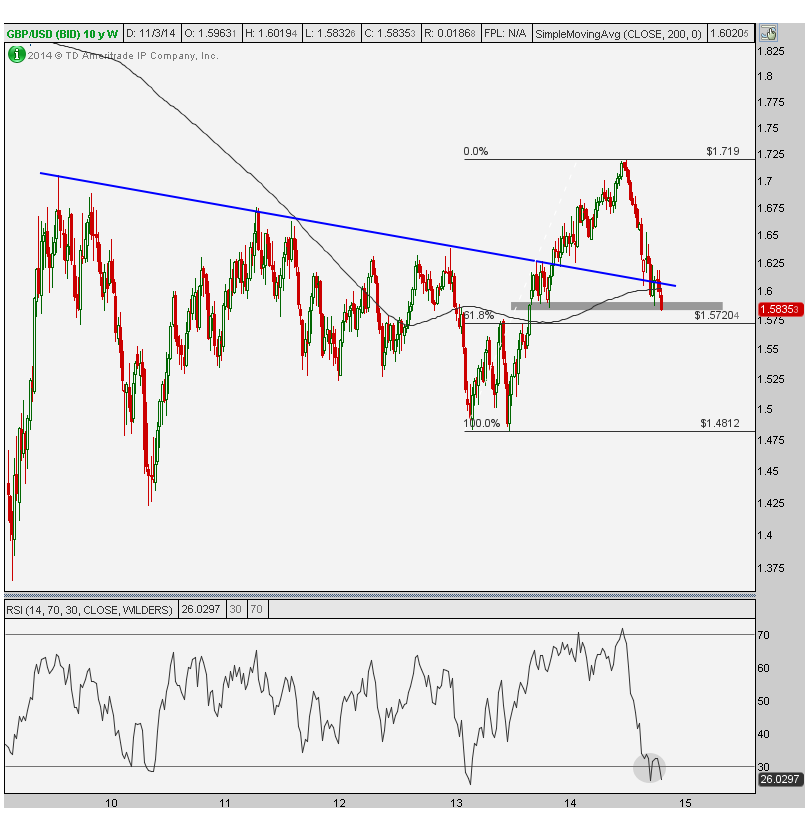 One of the most incredible moves in recent years has clearly come from the Yen. The Japanese are absolutely destroying their currency over there. After the initial breakout from this symmetric triangle a year ago, prices stalled at the 61.8% Fibonacci retracement from the 2007-2011 decline. But notice how the acknowledgement of that supply came through a sideways consolidation and not through a downside correction. This is the stronger of two ways for prices to correct, in this case through time rather than through price. After breaking out again in August, prices retested that level last month successfully and we’ve been off to the races ever since. We are now above the 161.8% Fibonacci extension from that symmetrical triangle last year, which also represents the highs in August of 2008. Our next target is up near 120 based on the 2.618 extension of that triangle. I think that’s where we’re headed next. With momentum in a solid bullish range, there is no reason not to be bullish USDJPY unless we break back below the August 2008 highs, where a more neutral approach would be best. 120 here we come (See here for more on Yen): 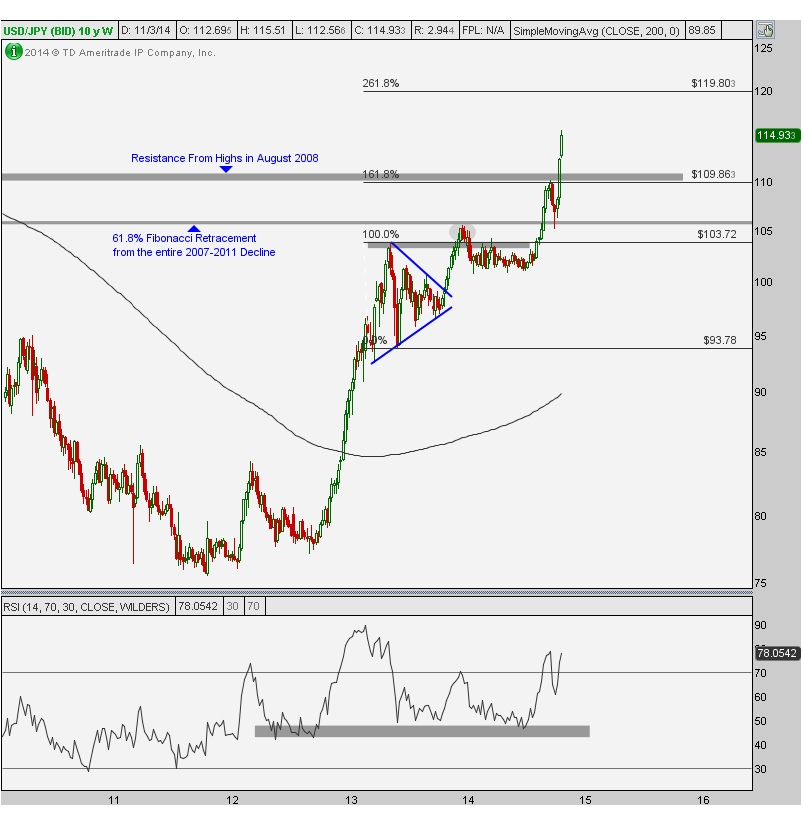 And finally, this one has to be one of my favorite charts in the world. I love big bases. Is there a nicer base than USDCAD over the past several years? From a structural perspective, this is one that I talk about and write about constantly, for obvious reasons. We have big rounding bottom since 2010, a nice breakout at the end of last year, a successful retest of former resistance, momentum in a bullish range and now we’re ripping to new highs above the 161.8% Fibonacci extension from the 2011-2012 decline that was acknowledged by the sellers this March. The next target is above 116 which represents the 61.8% Fibonacci retracement from the 2009-2011 decline (See here for more on Canadian Dollars): 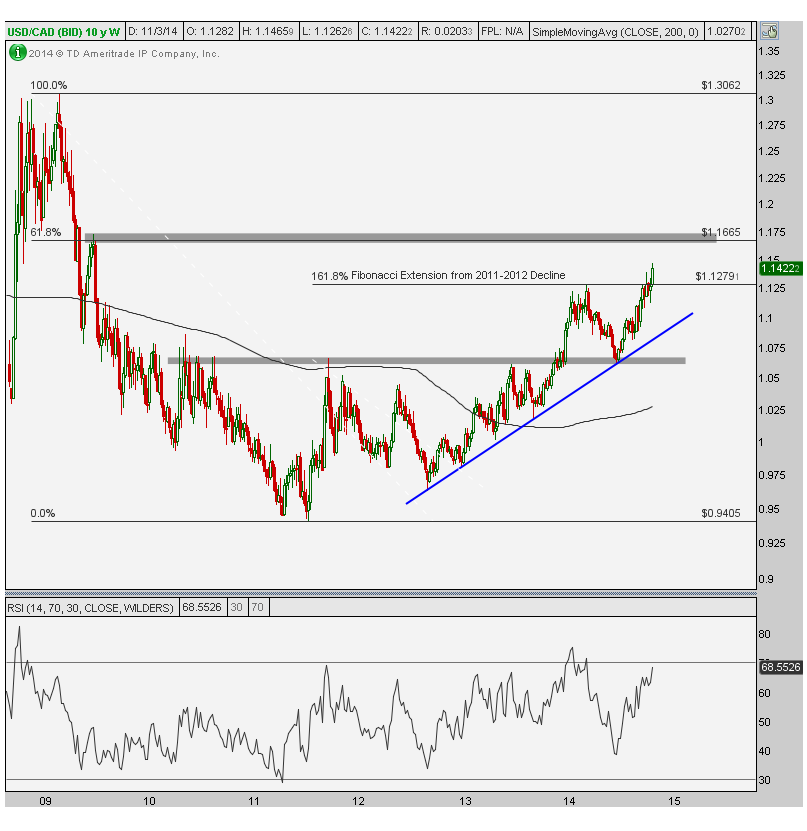 So all in all, the Dollar is still the stronger side of all of these fractions. I see no reason to be short the Dollar Index here, particularly with this much strength vs the CAD and YEN. I think the Euro can set up a mean reversion soon, but we’re just not there yet. I’m looking at that specific market tactically and the rest more structurally for the purposes of this discussion. But Members of Eagle Bay Solutions receive all of these charts, but with additional timeframes and variables every week with annotated charts and commentary based on recent action as well as from a structural perspective. Make sure you are registered to receive these Currency and Commodities Reports.