Mary Ann Bartels and Stephen Suttmeier, Technical Analysts at Bank of America, wrote in a report today that the S&P500 may slump as much as 21% as volatility on the benchmark measure continues. A low of 910 on $SPX is not out of the question, according to the analysts.

Here are a few quotes from the Bloomberg article:

“We are more concerned now that the downside risk could be more than we originally forecast,” Bartels and Suttmeier wrote. “Measured moves suggest 985-910 on the S&P 500 is a potential range where a market bottom may finally be found.”

“We expect several more months of volatility and once a bottom is made it will take months to build a base to repair the equity market — this could carry over into 2012,” Bartels wrote. “The violent swings within the market are more typical of a bear market than a bull market. We suggest using rallies to raise cash and or become more defensive until our trip wire to a bottom generates a buy signal.”

Here is the S&P500 chart going back to the beginning of the bull market. I included the Fibonacci retracements to help put $BAC ‘s analysts targets into perspective: 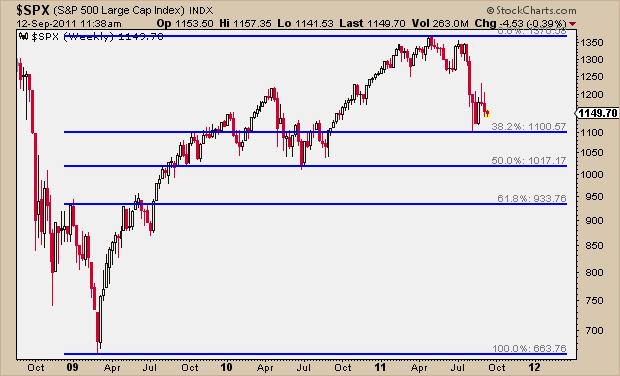