Here is my recent article for MarketWatch.com:

We are going on two years of solid underperformance out of the emerging-markets space. Since October of 2010, we have seen a steady decline in emerging markets vs. the S&P 500. But we may be in the beginning stages of a shift in money flow.

Here is a chart of the Emerging Markets ETF $EEM vs. the S&P 500 $SPY. It’s easy to spot the underperformance that we’re describing: 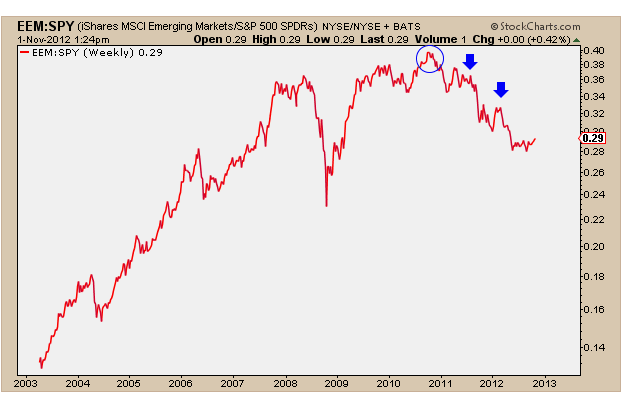 But in the shorter term, we may be seeing a reversal in fortunes for the EM space. For the last six months or so, EEM has been consolidating and base-building vs. the S&P500. Bottoms are a process and not a single event. So this type of action is consistent with our reversal thesis.

While this particular pair has done nothing for six months, it has allowed for some of these declining moving averages to flatten out and begin their reversing process. In this chart, we can see the faster, shorter-term 50-day moving average try to turn up. And the longer-term 200-day moving average, which has been declining for years, has also flattened out, which is the first step to a reversal.