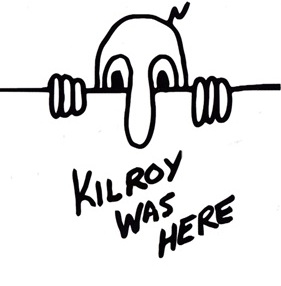 In case you hadn’t heard, an Inverse Head and Shoulders pattern has been forming in the stock market. During an uptrend, these patterns are often signs of consolidation within the major trend. The implications here, if this is indeed an Inverse H&S pattern, is the continuation of the raging bull market that we’ve been in for the last 2 years. Above I put up a picture of Kilroy, a popular character doodled on walls by American soldiers during World War II. This character has been resurrected by some technicians as a symbol for an inverse head & shoulders. Think about it, rather than a head and two shoulders, the opposite is Kilroy’s nose (as the head) and his two hands (as the shoulders).

Below we have a chart of the S&P500 showing the two shoulders and the head (nose and two hands, if you will). Until we receive confirmation, this is purely speculation. Confirmation in these cases is just as important as recognizing the pattern in the first place. The Neckline here lies at the $134 level so we would like to see consecutive closes above that before we start drawing any conclusions. 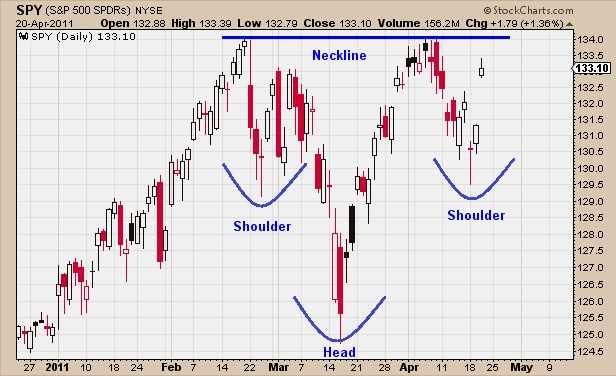 The calculations for the price targets here are very simple. We take the distance from the bottom of the Head ($125) to the Neckline ($134) which gives us $9. If we add that $9 to the top of the Neckline ($134) we get a price target of $143 for $SPY. Just because we can do second grade math does not mean that the S&P500 is going to 1430. These numbers are simply the price targets that we should keep in the back of our minds when thinking about taking profits in the future. Let’s just say that it would be a nice problem to have.