From a longer-term perspective, Coffee is in the process of retesting the breakout level in early 2014. Here are the weekly candlesticks showing prices starting out last year by breaking the downtrend line that dates back to the recovery highs late in the summer of 2011. The ultimate lows in late 2013 represent former support from the late 2008 lows just above 1. At these lows, the Commercial Hedgers had their largest long positions in history. Sentiment readings at the time were at their most pessimistic levels since August of 1999. This was a very powerful sentiment unwind that took place in the first half of last year.

Notice how the rally off the 2013 lows stopped exactly at the 61.8% Fibonacci retracement of the entire 2011-2013 decline. This level also represented support and resistance between the end of 2011 and early 2012. In the future, this will be a big level for us from a more structural perspective.

At this point, after prices broke down below support from the lows last summer, which were also the lows to start 2015, this now becomes overhead supply. This new resistance just under 1.60 also coincides with a downward sloping 200 week moving average. So for now, we want to be selling into any strength near that level. 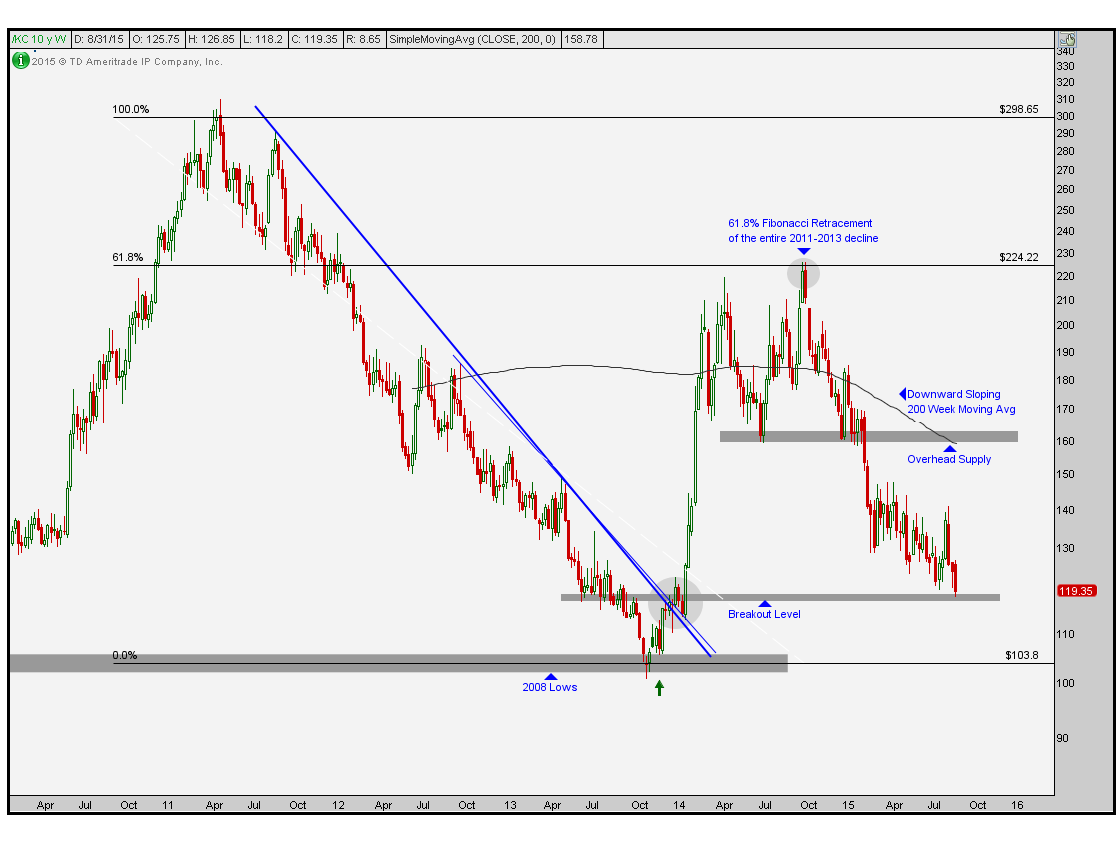 Looking shorter-term, Coffee is about to enter what is the most bullish 5-month period of the year, which starts in October and goes through February. The bullish seasonal period does not begin just yet, but the anticipation of this bullish time of the year is something that we want to keep in mind. In addition, the Commercial Hedgers currently have their largest long positions since October of 2013, just before that major rally was sparked. Meanwhile, sentiment readings are near extreme bearish levels that haven’t been seen since late 2013. We’re not quite as bearish as we were then, but there is enough pessimism to suggest that a short position here is not the best risk/reward proposition.

From a pure price perspective, Coffee is currently towards the bottom end of a downtrend channel well-defined by these two parallel trend lines since the first quarter of this year. What bothers me is the failed breakout 2 weeks ago above the upper of those two parallel trendlines as well as the downtrend line from the November 2014 highs. With a downward sloping 200 day moving average putting added downside pressure in price, this should not be all that surprising. 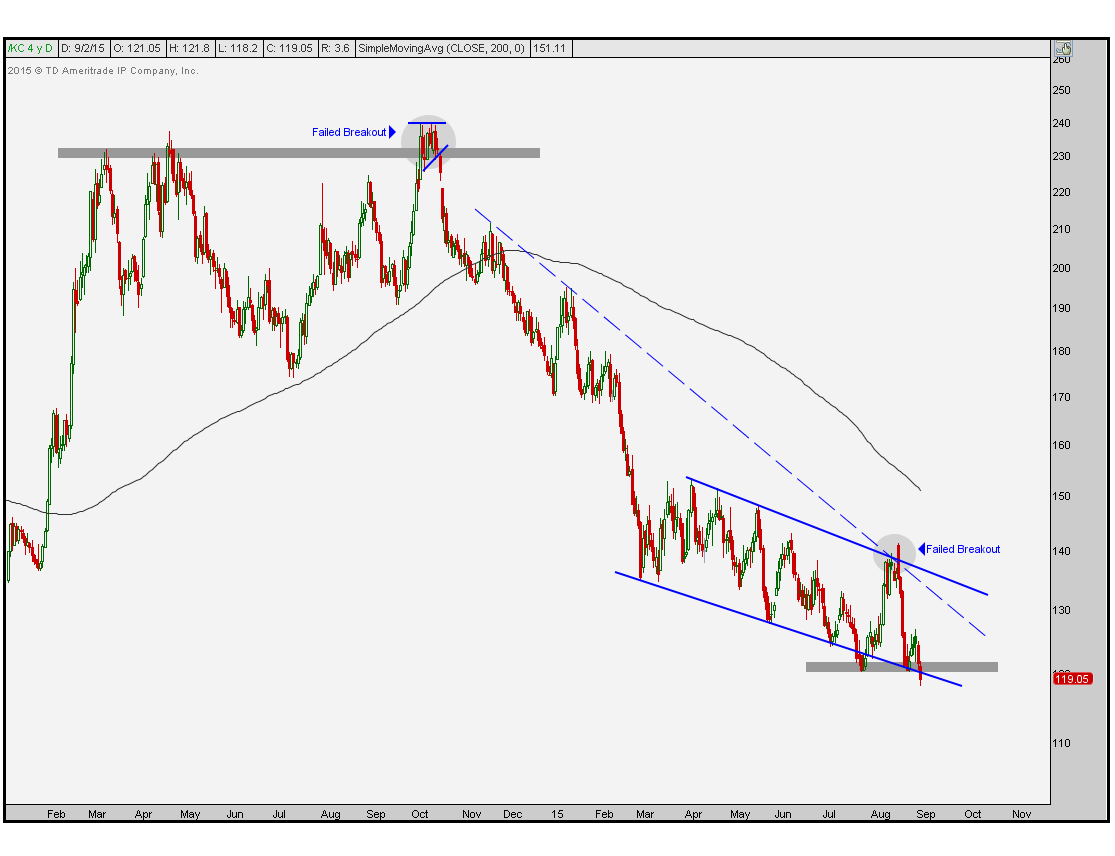 In conclusion, shorting Coffee from a structural perspective makes little sense to us as sentiment is extremely bearish down here, Commercial Hedgers are buying very aggressively, and price is near the breakout level from early 2014. The risk/reward longer-term simply does not favor the shorts and looks more bullish than anything else.

Shorter-term, from a more tactical perspective, there is enough downside momentum that suggests fading strength is the best route to take here, particularly if prices can get back up above 1.40. I believe that time is simply the best remedy right now and perhaps a base can begin to build over time to allow the downward sloping smoothing mechanisms to flatten out and begin to slope higher.

Day-to-day traders can keep an eye on the August lows just above 1.2035. If prices can get above and stay above that level, this would confirm the potential bullish momentum divergence currently setting up. The new lows in price this week, combined with a higher low in momentum could spark a mean reversion back up towards 1.40. Tactically I see no reason to be long Coffee if prices are below 1.2035 and would only be long above that as it represents prior support from last month, the lower of the two parallel downtrend lines defining this channel, and most importantly the original breakout level from early 2014.

To me, 1.2035 is the big level we want to watch as we are about to enter the most bullish seasonal period of the year, sentiment is extremely pessimistic due for an unwind, and the Commercial Hedgers are well-prepared for a rally in Coffee.

Click Here to receive updates on these charts on a weekly basis along with 16 other commodity futures contracts including Crude Oil, Gold, Silver and Corn on multiple timeframes.