If you know anything about me you know that I can’t stand when prices are near a flat 200 day simple moving average. It’s not that I want to short stocks in those situations. I don’t want anything to do with them at all. You’re signing up for a headache, I’m telling you. Breakouts tend not to hold and breakdowns usually don’t hold either. The reason is that there is no trend when prices are near a flat 200 day moving average. Markets trend by nature, but when they’re in this particular situation, they don’t. Why would you bother with the one scenario where you know markets are not trending?

I think the S&P500 is a great example of why we want to stay away when price is near a flat 200 day. Headline writers like to make a big deal when price breaks above or below this particular smoothing mechanism, but 99% of the time they fail to mention the direction in which that moving average is heading. Is it upward sloping, downward sloping or flat? This is the more important question to ask. Not that price got above an invisible line today.

On October 23rd the S&P500 managed to break above a flat 200 day moving average. After a push higher for a couple of weeks, prices then fell back below the mean losing about 100 points, and then rallied back 80 points, and now fell another 70 points or so. Are you seeing what’s happening here? Does your head hurt yet? Was it worth it to mess with it? Six weeks later the price of the S&P500 is exactly where it was when it first crossed its flat 200 day moving average. 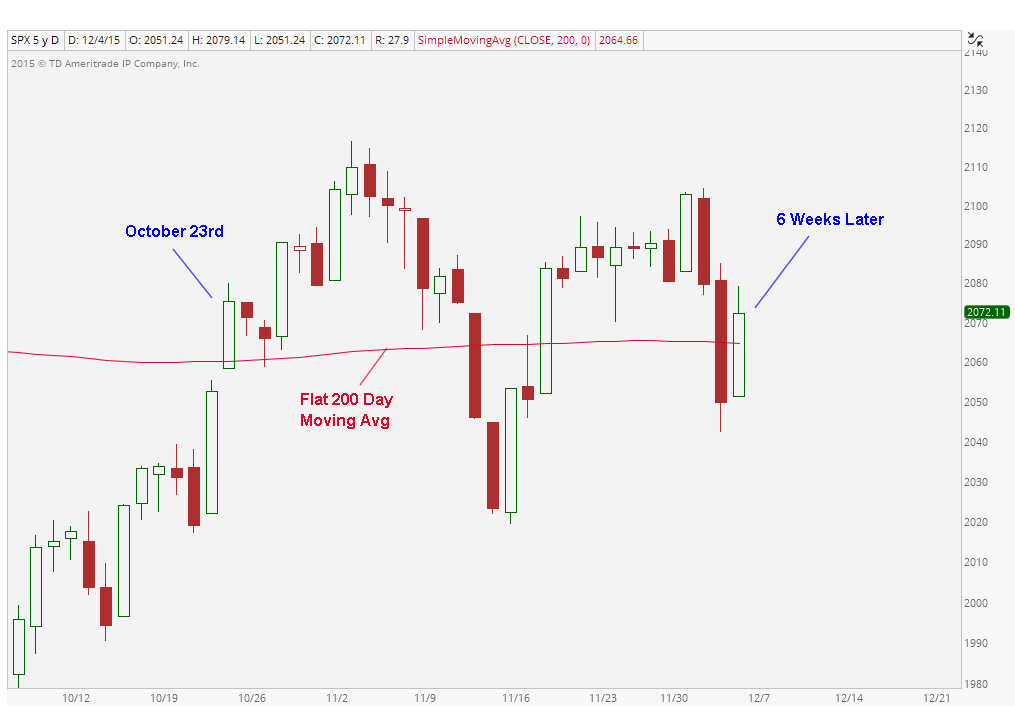 I can point out a million examples of situations like this. When markets are not trending, it’s a tough place to be from any sort of intermediate-term perspective. I look out weeks and months, so when prices are near a flat 200 day simple moving average, I want nothing to do with it. Sure, sometimes it will feel like I missed a trade. But then a day or two later you see a frustrating reversal and that’s the aha moment. At that point you say to yourself, “See that’s why I didn’t buy that breakout”.

I’ve mentioned this before and long time customers of our research know this all too well. But I thought since the S&P500 has provided us with such a beautiful example over the past 6 weeks, it was worth bringing up one more time.

The idea behind pointing this out is not to say “I told you so”, or to pat anyone on the back. The reason I want to bring this up is to try and add value to your process. I’ve learned this lesson the hard way over many years of ignoring such a simple signal. My frustrations are what have led me to put so much emphasis on why we want to stay away from this junk. I hope it helps.

Note: I’m working on something new where we are sending out a weekly letter about the markets. You can see a recent example here: Dec 3, 2015