We’ve been hearing a lot about this 200 day moving average recently since the S&P500 is currently right around it. You read about it in publications, you hear about it on the TV and you see it mentioned often from the twitterati. But what does it actually mean? This is the big question. And there is really no right answer. It just depends on who you are and what your objectives are. Today I wanted to share with you guys why it is that I look at it and how I use it personally.

First of all, let’s define what it is. The 200 period moving average is an unweighted mean of the prior 200 periods. The market is fractal, which means that supply and demand behaves in a similar fashion regardless of time frame. If we are looking at a daily chart, it refers to the last 200 days, if it is a weekly chart it refers to the last 200 weeks, 10-minute chart, the last 200 10-minute periods, etc. This simply takes the average closing price of the prior 200 periods. After each new period’s close, the data from 200 periods ago gets removed from the calculation and the most recent period’s data is added. Hence the term “moving” average.

The financial media likes to reference this particular smoothing mechanism because it’s popular among market participants, for whatever the reason. I often hear about how the S&P500 is “now below it”, or “now above it”, like if this point on its own means anything at all. It may or it may not, but I have never seen any evidence to suggest that this particular event is either bullish or bearish. Like many things we hear in the media, data points are often exaggerated and misused. But remember the media is not here to help you make money, they are there to sell commercials and advertisements. So they will try and reference whatever will attract the most viewership or website clicks. And there is nothing wrong with that if that’s their business model. It’s just important for us to recognize who is saying what and why. We are all here for different reasons. As market participants we don’t care about what’s sexy, we just want to make money and manage risk. Nothing else really matters to us (while we’re at work anyway).

As far as I’m concerned, I like to use the 200-period moving average mostly for trend recognition. I worry less about where the average is and try and focus more on the slope of the smoothing mechanism. If prices are above an upward sloping 200 day, in all likelihood we are in an uptrend. If prices are below a declining 200 day, we’re likely in a downtrend. And if we have a flat 200 day, there is likely no trend. Whenever there isn’t a trend, that particular market is difficult to trade and is usually filled with whipsaws that frustrate both the bulls and the bears. So for me, it’s important to recognize a lack of trend and avoid the headaches that will likely come from trading in that particular market.

We generally like to trade in the direction of the underlying trend. In other words, we would rather be swimming with the tide, not against it. However, this moving average provides us with a lot of insight in some cases when it comes to mean reversion. For example, if prices are substantially above a downward sloping 200-period moving average, the chances of a mean reversion coming soon are high. Failed breakouts are common place in this sort of environment. The same can be said when prices are substantially below an upward sloping 200 period moving average. In these cases, failed breakdowns and quick rallies higher can be found all the time.

A good example recently is in the Solar stocks. Take a look at a weekly chart of $TAN – the Solar ETF. This was a nice and clean symmetrical triangle that failed after breaking out to the upside. The downward-sloping 200-week moving average would have warned you that this breakout was unlikely to hold. A swift sell-off was the result of all the downside selling pressure that you will find in a typical downtrend, which this 200-week moving average defines for us nicely: 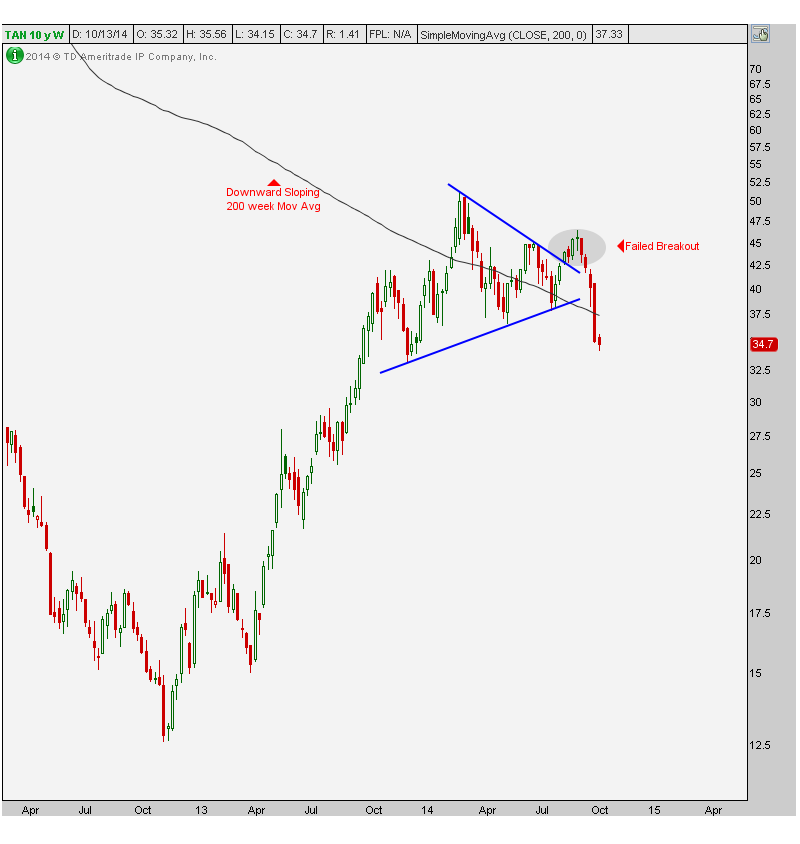 The S&P500 over the last few years has been a good example of the media getting all excited about the 200 day moving average, but failing to notify investors/traders of it’s direction. Feel free to go back and read the headlines from those days. But both of these “breaks” of the 200-day moving average were nothing but buying opportunities. The upward slope of the moving average would have helped you define that we were still in an uptrend. So initiating short positions upon a break was probably not the best idea: 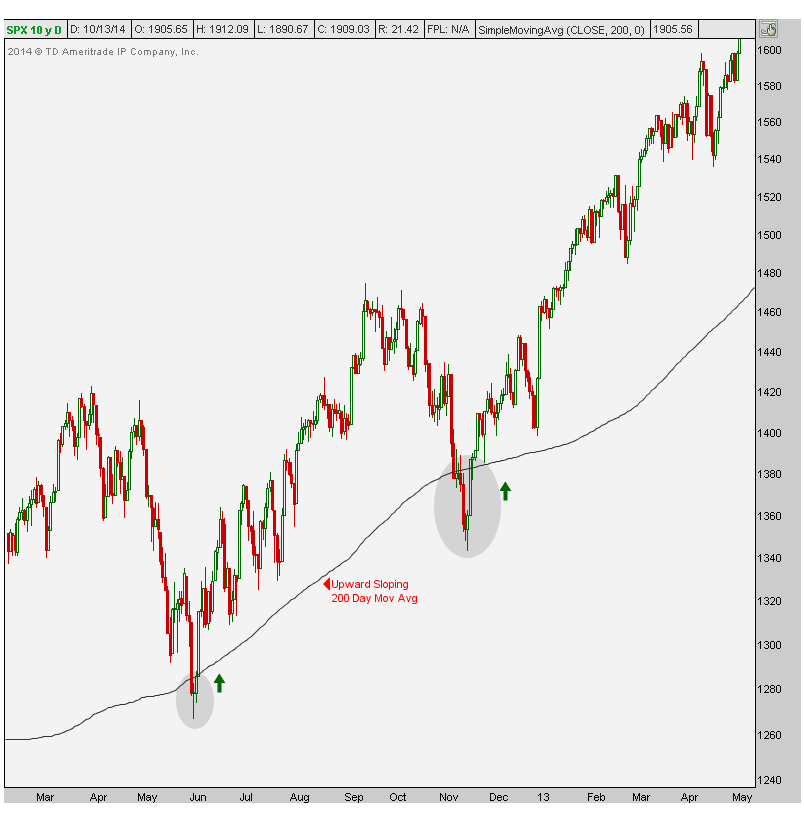 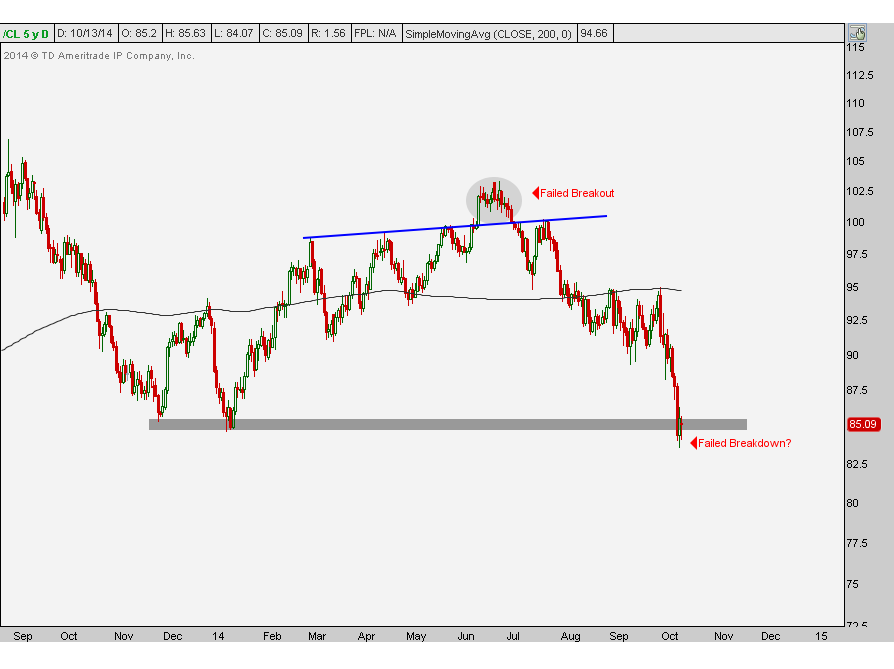 Today we can see that the Russell2000 is now trading below a downward sloping 200 day moving average. This combined with the fact that prices are hitting new 52-week lows tells me that this market is not in an uptrend. Sure we will certainly get counter-trend rallies in this market, nothing goes straight down. But the trend here is not up. So a down to sideways market is likely here to stay. So is this somewhere that we want to be trading on the long side, other than for a mean reversion. Probably not. Breakouts are likely to fail and selling pressure is the dominant theme here: 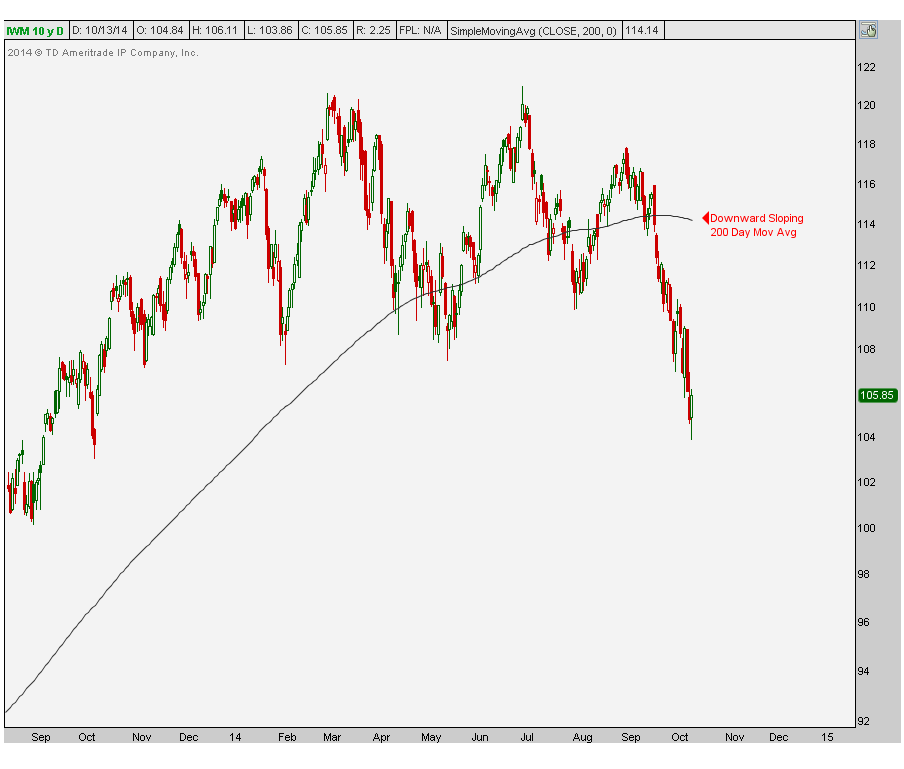 So that’s how I use the 200-period moving average. I hope this gives you some insight as to how I approach the market. There is no right or wrong way to approach any of our technical tools. At the end of the day it all comes down to disciplined risk management. I just think that defining the direction of the underlying trend helps big time with that. So it’s not so much where price is relative to the 200 day, but the slope of the smoothing mechanism that matters most to me.