The leadership rotation continues in earnest. From a sector perspective, Technology dropped four spots last week and is on the cusp of falling out of the leadership group for the first time since 2019. Consumer Discretionary dropped another two spots and except for Utilities, would be in the last place in the rankings. Gaining strength this week are Communication Services and Materials. Beyond all the improving and deteriorating conditions seen at the industry group level across market cap levels, our rankings show a consistent theme: 8 of the top 10 groups (and none of the bottom 10) are small-caps and 8 of the bottom 10 groups (and none of the top 10) are large-caps.

END_OF_DOCUMENT_TOKEN_TO_BE_REPLACED

From the desk of Steve Strazza

Don’t miss this weeks Momentum Report; our weekly summation of all the major indexes at a Macro, International, Sector and Industry Group level. As a reminder, we analyze this shorter-term data within the context of the structural trends at play.

END_OF_DOCUMENT_TOKEN_TO_BE_REPLACED

The monthly jobs report always gets a lot of attention. Headlines usually focus on the number of jobs added (or lost) in the month and the unemployment rate. Occasionally, the hourly earnings number will be quoted and even more rarely there will be a mention of average weekly hours worked. While the noise focuses on the payroll number (+379,000 in February), more important news is that this accompanied a contraction in the average weekly hours number. The combination of these is the aggregate weekly hours index, which fell in February to its lowest level since September and remains more than 6% below its peak. If the US economy is on a sustainable road to recovery, this index should start to move meaningfully higher in the months ahead. It’s something I’ll continue to be watching. 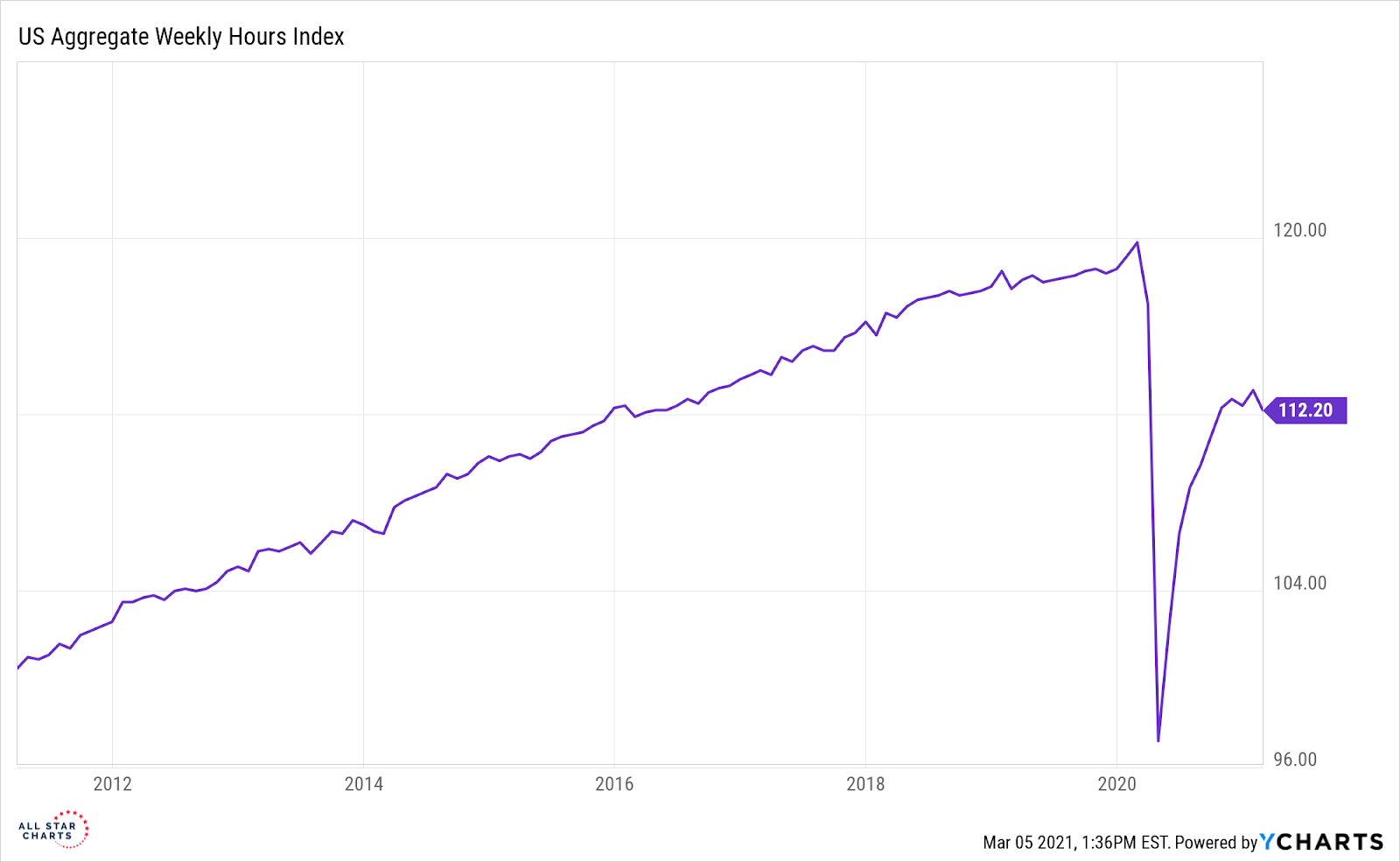 END_OF_DOCUMENT_TOKEN_TO_BE_REPLACED

From the desk of Steve Strazza.

Our Top 10 report was just published; our weekly report highlighting the best 10 ideas and respective charts we are seeing across the markets this week.

1. No More Divergences For The Dow

There had been a classic “Dow Theory” divergence in place for several years, dating back to when the Dow Transportation Average peaked in 2018. This cleared itself up late last year when Transports actually beat Dow Industrials back to new all-time highs. They’ve continued to lead in the time since. What really matters though is that both continue to grind higher, confirming one anothers new highs along the way. We often talk about Modern or 21st Century “Dow Theory,” which uses the Semiconductor Index in place of Transports. This is because a strong argument can be made that semis are the new drivers of what is now a mainly services-based economy in the US (and abroad). While Transports continue to trade more or less at record highs, Semiconductors haven’t made a new high in over two weeks now. With money rotating out of Growth and Tech, this is something we’re keeping a close eye on. While a change in leadership is just fine, and actually something we’re anticipating, we still want to see these stocks participate on an absolute basis as they are imperative to the world economy. 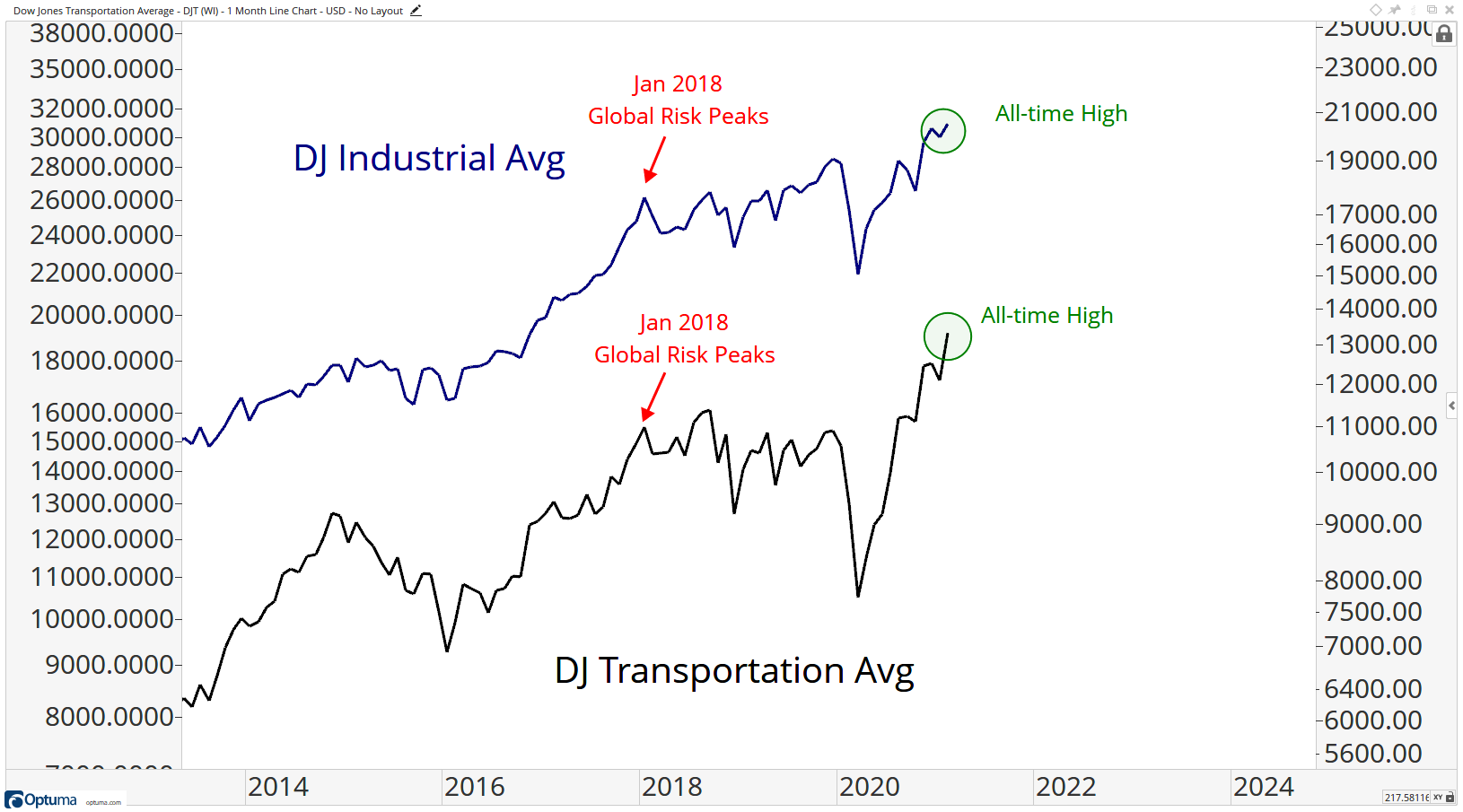 END_OF_DOCUMENT_TOKEN_TO_BE_REPLACED

Key takeaway: Another bout of late-month market volatility produced quickly frayed nerves. The VIX spiked and put/call ratios moved away from excessive complacency. Our tactical sentiment indicators point to still-elevated optimism even as sentiment surveys have eased recently. Risks arise when breadth deteriorates and a sustained shift from optimism to pessimism emerges. We are not seeing this yet. The $78 billion of equity ETF inflows in February (over the past two months equity ETFs have seen daily net outflows on only 3 occasions) suggests excessive investor positioning, but the risks inherent in that have not yet been manifested. Despite last week’s volatility, cyclical sector leadership persisted and defensive areas made new lows. That does not suggest investors are moving quickly to a risk-off posture. 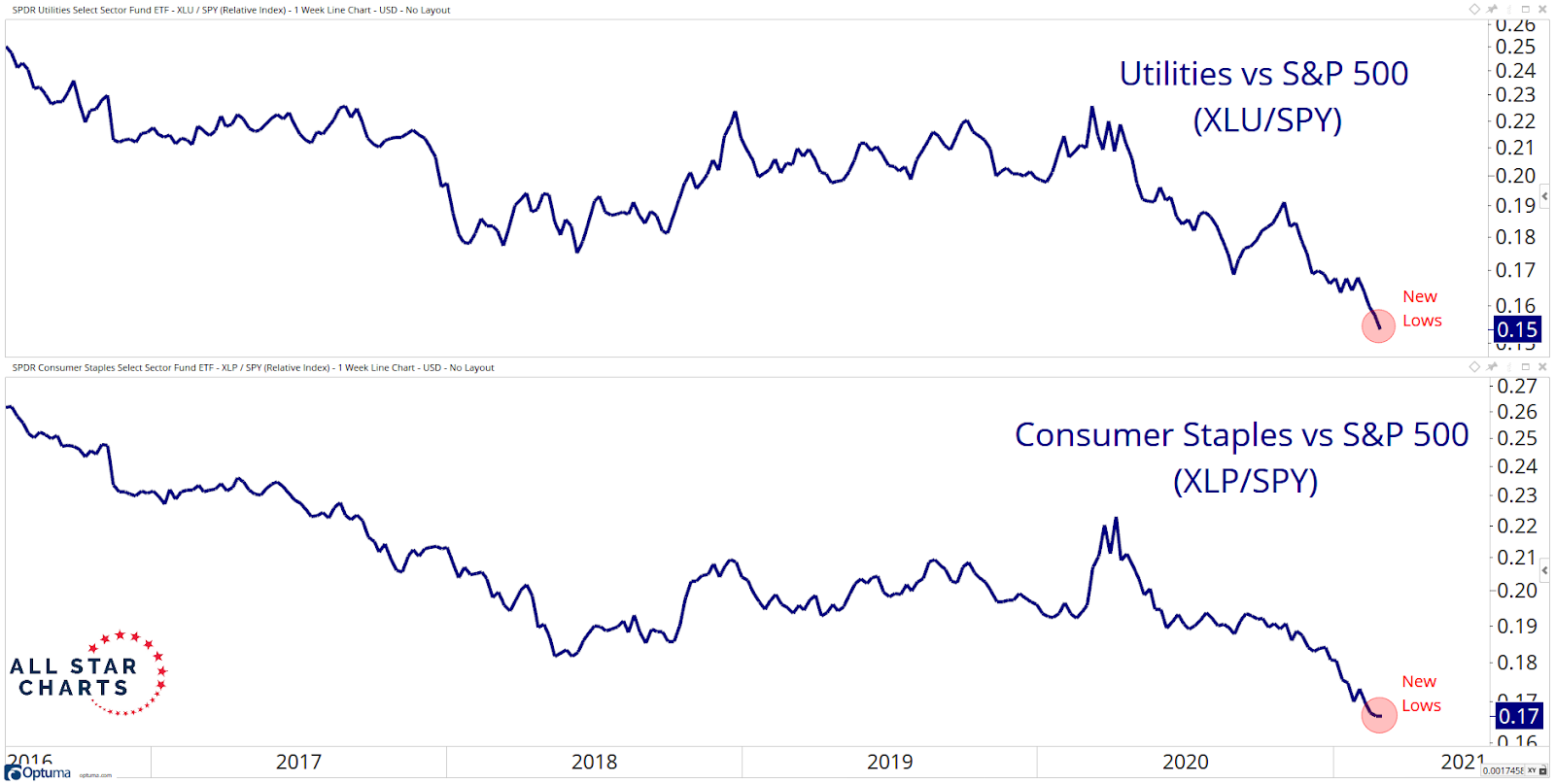 Two of the most defensive sectors, Utilities and Staples, made new lows relative to the broader market last week. These ratios depict a risk-on environment that supports higher prices in stocks.

END_OF_DOCUMENT_TOKEN_TO_BE_REPLACED

This All Star Charts PLUS Monthly Playbook breaks down the investment universe into a series of largely binary decisions and tactical calls. Paired with our Weight of the Evidence Dashboard, this piece is designed to help active asset allocators follow trends, pursue opportunities, and manage risk.