It is very difficult, if not impossible, to put all social media stocks into one category. We do our best with ETFs like $SOCL, but they can be heavily skewed by certain stocks and it ignores others with smaller market caps. Also, what does a company LinkedIn have to do with Yelp or Yahoo? I think we need to be careful grouping them into just one category, and keep in mind that they are all individuals with their own problems as well as their own unique positive qualities.

The reason I bring this up is because yesterday afternoon, Michael Santoli tweeted out a mystery chart asking followers whether it was a buy or sell:

Mystery chart (it’s a relative chart of two stocks). Buy it or sell it? pic.twitter.com/4aEKOsejfp

At first glance, my initial reaction was to sell it aggressively. Although it was an exaggerated response (we’re not actually going to put an entire portfolio into one trade) it appeared like an easy fade against the previous highs:

Shortly thereafter, he revealed that it was a ratio chart of Facebook vs Twitter. I quickly went to my own chartbook, where I already had this specific pair plotted with my favorite momentum oscillator, RSI, the Relative Strength Index. Twitter is a stock that we’ve wanted to be buying as long as it is above the January lows. This has not changed and is certainly still in play. But with an equivalent Facebook short against it, it provides a more neutral, less correlated trade, for what I would consider to be a better-diversified portfolio.

Here is the same chart that Santoli tweeted out, but flipped upside down. Instead, we are looking at Twitter as the numerator and Facebook as the denominator. My initial reaction was to fade Santoli’s chart, which would be equivalent to buying this one: 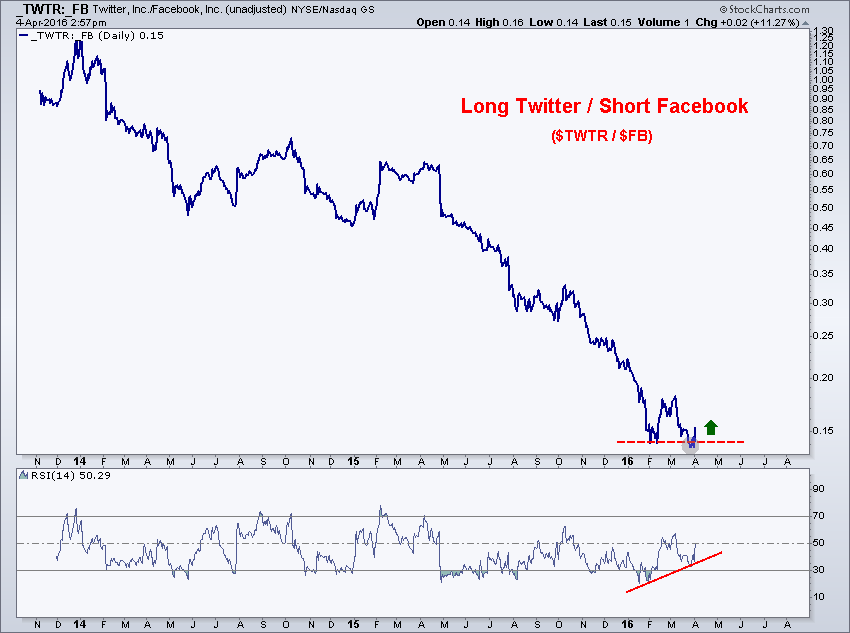 The way I see it, the ratio put in new lows late last month below the previous lows from early February. As prices of the ratio made new lows, momentum put in a higher low. In fact, it put in a MUCH higher low, failing to even reach oversold conditions (below 30). To start April, this ratio is now back above those former lows. I think the bullish momentum divergence and failed breakdown last month can be the catalyst to send this ratio much higher, very quickly.

I think the trade here is simple. We only want to be long this chart if it is above the early February lows. This makes the risk extremely well-defined, which is what we care most about. The upside can easily be a double, which creates a profit potential that, to me, more than justifies the risk being taken.

Execution-wise, for every dollar we’re long of Twitter $TWTR, we want to be short one dollar worth of Facebook $FB. This creates a market neutral position for a portfolio that has little or no correlation whatsoever to the S&P500, federal reserve or Donald Trump. We like that.

No one is talking about this pair. Big ups to Santoli for pointing this out yesterday.

Premium Members of All Star Charts will receive timely updates on this chart, including over 350 others, weekly letters and a monthly conference call.