One thing unique about the market is that the game is never over. There aren’t four 15-min quarters or two 20-min halves like in sports.

In those endeavors there is a beginning and an end.

You know who won (or who tied in some cases). But the match is over, and there will be another one in a few days or a few months, depending on the sport.

In the market, it never ends. This can cause issues psychologically, so it’s something we should all be aware of and keep in mind.

But if you ask me, currently the bulls are scoring a lot more points. This is the first time we’ve seen that since Q1 this year, when the bears started running up the score.

Look at the S&P500 break out to new all-time highs relative to US Treasury Bonds. 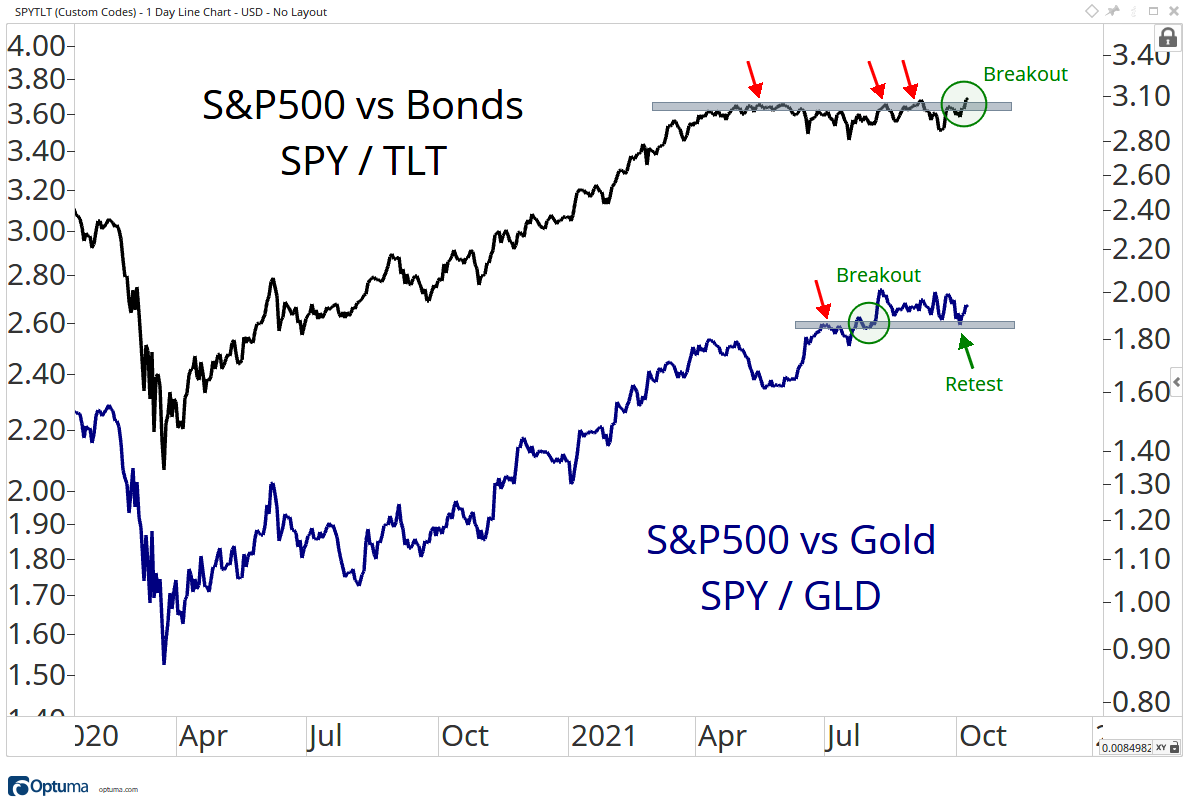 Stocks broke out relative to Gold back in August. So it looks like this could be a successful retest of that breakout.

This matters because in strong bull markets, stocks don’t just go up in price, but they also tend to outperform their alternatives. These two above exemplify that.

Look at Energy stocks going out at the highest levels since Pre-COVID and, more importantly, back above those 2016 lows: 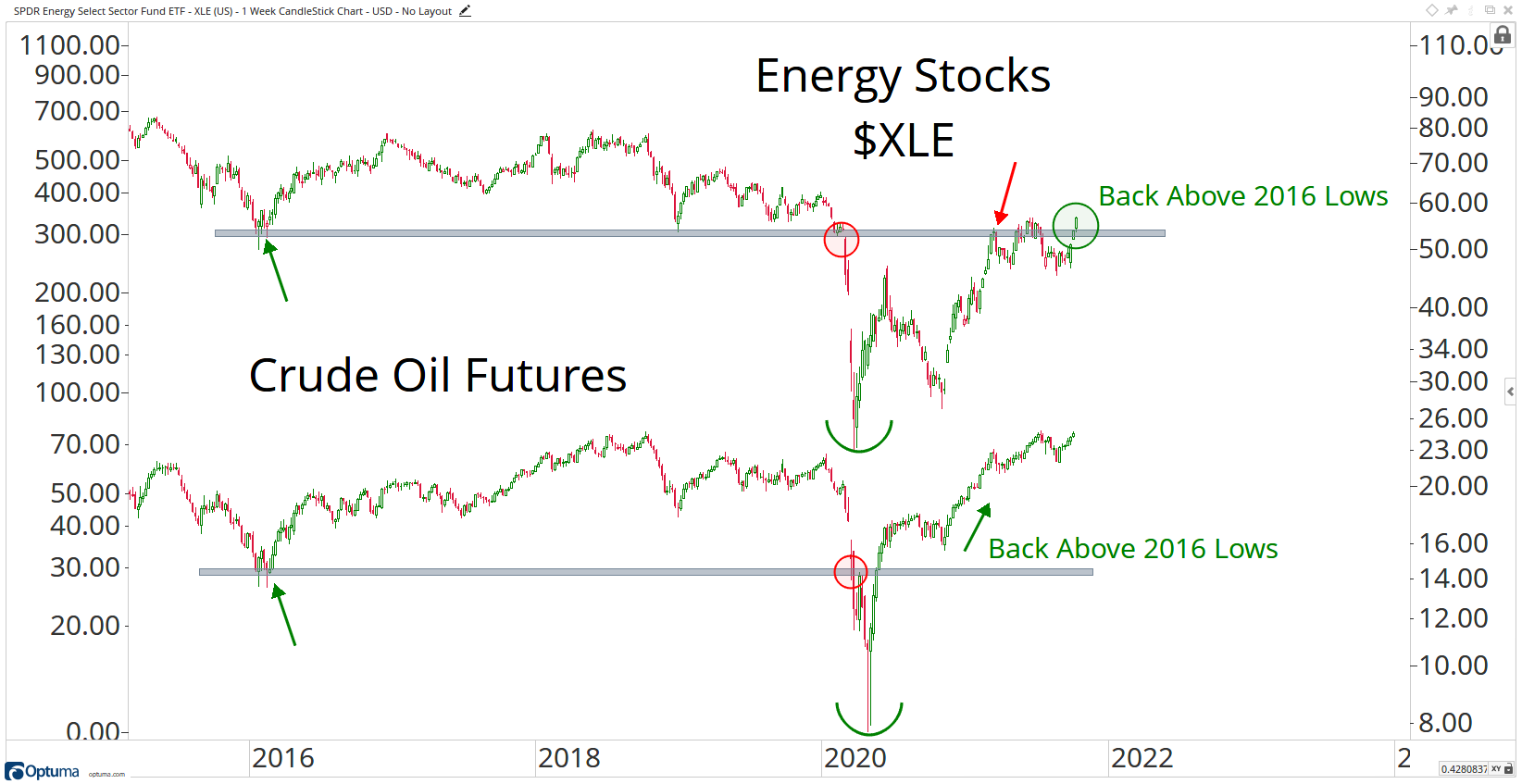 This is all happening while Crude Oil is hitting new 6-year highs.

Interest rates are clearly breaking out for a reason, and it’s the Regional Banks that are benefiting the most: 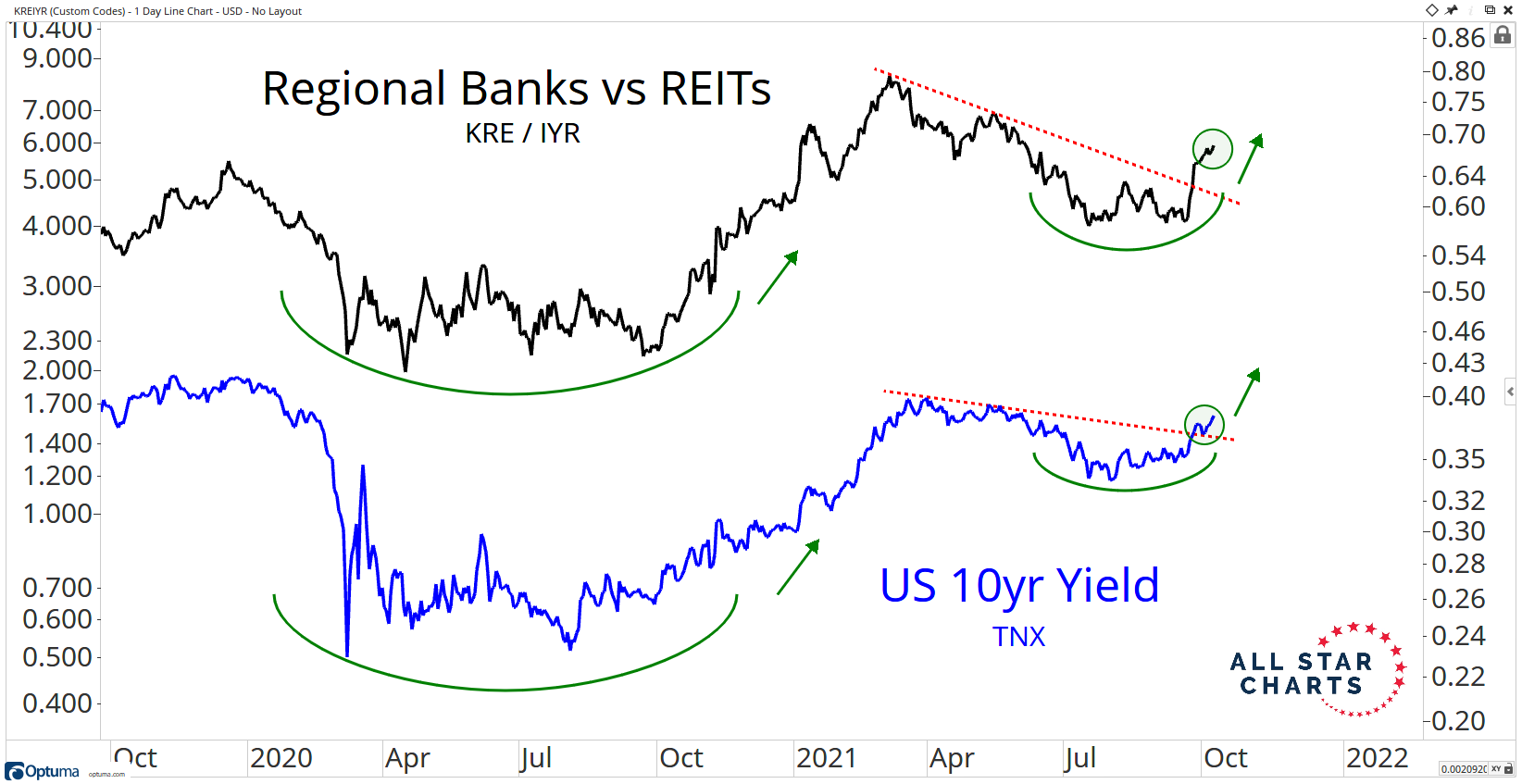 With higher rates, there’s less reason for fixed income investors to need REITs to get their yield. So the ratio between Regional Banks & REITs looks just like the US 10-year yield.

If $KRE is above those 2018 highs, how do we not own banks? I think you’d have to hate making money not to. 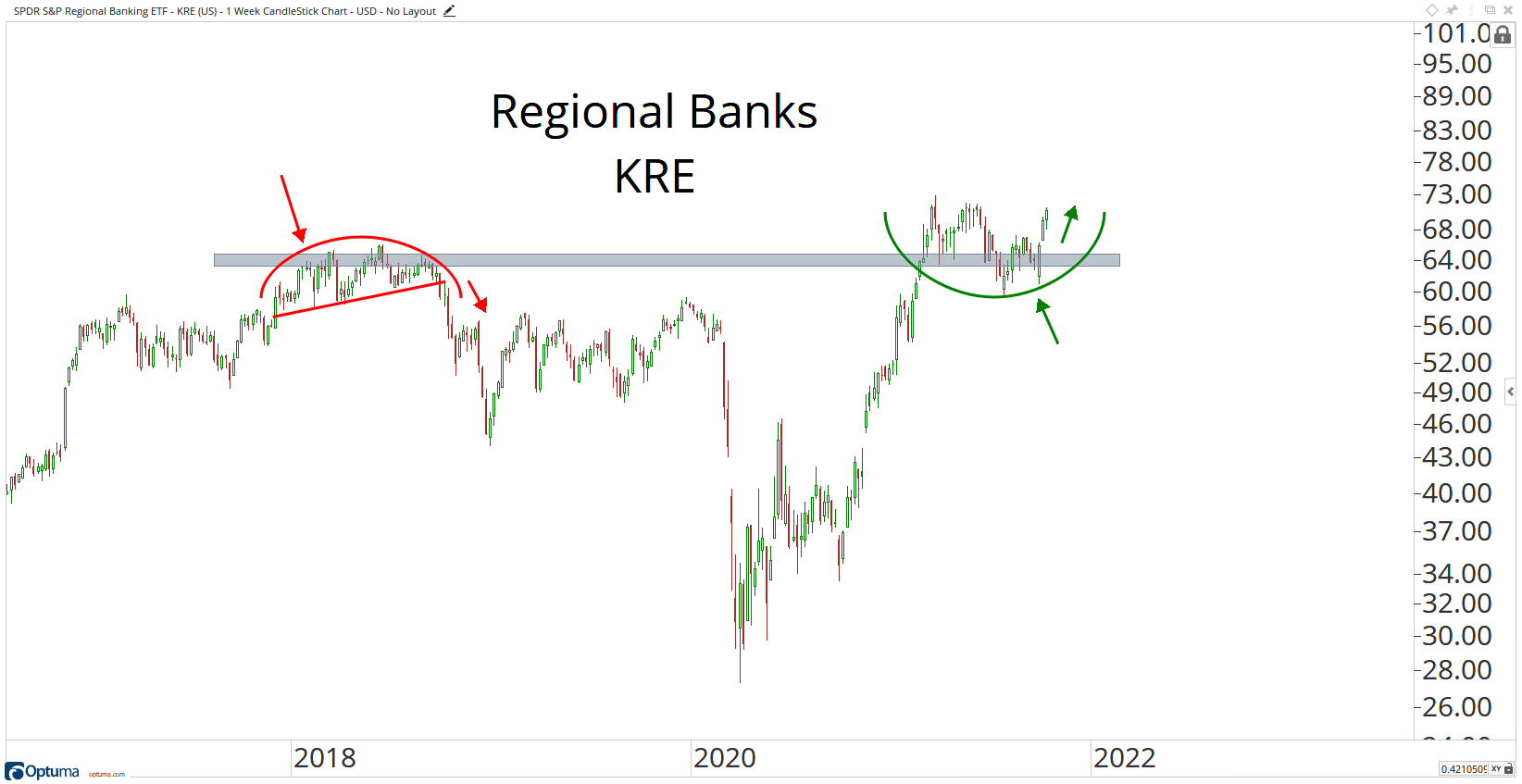 We talked about all this on the show with Josh and Michael Thursday. That was fun. Check it out here.

And while we’re counting all these points the bulls are putting up, take a look at Aussie/Yen and US Small-caps.

These were both consolidating within ongoing uptrends in classic continuation patters, that failed. 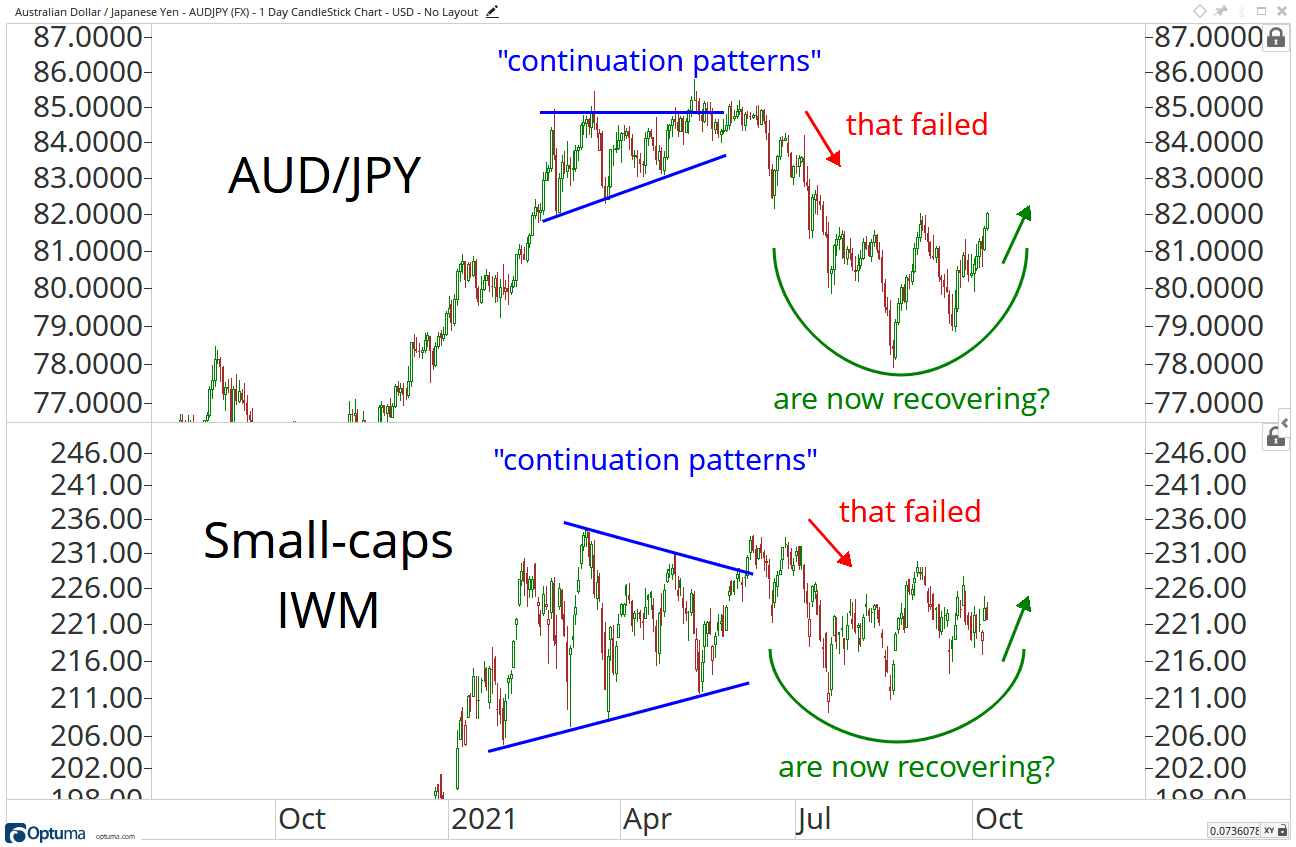 And now it looks like they’re recovering and worth keeping an eye on.

Those were the alley-oop. Next the bulls need to slam dunk this market, and I think the US Dollar could do it: 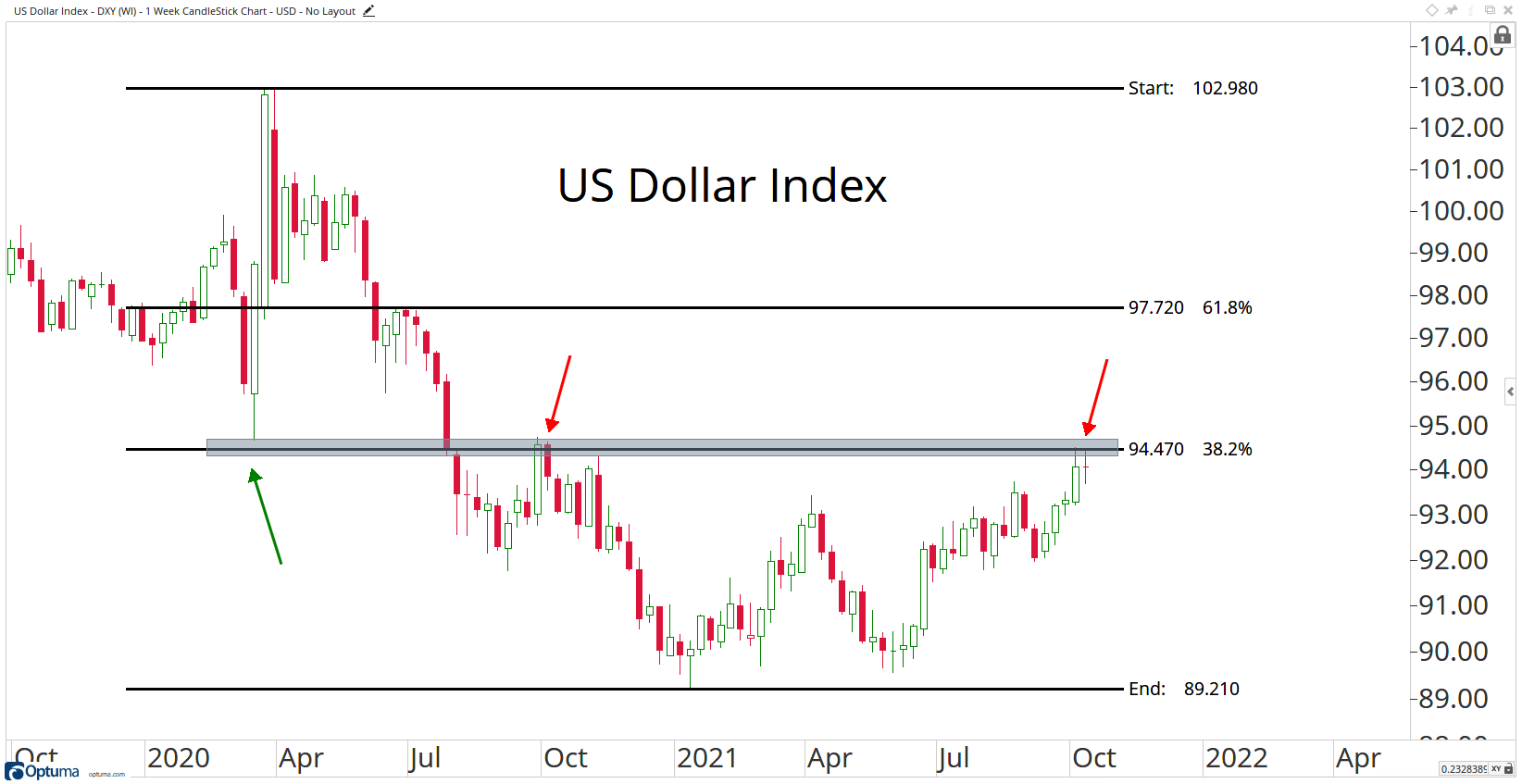 We’ve seen all this strength in Energy DESPITE a strong dollar. I think that’s important to recognize.

But if stocks are really going to get going, especially around the world, my suspicion is a falling dollar can help.

So to flip it around, if you start to see the US Dollar Index holding above 95, this whole new “Cyclical Bull Market that just started”, would likely be in question.

And I don’t want to be that US Dollar overthinker. But it couldn’t fit more perfectly into the global landscape right now.

We’ll have to see. Only price pays.

Besides, there is still no bid for defensive assets. The areas that tend to outperform when stocks are, or about to be, under pressure are the things no one wants 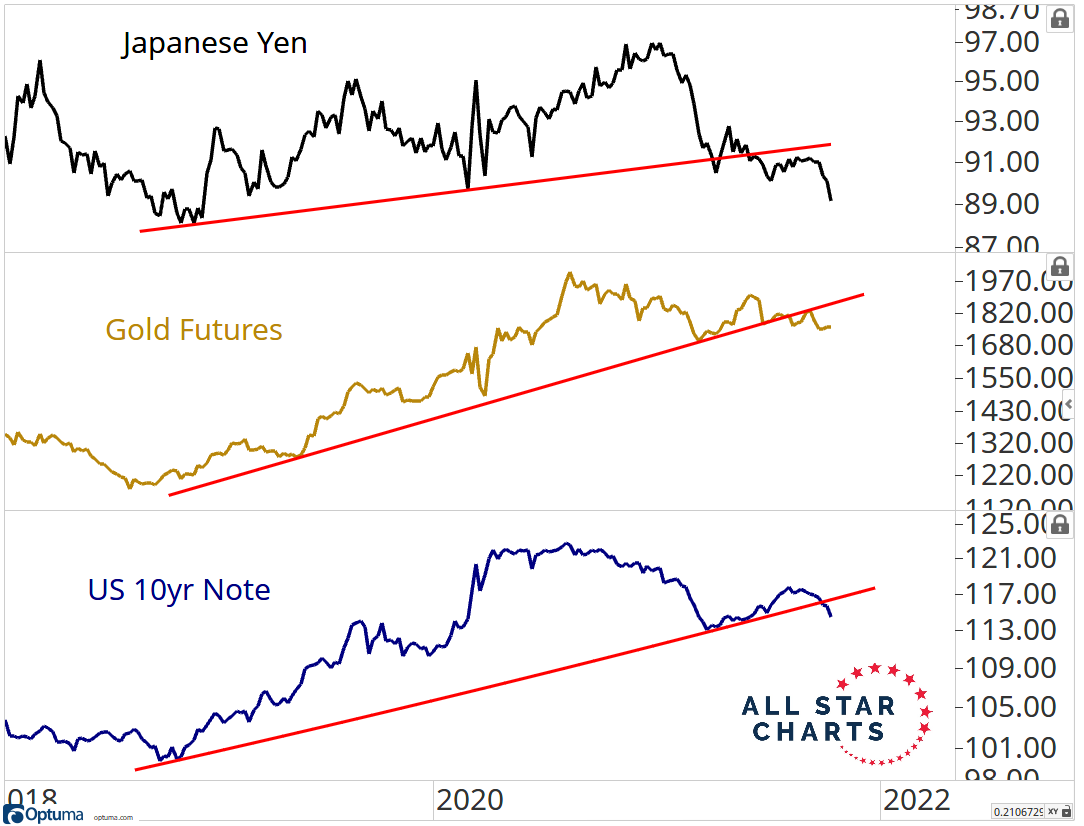 So we’re going to keep buying the stocks that are working. Not the ones we “hope” start to work, but specifically the things people have proven they want.

Here is our Hall of Famers Report that focuses on the largest stocks in the world. This week we focus on just the US names. Next week we’ll highlight the ADRs.

First we create the list, sort by proximity to new highs, and then go one by one looking for the best opportunities: 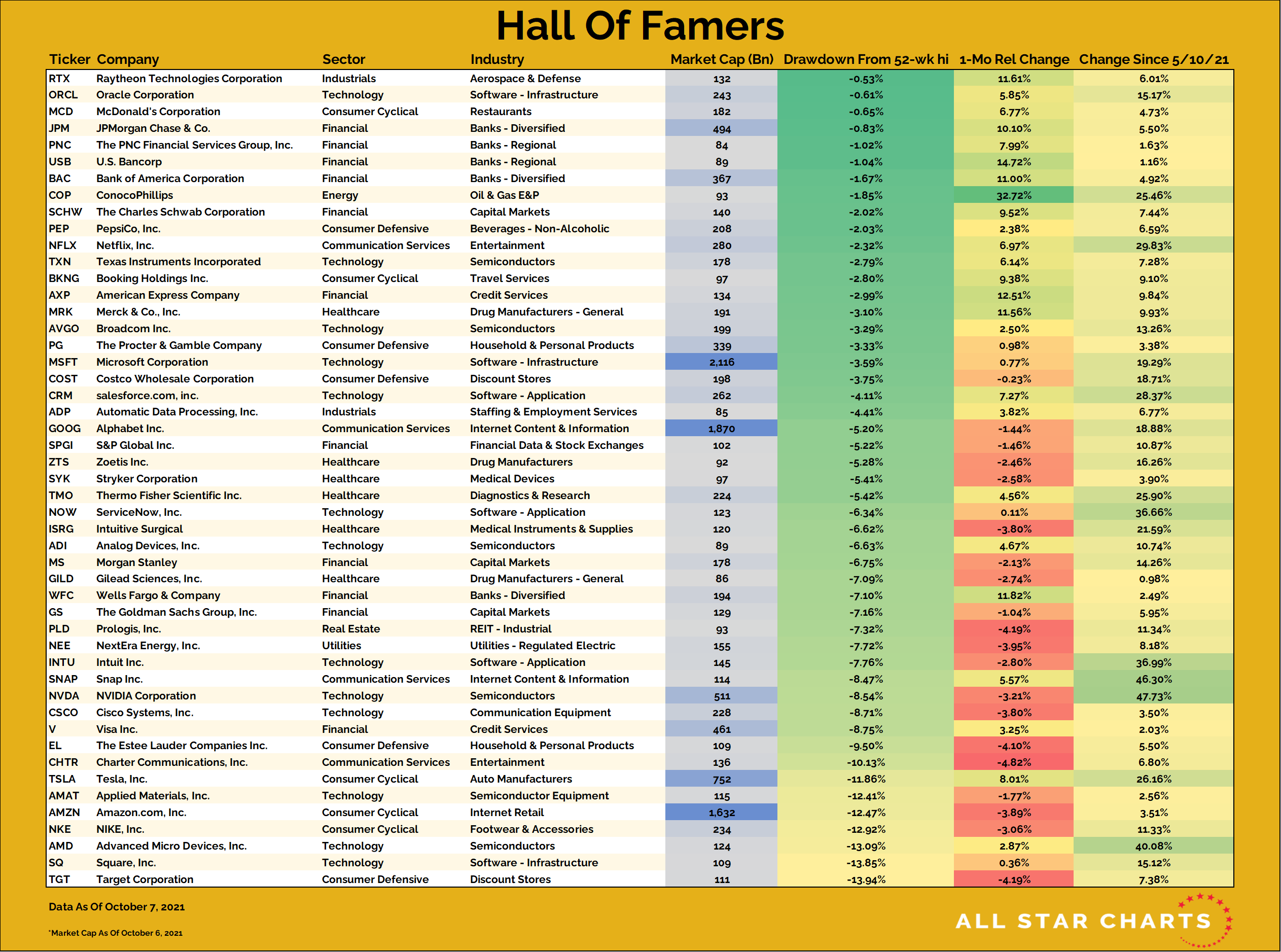 You’ll notice a lot of financials on this list. But that’s only because Energy stocks aren’t big enough to make the cut 😉

There are plenty of Energy names on some of our other scans that include smaller-cap stocks.

One of the Financials on this list has historically been a relative strength leader in the sector: Charles Schwab $SCHW

If the 4th quarter = Higher Rates + Higher Stocks + Higher Financials, I think this one is going to have a hard time not going up in price.

This is a good example of our Top/Down approach. We start with the bigger more macro picture, and then work our way down to a specific stock that fits within that framework.

You can find the rest of the U.S. Hall of Famers and trades here.

Also this week’s Saturday Morning Chartoons were up this AM. Love those!