One of my favorite ways to question my own opinions is to flip through my chart book without looking at the labels or ticker symbols. I’ve gotten much better at that over the years. Earlier this week I came across a weekly chart of 10-year Treasury Note Futures that looked to me like a bearish continuation pattern likely to break to the downside. “But I’m bullish bonds!”, I said to myself. “This doesn’t make any sense!…or does it?”

Here is the chart that I’m referring to. Wednesday I posted it on the blog as a mystery chart to see what you guys thought. I’ve been really bullish on Treasury bonds all year long and it’s worked out great obviously. The sentiment unwind we’ve see has been epic as the bond bears have been squeezed out of the market. I love it when that happens. 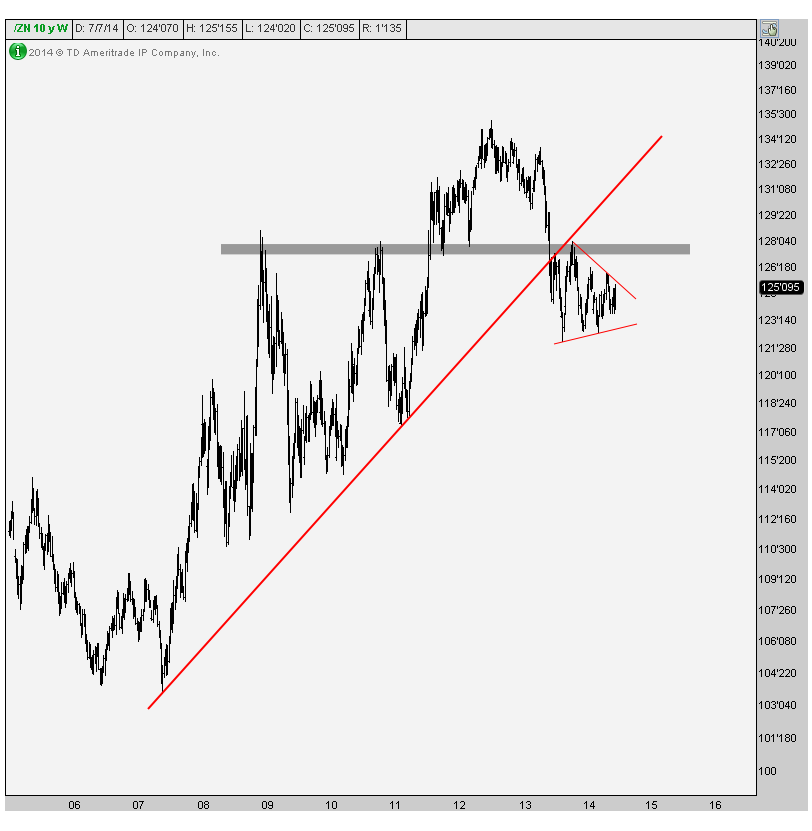 The majority of comments and tweets about the mystery chart were fairly bullish. That’s because the mystery chart was upside down. I find this exercise to be extremely valuable, especially from a risk management perspective. I constantly try to question myself, especially in my higher conviction positions, which bonds have clearly been throughout most of 2014.

Forgetting everything I think, this looks to me like a nice little symmetrical triangle below broken support. The likelihood here is that the bigger trend continues lower. But looking at other bond metrics, interest rates, yield curves, sentiment, seasonality and other intermarket relationships, I have to lean on the weight-of-the-evidence which still suggests higher bond prices and lower interest rates.

This chart, however, keeps me on my toes and helps me avoid complacency. I constantly try to question my convictions, because the data is always changing. The market is forever evolving. I try to approach it like a living thing, something that is always in motion. When the data changes, I’m happy to change my mind. But as far as treasury bonds go, despite the chart above, I have to stick with the bulls. At least for now….

REGISTER HERE for more information on how to access all of these bond and interest rate charts annotated with commentary on a weekly basis.

Today I want to take a look at what the US 10-year Treasury Note futures are doing. There was a bond auction on Thursday that brought some intraday volatility to the bond market. But has anything changed? I personally don’t think so. I believe this chart tells the real story.

We’re looking at a 1 year daily candlestick chart for $ZN_F  to represent the benchmark 10yr note. Look at the series of higher lows since last summer with clear overhead supply just above the 125 level. I really love it when we have a flat top like this: 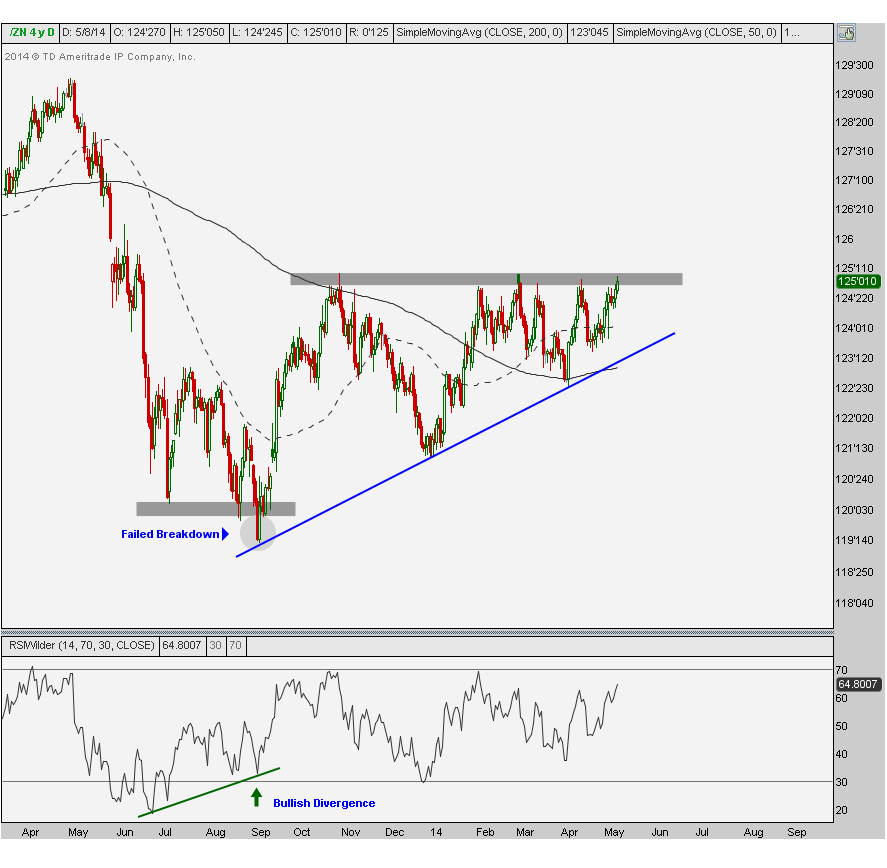 Also noticed what originally sparked this rally: it was a failed breakdown in early September combined with a bullish divergence in momentum. Isn’t that nice?

The more times that a level is tested, the higher the likelihood that it breaks. We’re now going on 6 attempts to break through this resistance. When you have prices above their 50 and 200 day simple moving averages, with a beautiful uptrend line like this, it almost seems inevitable that a breakout is coming.

This isn’t the best news for interest rates. Looks like they are heading a lot lower if/when we do get this breakout in bonds.

REGISTER HERE for more information on how to access updates on these bond charts on a weekly basis.

Last week I posted a chart without any labels on it so that we can focus on price, and ignore any biases we may have had. I received a lot of great feedback and commentary that mostly revolved around buying this particular chart as long as it remained above those 2007 lows.

As you can see here, this was actually a ratio chart with US Treasury Bonds as the numerator and S&P500 as  the denominator: 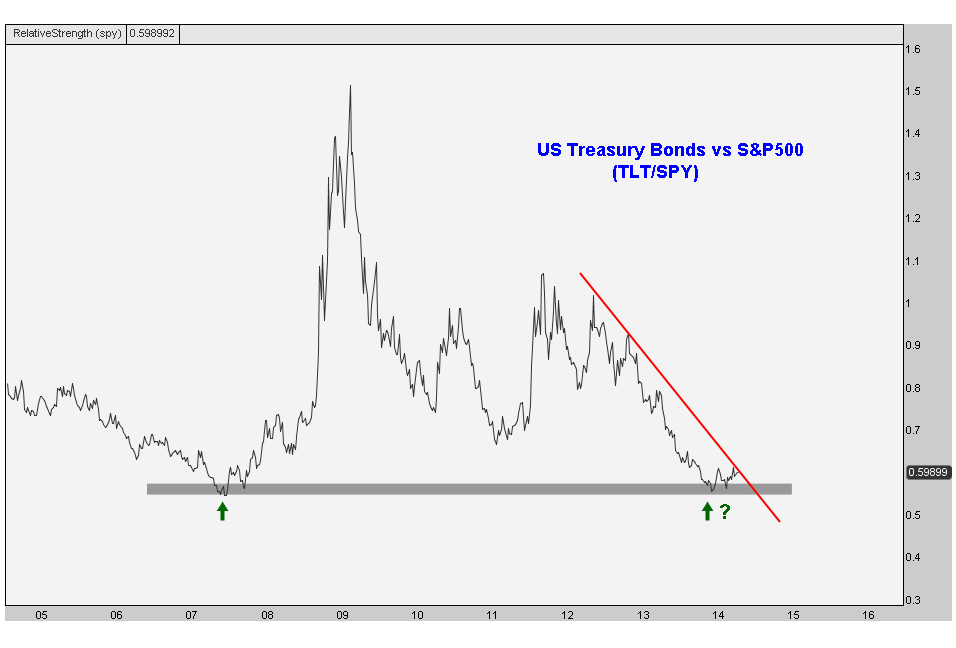 It looks to me like this is still a good risk/reward that favors bonds over stocks. Further confirmation would come after a breakout above this red downtrend line. So far this has been a great year for bonds, but not so much for stocks. I think this trend persists as the extreme bearish sentiment from late last year continues its epic unwind.

I really find value in flipping charts upside down, eliminating labels, and figuring out ways to make both bullish and bearish arguments for various positions we have on or are looking to put on. If you’re only taking one side on a consistent basis, I think you’re only lying to yourself. It’s about keeping an open mind and not taking what you think too seriously.

The market is going to do whatever it wants no matter how much homework you’ve done or think that you’ve done. So I think it’s in our best interest to always question what we’re thinking or doing. As the data changes, making adjustments to our outlook is something that we pride ourselves on. But so far in 2014, the price action just continues to confirm what we believed coming into the year. As soon as something is different, we’ll adjust.

REGISTER HERE for more information on how to access these ratio charts across asset classes on a weekly basis.

Earlier today I was down at the NYSE chatting with Jessica Menton from International Business Times. I sound like a broken record these days. I still like bonds, I still like commodities and the sector rotation continues to suggest that a more neutral or bearish stance is most appropriate right now for the US Stock Market.


REGISTER HERE for more information on how to access these Energy charts along with the rest of the US Sectors on a weekly basis. 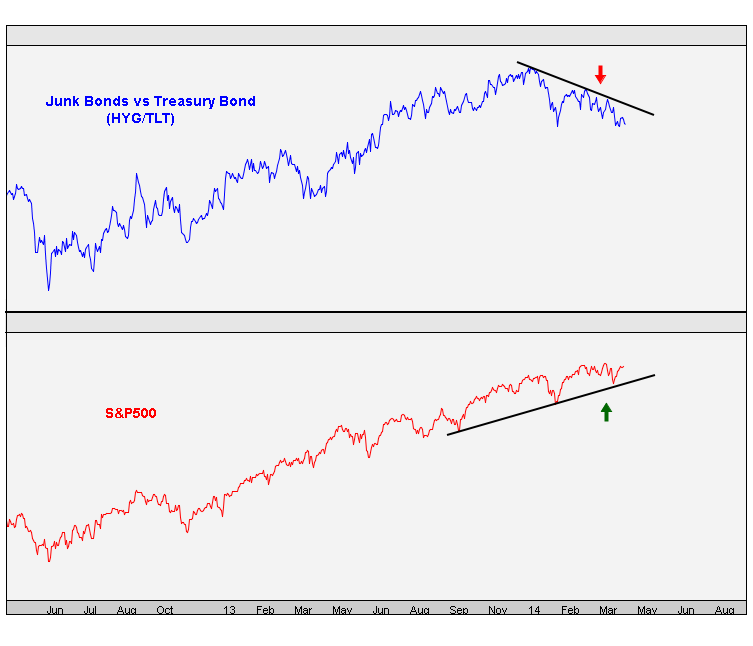 This is something people are starting to talk about. The long end of the curve is falling a lot faster than the benchmark 10-year Treasury Bond Yield. Should we care? What does this mean? And most importantly, how do we profit from it? 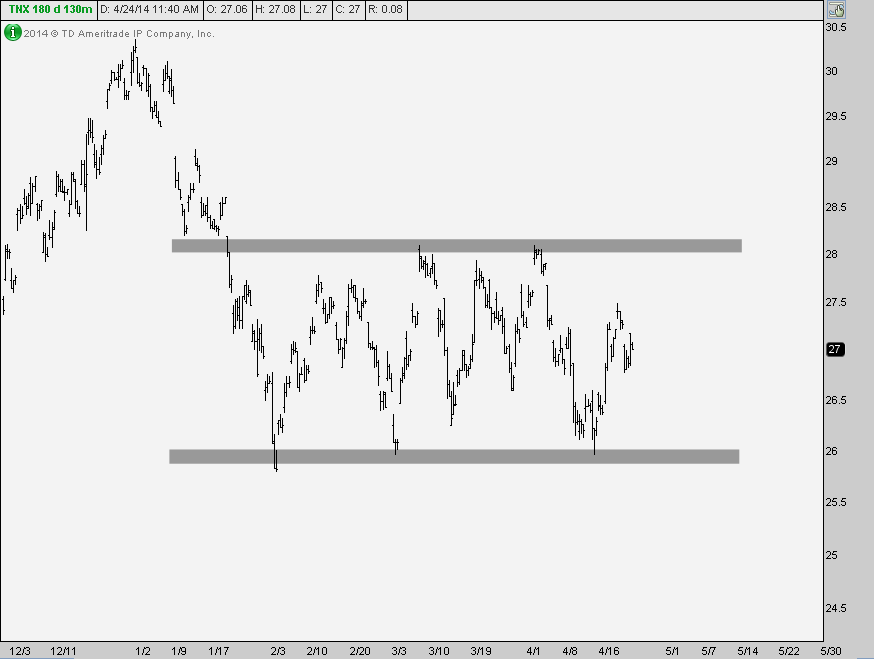 But now look at the 30-year yields. They already broke that support earlier this month and holding below key levels: 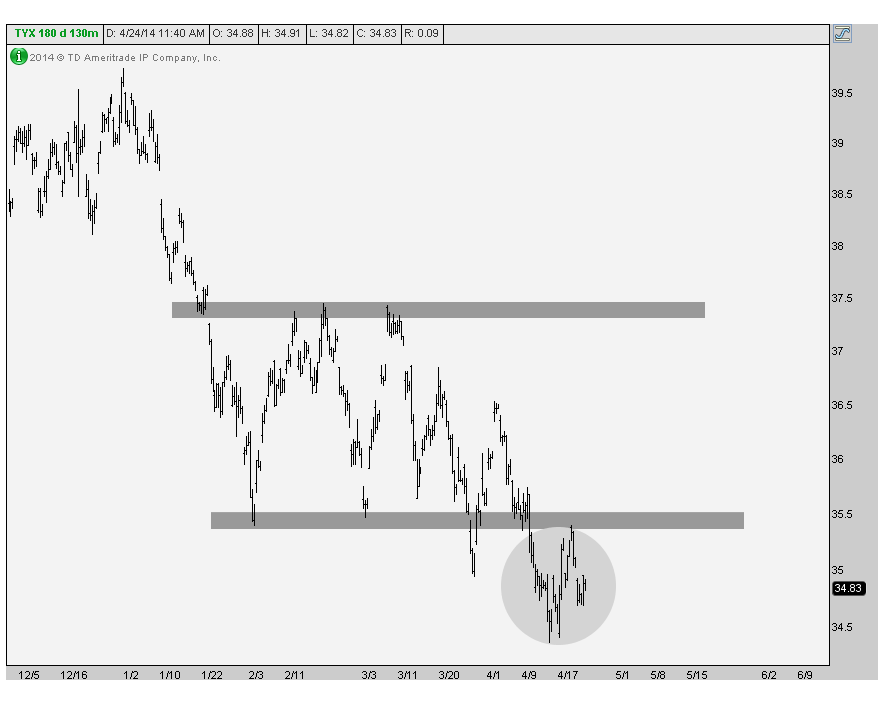 Now look at the spread hitting levels not seen since 2010: 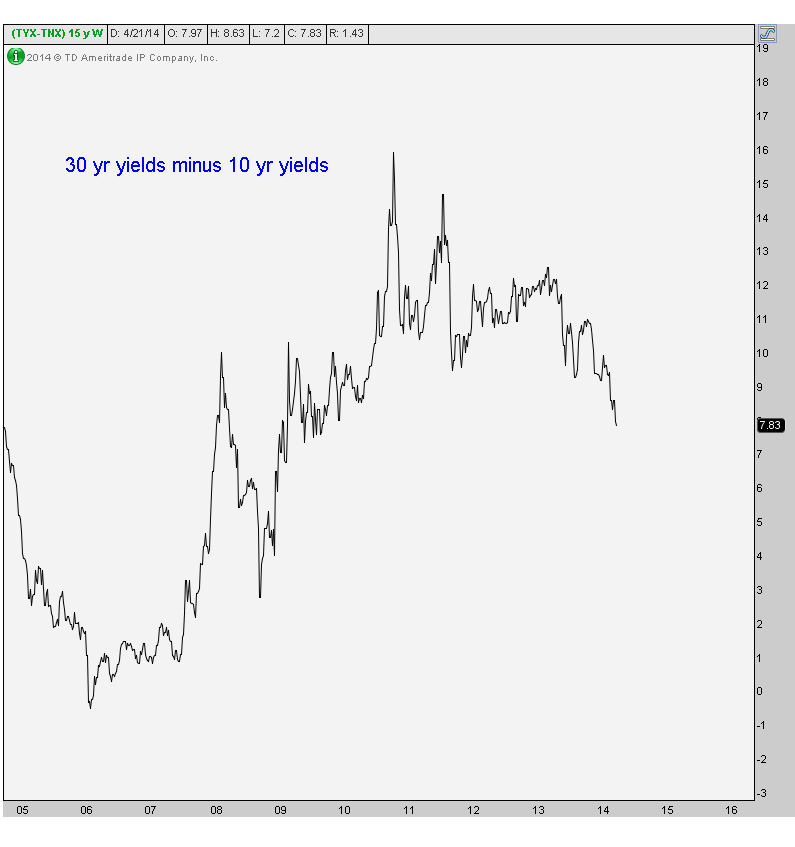 I’ve been bullish about the bond market all year long as we come off bearish sentiment extremes not seen since early 2011. If you recall, yields dropped from 3.7 to 1.7 in about 6 months last time there was this much pessimism in the bond market. I’m in the camp that the 30-year is leading us lower in rates and the resolution out of this 3-month consolidation in the 10-year will be to the downside.

Whenever we see these sort of sentiment unwinds, the trends that are born historically last longer than most people expect. I don’t think we’ve seen much upside yet in bonds, although one can argue that a 9% return in $TLT year-to-date isn’t bad considering the stock market is flat/down for 2014.

I think we have more to go. This flattening of the yield curve isn’t good. An inverted yield curve, for example, has preceded every single recession we’ve had in the US. I’m not trying to be an economist or anything. Not interested. But it is appealing that this flattening process has begun. I can’t say it’s a good thing for stocks.

What do you guys think? How do we profit from this recent development? I mean, other than continuing to buy bonds. Any thoughts?

On Monday afternoon I was over at the News Corp building chatting with Liz Claman on Fox Business. This segment was focused on the sentiment unwind we’ve seen in the bond market over the past quarter.

Today’s video is a follow up to a post I wrote on Monday regarding United States Treasury Bonds and Interest Rates. I think this is one of the more powerful setups right now that global markets have to offer. The risk is well-defined and the target makes a lot of sense. I tried my best to outline this for you in a short video.

I hope you find this informative: