Tradition has it that if you misbehave throughout the year, you might just end up with a lump of coal under the tree on Christmas morning. But going into the end of 2012, it might not be such a bad thing. In case you hadn’t noticed, the Coal sector has been consolidating in a nice tight range for almost 7 months. These narrow ranges typically resolve themselves with a vicious move one way or another. We’re in the camp that this resolution comes with a move higher.

Here is a chart of the Market Vectors Coal ETF ($KOL) in a tight range since May. The first thing that stands out to me here is the higher low that momentum was putting in as prices were making fresh 52-week lows in September. This bullish divergence in the relative strength index is clue number one for higher prices: 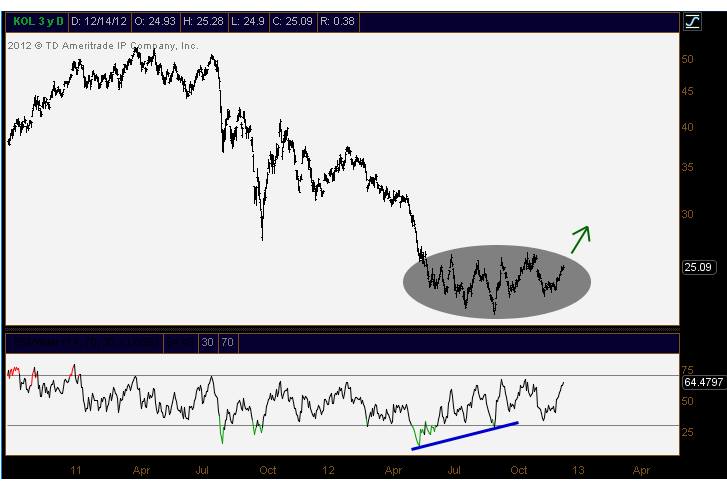 Next, we need to factor in the amount of attempts that Coal has made to get above this $26 level. It’s more of a 50-60 cent range and not an exact number, but the resistance is clear. Currently, this space is working on a 5th test of that resistance. As always, the more times that a level is tested, the higher the likelihood that it breaks.

From a risk management perspective, I’d be looking at November’s lows. We really should hang on to those if $KOL is going to breakout to the upside. A rollover there would signal to us that this space isn’t ready yet and needs some further consolidation.

So we’re watching Coal pretty closely here, and more specifically the components of the ETF itself. I think it pays to dig deeper into this space and maybe get creative with positioning and entry points. As we approach the end of the year, we’re looking at some of the areas of the market that could turn into leaders. We mentioned China recently, and I think Coal should follow that space.