Sometimes a stock doesn’t have to do very well on its own if it can outperform relative to another. In a choppy market environment like this, Pairs trades present some incredible opportunities. Today we are going to take a look at a few Sectors relative to one another. Specifically, the sectors mentioned by Louise Yamada on Yahoo Breakout this week. She pointed to the fact that she doesn’t like the weakness in Financials but likes the strength in Tech, Utilities, and Staples.

The following three charts show the relative performance of the 3 stronger sectors vs Financials:

I think it’s pretty clear that the patterns here are similar. They each appear to be in powerful bull markets that recently entered into a corrective phase. This is confirmed with price as well as the Relative Strength Index at the bottom of each chart. I would be looking for breakouts above these declining channels for entry points into each of these pairs trades. You can also pick some of your favorite names to own in each sector and then go ahead and short your least favorite bank as the denominator in the ratio. Don’t be afraid to be creative.

This is a good one. There is a lot of great work here done by some of my favorite technicians. Last week I had the distinct honor of meeting Robert Sinn and today he talks about why it’s getting harder for him to be bearish. Jordan Kotick points out a few signs that could lead to Bullishness. And I also liked the historical sector weightings post by Bespoke Investment Group.

Robert Sinn: It’s Much Harder to be Bearish (TheStockSage)

It was a wild ride last week. Some of the chart damage was pretty severe, while others held up relatively well. I was looking through a bunch of my charts and these are a few that stood out:

First the Good: Utilities. Believe it or not, $XLU made 52-week highs last week before pulling back with everything else Wednesday and Thursday. The relative strength here cannot be ignored, as it too made new highs. Utilities here remain above their 50 and 200 day moving average while providing decent yields. In this environment, what is better than that? 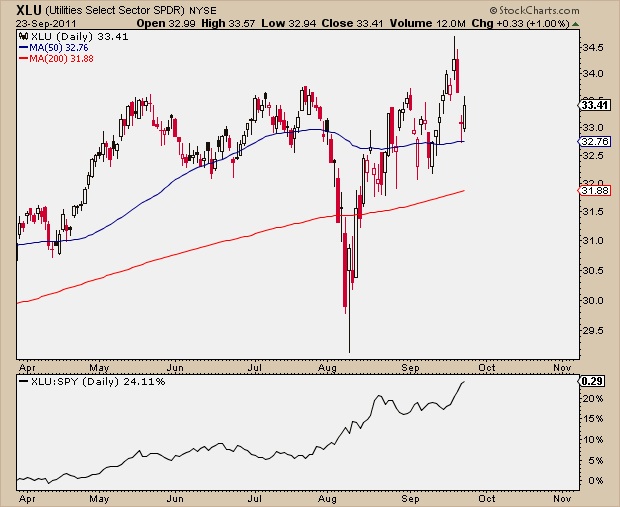 Moving right along, look at Treasuries – WOW. What more can we say? The rally continues. $TLT made new highs last week in an explosive move. As money flowed out of aggressive assets, it seemed like US Treasury Bonds was the only place money wanted to go. I think that it would take a roll over in Bonds for any stock market rally to get going. Prices here are getting a bit parabolic, but that argument could have been made a week ago and a month ago. I have a feeling this one will end in tears. But for the time being, price has certainly paid. 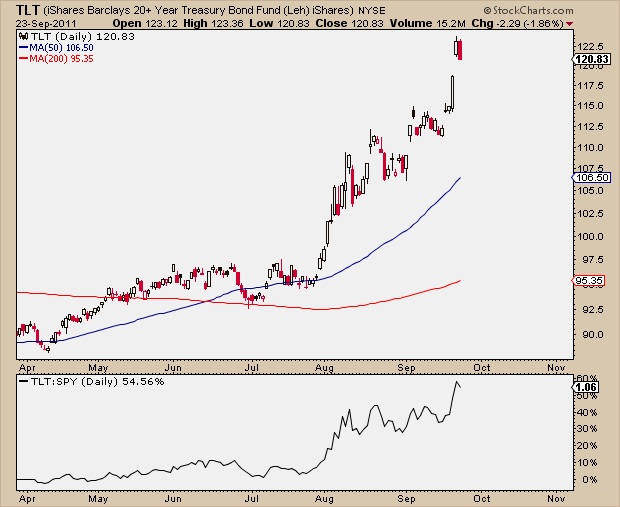 Now for a little bit of the Bad: Gold. It looks like after breaking down last week, $GLD wants to test that $150 level where it originally broke out of in July. We also find the 200 day moving average that could act as some support. Expect volatility to stay, in both directions here, as Gold is going to attract both aggressive and conservative investors. Some might think that Gold is a “safe haven”, and it certainly feels that way sometimes, but last week tells the story. It can be a source of funds as margin calls need to be met: 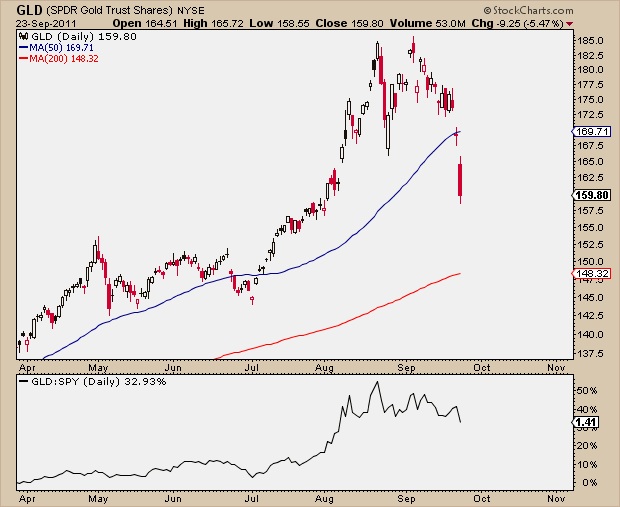 The Nasdaq100 sold off pretty hard last week after failing to stay above it’s 200 day moving average. This failure at a key level came during a week when risk was taken off the table across the board. A few positives, however, are that 1) $QQQ still managed to close back above those June lows. None of the other major averages were even close to doing that. $SPY $DJIA $TRAN $NYA & $IWM are all well below those June lows. 2) The Nasdaq100 made new 52-week highs relative to the S&P500 and 3) we now have a pivot point to key in on around $57. A break out above that could take this index to new highs, but its got some work to do. 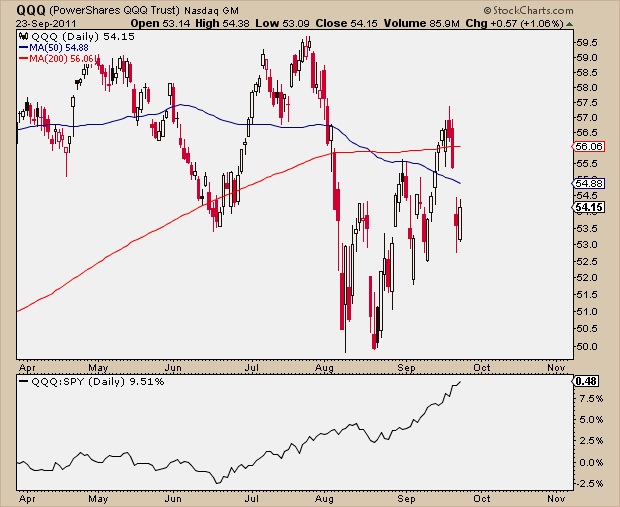 And now for the Bad. This is easy – look at Copper. We’ll use JJC here to keep it simple. After holding up relatevely well this summer, Copper broke down hard and is still in free-fall. So much so, that I had to post an 18-month chart of this one so you can really see the damage done on the chart. This one is not just absolutely bad, but relatively bad as well, as it also made new 52-week lows relative to the stock market. This one is not a good sign for the global economy. We like to watch Copper as a tell for infrustructure demand, and it doesn’t like there’s much out there. 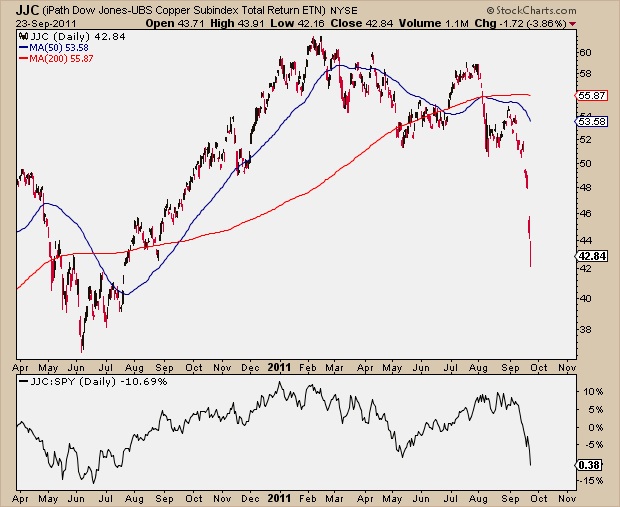 And last, but certainly not least: Financials. New lows across the board for $XLF. New lows relative to the S&P500 (nothing new there) and new lows in price. Not much to say other than, if you’re looking for strength – this ain’t it. 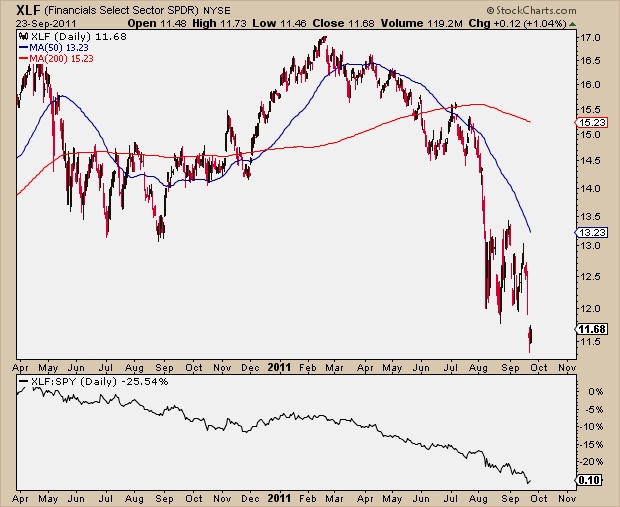 If a miracle rally occurs here in Financials, it would take a close back above $12 where maybe it could spark a short squeeze. I would not bet on it, but then again, when everyone (and I mean everyone) is betting in the same direction, sometimes its worth keeping it on the corner of your screen. Sometimes, these can be the most vicious rallies, face rippers, if you will. Call me when we’re above $12.

Thats my Good, Bad, and Ugly for the week. Things could change quickly so stay tuned…

One of the major concerns that we had late this Spring was that the defensive sectors were the ones showing leadership. Sure, the S&P500 was making new highs in April and everything appeared to be both hunky and dory on the surface. But underneath, defensive groups like Consumer Staples were the ones leading this market and making new highs. Here on Allstarcharts, we were waiting for that important sector rotation to take place to confirm these new highs (See Where is the Sector Rotation May 16th). This sort of rotation is a key characteristic of bull markets. Well the leadership never rotated into the offensive sectors, and here are today with the S&P down over 18% from those Spring highs.

This is going to be something we will continue to watch closely. Defensive sectors tend to outperform the overall market during downturns while some of the more aggressive sectors usually underperform. Here is a chart showing the year-to-date Relative Performance of each sector: 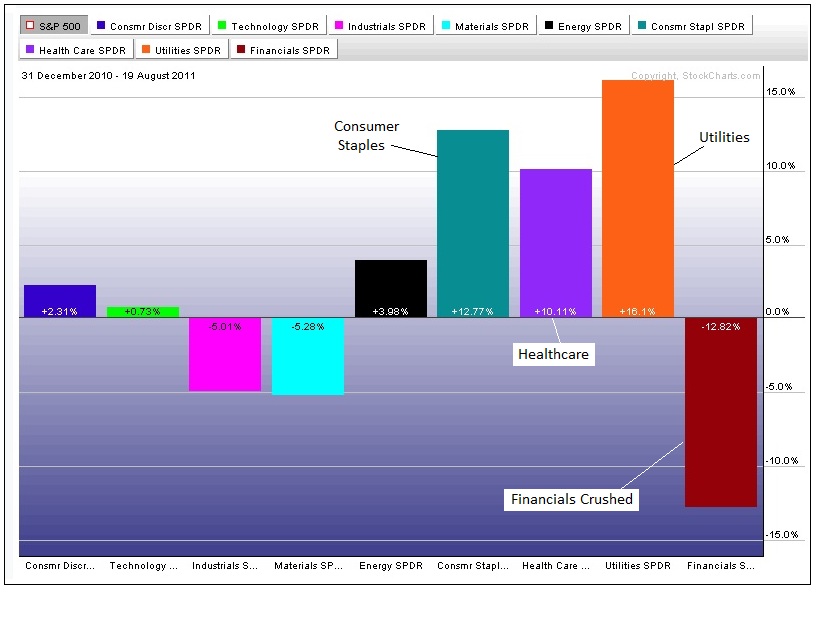 Notice how throughout the year Consumer Staples ($XLP), Healthcare ($XLV) and Utilities ($XLU) have dramatically outperformed the overall market. In addition, the Financial Sector ($XLF) has been absolutely decimated both on an absolute basis and relative to the rest of the market. Watch for changes in this trend for potential changes in the direction of equities as an asset class. 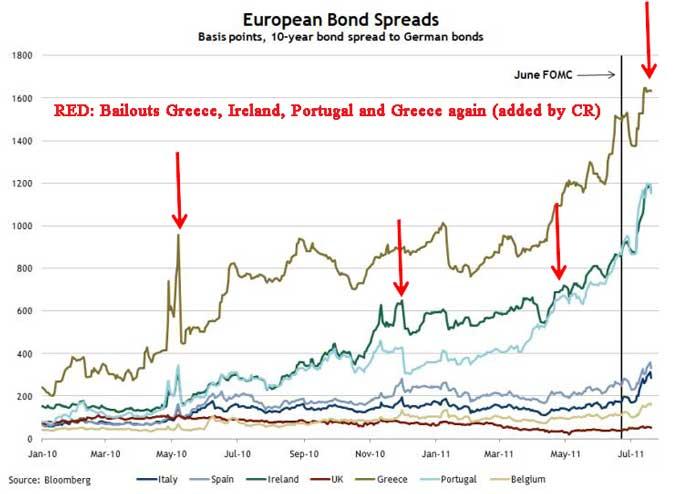 What is Chaikin Oscillator $MSFT (StockCharts)

All of the Countries the US Owes Money to (FlowingData)

Joey Fundora, “I am a Trader” (Downtowntrader)

This morning Goldman Sachs ($GS) and Morgan Stanley ($MS) increased their oil price forecasts by more than 20 percent, signaling a bullish outlook for commodities. According to Bloomberg, $GS boosted its 12- month prediction for Brent Crude to $130 a barrel from $107.  $MS raised its Brent estimate by 20 percent to average $120 a barrel this year and by 24 percent to $130 in 2012.

I want to see how these names are doing versus their Defensive Counterparts like Healthcare, Consumer Staples, and Utilities. First, let’s start out by looking at the Energy Sector ($XLE) vs the S&P500 ($SPY). Call me crazy, but this appears to me like a typical correction back to the 200 day Moving Average and a resumption of the rally:

After seeing how good Energy looks vs the rest of the market I’m wondering if there is similar action in Energy against some of the more defensive sectors ($XLV, $XLP, $XLU):

The answer is YES.