I was down on the floor of the NYSE Tuesday morning chatting with Jessica Menton at IB Times about what we’re seeing so far in 2014. With rates topping out on December 31st and important sectors like Homebuilders and Retailers selling off in January, I think it’s important to listen to the what the market is telling us. January historically warns us about things to come throughout the rest of the year.

The homebuilders have not had a good start to the year. In fact, prices so far have not been able to surpass the December 31st highs in the SPDR S&P Homebuilders ETF (XHB). This brings up an interesting situation. You see, that late December rally in $XHB got prices above the May highs, which up until last month had been the highest levels since 2007 and an impressive 300% above the 2009 lows. But those fresh multi-year highs only lasted about a week. That’s a problem.

The strength into the end of the year was sold right into to start 2014. This comes after a year that, although closed at new highs, underperformed the market for most of the year. The relative strength between the Homies and S&Ps deteriorated for most of last year, specifically in the second half. This is a sector you want to see leading (like in 2012), not lagging.

So all of this brings up a key question – Was that a false breakout in Homebuilders? Because if it was, this could be a big problem. Here’s what I see. This is a weekly bar chart showing the new highs in December failing to hold while momentum has been rolling over: 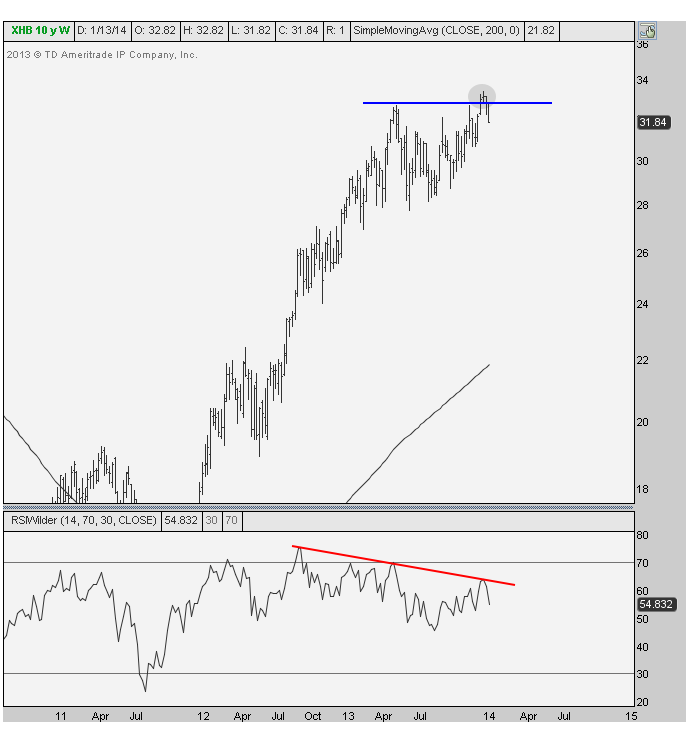 For this false breakout to be invalidated, we need to see prices back above the May highs and momentum breaking out above this trendline into overbought territory. Otherwise, this one is guilty til proven innocent (from a trading and risk/reward perspective).

To me it’s all about finding good risk/reward opportunities. If we’re right on this trade, there is at least another 10% or so to the down side to get it back down to last summers lows. The risk is a couple of percentage points depending on your entry. But the best part about these ‘false moves’ is that the resulting action is typically fast and furious allowing the trader to profit rather quickly compared to other types of positions. Also, you’re usually not sitting around waiting. You typically know whether you’re right or wrong fairly soon. So the opportunity cost is low with these types of trades as well. That’s something rarely accounted for.

Either way, I would expect the result of this situation to have some effect on the overall market. This is an important sector. I’m also watching retailers very closely here as they are also an important sector that has gotten off to a terrible start for the year. More on that soon.

For the last couple of weeks, we’ve seen some pretty serious deterioration across the real estate space. And when I say real estate, I don’t mean new housing starts or new home sales or any of these other useless (for me) data points that we can’t turn into a trade. Last week, we pointed to the false breakout and momentum divergences in Homebuilders. And since then, the selling has picked up. 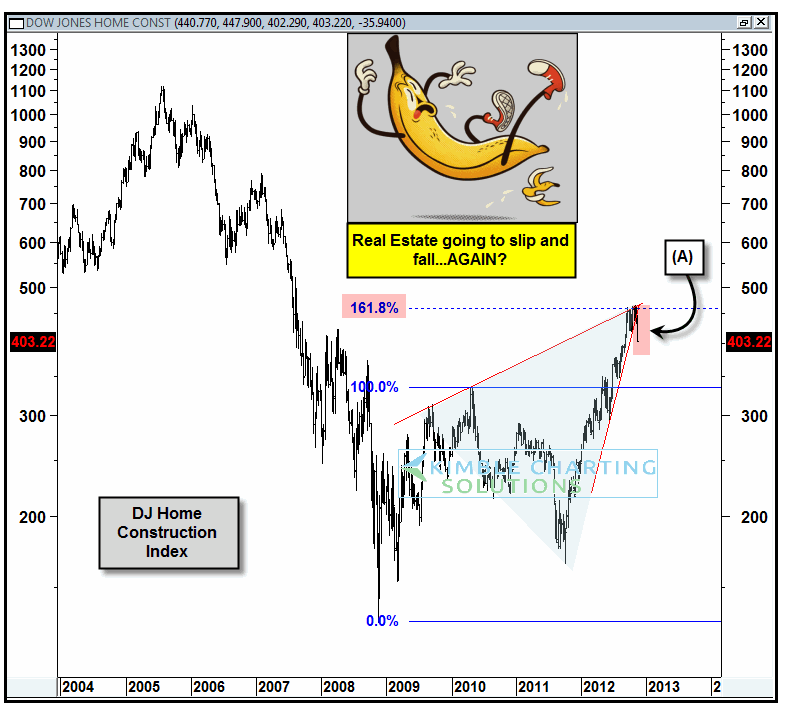 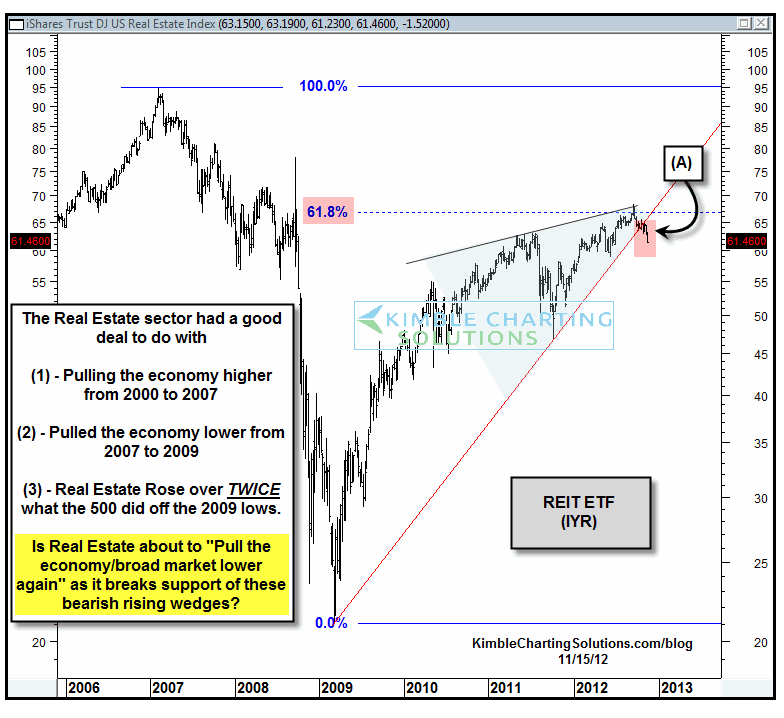 Unless one lives in a cave, most everyone knows Real Estate had a good deal to do with the economic and stock market weakness in 2007 & 2008.  The DJ Home Construction index was a great “leading indicator” for the economy as it started turning lower back in 2005.

From 2008 to present, the Home Construction Index and IYR have reflected a ton of relative strength as they have gained over twice what the 500 index has off the 2009 lows.

Of late both of these Real Estate based tools above, hit a key Fibonacci resistance level while creating bearish rising wedges.  At (A) in the above chart, both are breaking below support.  For the first time in a long time, both of these reflected relative weakness yesterday, losing almost twice what the broad market, even though the Dow was down almost 200 points.  One day does not make a trend, yet this weakness should be respected a ton! 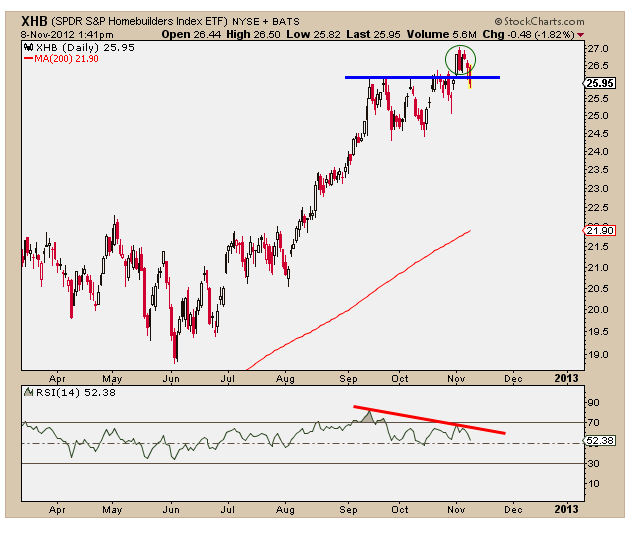 Reuters put together a Google Hangout this afternoon hosted by Phil Pearlman. A couple of money managers and I jumped in and gave our takes on the market. Phil asked me about the Homebuilders and I basically told him that the trade came and went. I think it’s time to look elsewhere short-term. The bigger picture, however, still looks constructive.

My good friend Alex recently brought this chart to my attention. It is a 4 year look at a basket of Homebuilders vs the Vanguard REIT ETF. Notice how for a long time now, these Real Estate Investment Trusts have been outperforming the Homebuilders. I suppose it makes perfect sense, as investors search for yield in a zero-interest rate environment while shying away from the disaster that has been homebuilding.

Here is the $XHB vs $VNQ chart: 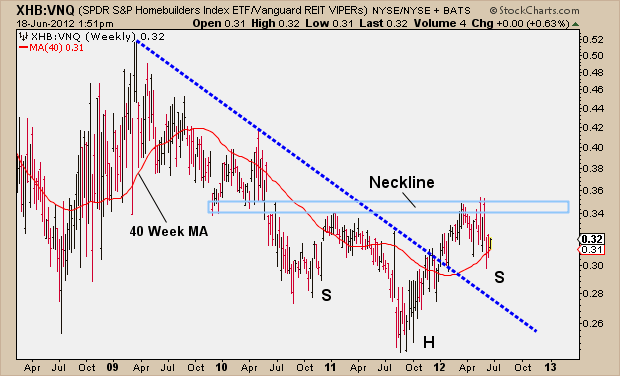 The first thing that I notice is the break in the downtrend early this year. Meanwhile, for the last 2 years, the ratio has been forming what appears to be a massive Head & Shoulders Bottom. The fact that it has taken this long to develop is a good thing. Bottoms of this magnitude are a process, not a single event.

The neckline is sitting right around 0.35 just as the 40 week moving average has turned up and acting as support. But I don’t think there is a trade to be made right this second. Unless you want to take a shot with a stop below the recent lows from a couple of weeks ago.

I think the move is to wait and let this trade develop. We have a fixed level of resistance here going back several years that still needs to be taken out to confirm a change in trend.

But most importantly, I think this chart tells a great story. I’m curious to hear some what some of you fundamental guys think about this potential shift. How about the real estate guys – what do you think?

At the beginning of the year we went over some seasonal tendencies and gauges in a post titled, “What Does the Month of January Mean to You?”. I got a ton of emails and comments on this stuff so I figured I’d follow up with some of the results. Here you go – short and sweet:

Based on this S&P Performance Data – here is my top-10 list. I’m sure Sam Stovall and Bespoke Investment Group will have some solid numbers on this soon. Stay tuned: 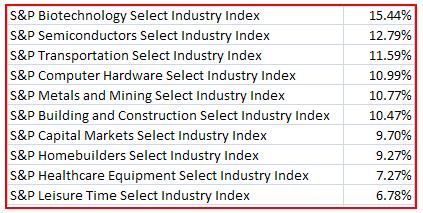 Check. Small-Caps and Mid-Caps outperformed Large-Caps by almost 50% in January: 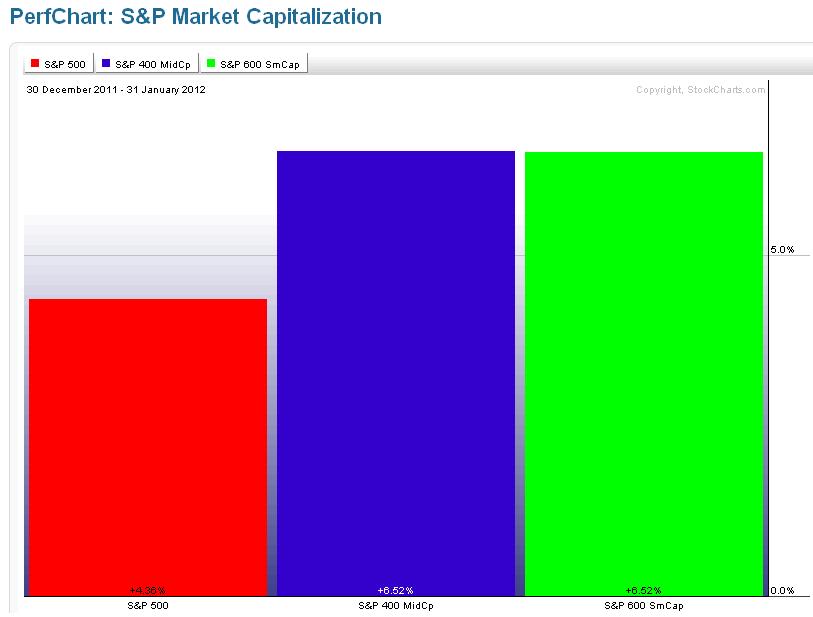 And there you have it folks. Ignore these seasonal trends at your own peril…..