END_OF_DOCUMENT_TOKEN_TO_BE_REPLACED

Since we entered the second quarter of 2015, I’ve been very vocal about how I feel about the US Dollar up here and how I think we can benefit from the currency continuing to weaken since peaking a month ago. I like the beat up emerging markets mean reverting here and think that Energy and Energy related stocks and countries can benefit as well. But also within that theme, I believe the base metal complex can do well in that environment. To me, this all fits together.

We’ve been all over the Energy trade for a while (see here and here), so now I want to turn our attention to Base Metals. We look at Copper as a leading indicator and it’s already up 12% since the January lows and as much as 20% at last months highs. I think the correction we’ve seen the past couple of weeks is just temporary and we head higher. So how do we want to take advantage of this? I like the Metals & Mining Sector.

Here is a daily candlestick chart of the S&P Metals & Mining ETF $XME. To me, this is the cleanest way to explain what’s going on. It’s very simple: We have a very clear downtrend line from last September’s highs. This is where the recent collapse first got started after a huge rally over the previous year. So it makes sense to use this as our reference point: 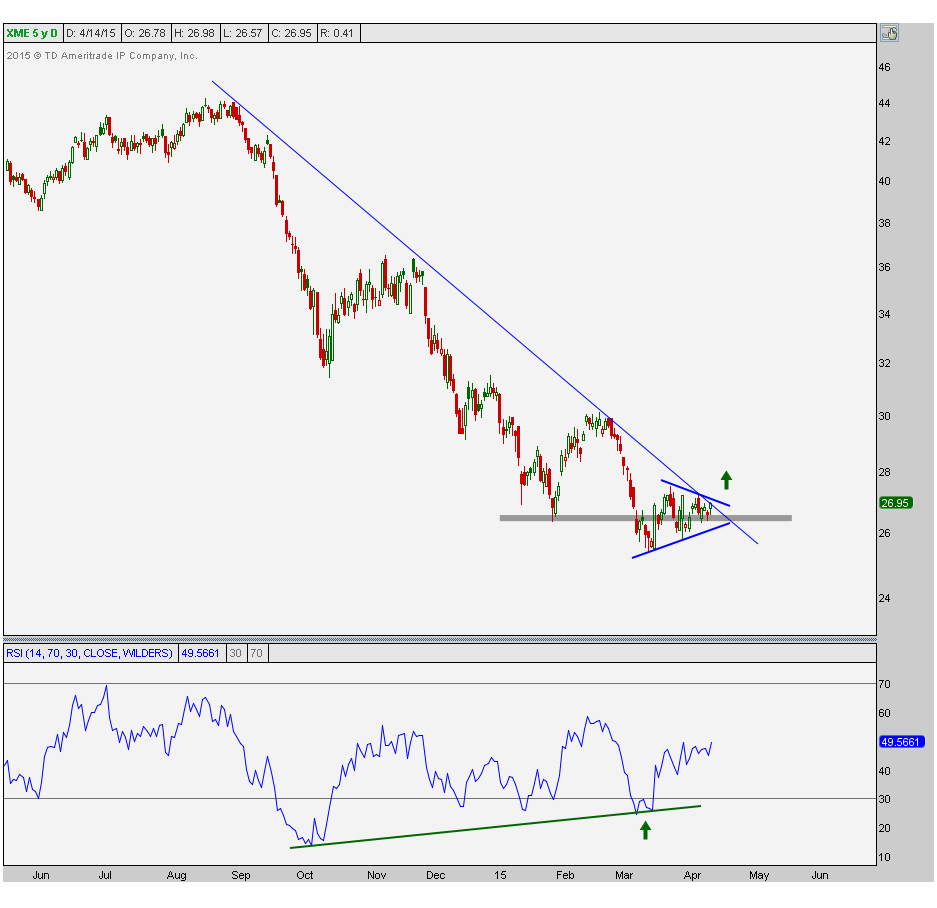 As the price of this exchange traded fund tries to break out above this downtrend line, it is also approaching the apex of a symmetrical triangle since last month well-defined by two converging trendlines. We are looking for a simultaneous breakout above both of these to confirm that we are heading higher and that it deserves our involvement.

The catalyst to do this I believe is the bullish momentum divergence at last month’s lows. Similar to what we saw in Crude Oil and Emerging Markets, momentum in the Base Metal complex put in a higher lows last month while prices made lower lows not seen since March of 2009. Does that month mean anything to you?

We want to be aggressive buyers of a breakout. This is not something we want to be involved with if we are below these trend lines. So this makes the risk/reward very much skewed in favor of the bulls here as the risk cannot be any more well-defined. Companies in this space include the Steel stocks like US Steel, AK Steel, Steel Dynamics and Reliance, but also names like Freeport-McMoRan, Hecla Mining and Royal Gold. This is a very diversified ETF with its largest holdings representing just over 4% of the fund. We like that.

Premium Members of Eagle Bay Solutions receive updates to this chart weekly. Make sure you register to receive our US Sector & Sub-sectors Reports.

To me, Technical Analysis is a study of the behavior of the markets and market participants. This is as opposed to spending time worrying about all of the goods and the services that a particular market deals with. The way we look at it, if the only thing that’s going to pay us is price, then we should probably focus the majority of our attention on it.

Howard Lindzon was nice enough to invite me out to beautiful Coronado for this year’s Stocktoberfest. So I tried my best to explain our thought process when it comes to analyzing markets as well as our approach to portfolio management. Then we looked at some of our favorite trends and what we’re watching for 2013.

Here is the video of my presentation:

The charts might not be very clear in the video so I posted the slideshow here.

This was an awesome couple days out in San Diego. I learned a ton about some startups that are doing incredible things. And more importantly I got to meet and hang out with some of the most brilliant minds that the market has to offer.

A lot of people approached me about sharing my slide presentation so here you go. What I tried to do was to talk about many of the different types of analysis that we do: correlation analysis, sector rotation, momentum analysis, seasonality, sentiment, and most importantly risk management. Then we just talked a little bit about some of the trends that we currently like and what we’re watching closely for 2013. (here is the video)

It’s been a while since we talked about Silver. And I don’t hear anyone else talking about it. So that tells me that maybe we should look a little closer and see what’s going on.

I think the recent action has been constructive and is looking US Steel-ish. A few weeks ago I went on Bloomberg TV and said that I liked the US Steel even though others hated it. Both of these have some similar characteristics: Good risk reward, both somewhat forgotten about, positive momentum divergences, and flattening long-term moving averages.

Let’s take a look (I know I’m sorry about all these lines and colors, but I think they’re all relevant):

First of all, there is longer-term support right around this 25.60-25.70 level in $SLV. This support held in December and rallied hard earlier this year. We went on record loving precious metals back then and we like it here at this price once again.

Also, when $SLV made new lows at the end of June, the Relative Strength Index was already putting in higher lows (just like $X was doing 2 weeks ago). This bullish divergence gives us a heads up not too fully trust that new low – especially when it comes at key support levels.

Trendlines have been broken. From the highs in late February you can draw an aggressive trendline, or a more conservative trendline from the next lower high – no matter, both have now been broken.

The moving averages have flattened out. This is one of the reasons that I liked $X. The breakout attempts earlier in the year ran into declining 200 day moving averages that just weren’t ready. This consolidation (in both $X & $SLV) allowed the smoothing mechanisms to flatten out, making it much easier to break out from. The 50 day moving average in $SLV has helped as well, now flat.

So this is why I like the recent action in Silver. But the most important thing is the risk/reward (always). We’re a buck and half above key support, with a ton of upside (at least mid-to high 30s). That’s the sort of proposition that we’re constantly looking for. 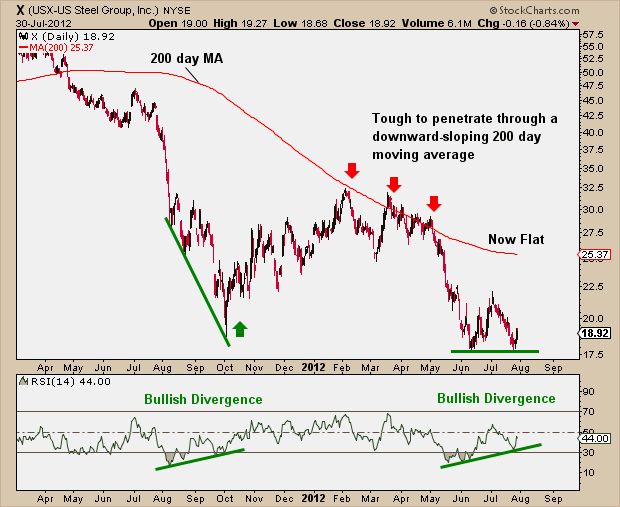