One of my favorite things about the market is watching sentiment shift from extreme bearish levels to extreme bullish levels after price has already made its big move. Market participants like to travel in packs and when those packs get to big, the unwinds can be spectacular. Most recently, this shift in sentiment can be seen in the US Dollar. They hated it in May, and after a monster rally, they now love them. Do you see how backwards that mentality is? So it’s up to us to take advantage of it.

Here we are looking at a weekly candlestick chart of the US Dollar Index. Since 2005 we have been in a symmetrical triangle well-defined by these two converging trendlines. After the epic rally since May, prices exceeded the upper of the two trendlines. But as you can see in this chart, it doesn’t seem to be holding: 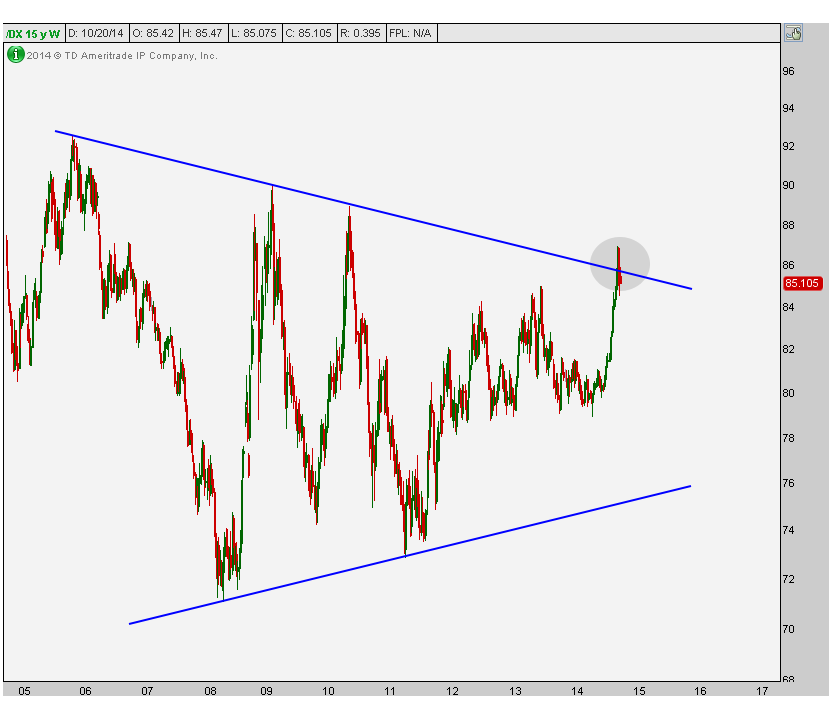 Sentiment is such a powerful tool. Most members of the media caught on to this trend way too late, as usual. And with that tardiness, market participants have blindly followed along. This is why we focus on price and market behavior as opposed to “news” events. Here is the sentiment data for the US Dollar Index over the past year:

When price action and sentiment agree with one another, we generate great signals. We had a buy signal in May and have suggested selling the Dollar throughout the month of October (see here). At this point, it is really starting to look like a failed breakout. I am not interested in the reasons why, perhaps the fed, lower rates, stronger euro, whatever. Why isn’t our problem. We like to worry about the what and the when. And from where we sit today, it still looks like lower prices are coming for the Dollar Index.

From a risk management standpoint, we would really only want to be long the US Dollar Index above this downtrend from 2005. Below that and there is no reason to be involved with this thing, especially now that everyone loves it for some reason.

This is such an interesting market right now….

Make sure you are getting our weekly reports to stay up-to-date on what’s happening in the Dollar and other currencies and commodities around the world.

Very quietly the US Dollar Index has been hitting levels not seen in 10 months. For the first time I’m starting to see this development getting some of the attention it deserves. I think is now a good time to bring up this topic for a couple of different reasons. First of all, strictly from an educational perspective, it’s good to review the initial entry and risk/reward scenario that originally got our attention. Secondly, to address the more important, What do we do now? question.

Let’s discuss the initial entry point. I believe what we should really take away from this is the fact that the risk/reward was incredibly skewed in favor of the bulls back in early May. The fact that it worked isn’t the point. Because even if we were dead wrong on the trade, had it rolled over and stopped us out, the amount of risk being taken was a tiny tiny fraction of the upside implications had we been correct. The outcome is not the important piece here, it’s the process.

The detailed post from early May broke down the sentiment towards the US Dollar Index, historic resistance in the EUR/USD at the time, which represented about 60% of the Dollar Index and most importantly the failed breakdown below key support that couldn’t hold for more than a few hours. The idea was that we only wanted to own Dollars above that failed breakdown. Below that and all bets were off. But as we’ve seen time and time again, when everyone expects something to crash, in all likelihood it probably won’t. At the time, we were below 1.5 standard deviations below a 1 year rolling average of public opinion towards the dollar. In other words, extreme bearish levels. This isn’t the time we want to be shorting a name in that position, we’d prefer to be looking to buy it.

On May 8th, the Dollar Index broke below last October’s support on an intraday basis before reversing hard to the upside. I’ve seen intraday reversals like this turn into epic squeezes in the past, hence the title, “The Epic Squeeze Higher in US Dollar Just Began”. Meanwhile, the Euro which represents a huge portion of this index was simultaneously failing at a 6-year downtrend off all-time highs. In fact, the same day that the US Dollar made that intraday reversal higher, the EUR/USD put in an intraday downside reversal confirming a failed breakout. As usual, from false moves come fast ones in the opposite direction.

Again, I just want to reiterate that this has nothing to do with the fact that it worked. I think this is a similar pattern that we’ve seen before and one that we will see many times over. It’s the process that led us to this skewed risk/reward that I want to stress. I promise it will help us enter a position of another kind in the future. US Treasury Bonds coming into the new year is another good example of this sort of unwind.

Okay great, the trade worked. But what do we do now as we run into all this resistance from last Fall. Also this area represents the 38.2% Fibonacci Retracement from the decline since last Summer. Realistically I would have to expect some sort of recognition of supply up here after such a huge move that occurred so quickly. Furthermore, the sentiment in the US Dollar Index has exploded higher now up above 65% bulls from down under 30% just a few months ago. Amazing how sentiment shifts so quickly after a rally like this. We’ve seen these sentiment unwinds in the past and I promise we will see them again. But right now, sentiment is no longer a reason to own Dollars. It’s not a reason to sell either, just not a reason to buy. 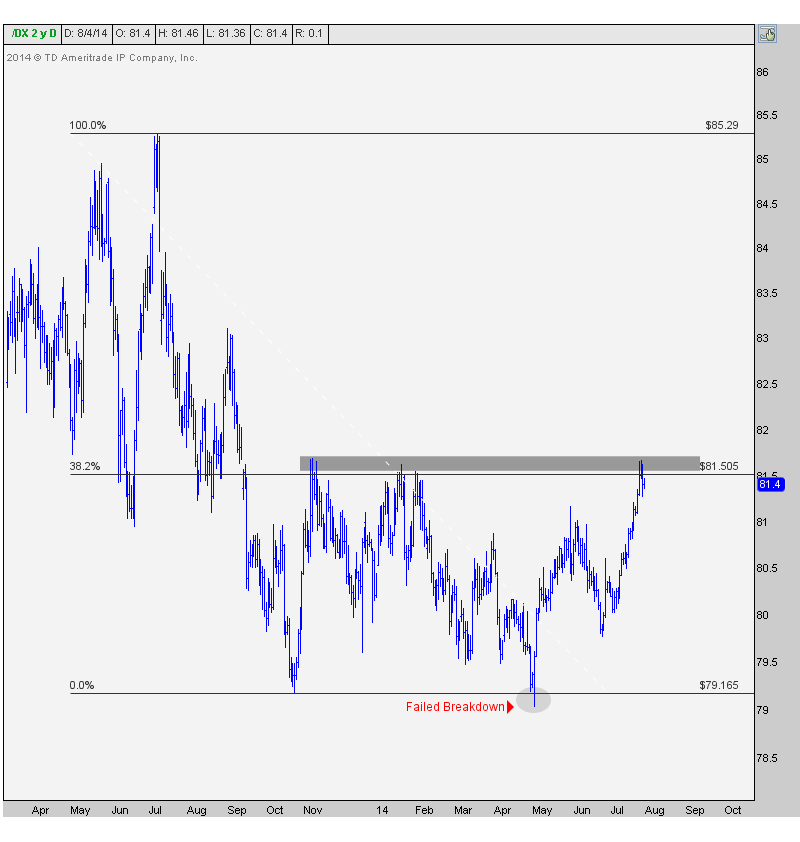 I’d let things chill out here for a bit. At this point, I would only feel comfortable owning Dollars above that former resistance. If and how this breakout occurs will tell us a lot about the Dollar’s strength. If we continue through this level barely addressing this former supply, I would take this as extremely bullish, but harder to trade. Truthfully I would love to see a nice tight consolidation up here for a week or two in order to set up another favorable risk/reward opportunity, especially as this trend is still higher. But the market rarely makes it that easy on us. In fact, Mr. Market usually tries to do the opposite and make it as hard on us as possible. Just the way it is.

However, I continue to believe the path of least resistance, from a more structural perspective, is still higher. But tactically, we want to be a little patient up here and respect that former supply. I’d be surprised if we didn’t head up and retest the highs from last Summer. But up here right this second, a little patience is probably the best approach. We’ll see.

REGISTER HERE for more information on how to access these charts with commentary and annotations on a weekly basis.