END_OF_DOCUMENT_TOKEN_TO_BE_REPLACED

We held a free webinar this week to show off our new ChartBook and discuss how to best invest for 2016 using intermarket analysis. At All Star Charts, we use a global top/down approach in order to take the weight-of-the-evidence in Stocks, Commodities, Currencies and Interest Rates to come up with a theme. Once we have a major global theme, we will break it down to specific U.S. Sectors or Country ETFs and either buy or short individual ETFs or stocks to express our theme using strict risk management procedures END_OF_DOCUMENT_TOKEN_TO_BE_REPLACED

Shares of $TWTR got killed in the second quarter and have come down near a key downtrend line from late 2013. There are people who come out and make a lot of noise about sources and rumors they are hearing about a buyout, but as usual, listening to noise like that can get expensive quickly.

We trade stocks, not companies. So we want to analyze the supply and demand for the stock and try to ignore the news surrounding it as much as we possibly can. Remember usually those that are spreading rumors get paid to make noise, not money in the market. Today we are focusing on supply and demand dynamics for $TWTR stock.

Here’s how I see it: When shares broke down in April, there were a lot of people trying to bottom fish all over the place. I figured since it was trending down below a 200 day moving average that was rolling over, it was dead money at best and decided that the opportunity cost was too great to bother with.

The rumor spreaders really got going earlier this month and the stock popped for a hot second. But supply and demand, which is what controls the direction of stocks, overcame all of that (as usual) and made it perfectly clear to us that supply exceeded demand.

Going forward, here we are at a key downtrend line going back to the lows in November of 2013. Outside of the brief breakdown and quick recovery last Summer, this has been the important level of support which held last July and again in December. After today’s gap lower, prices are right there once again. 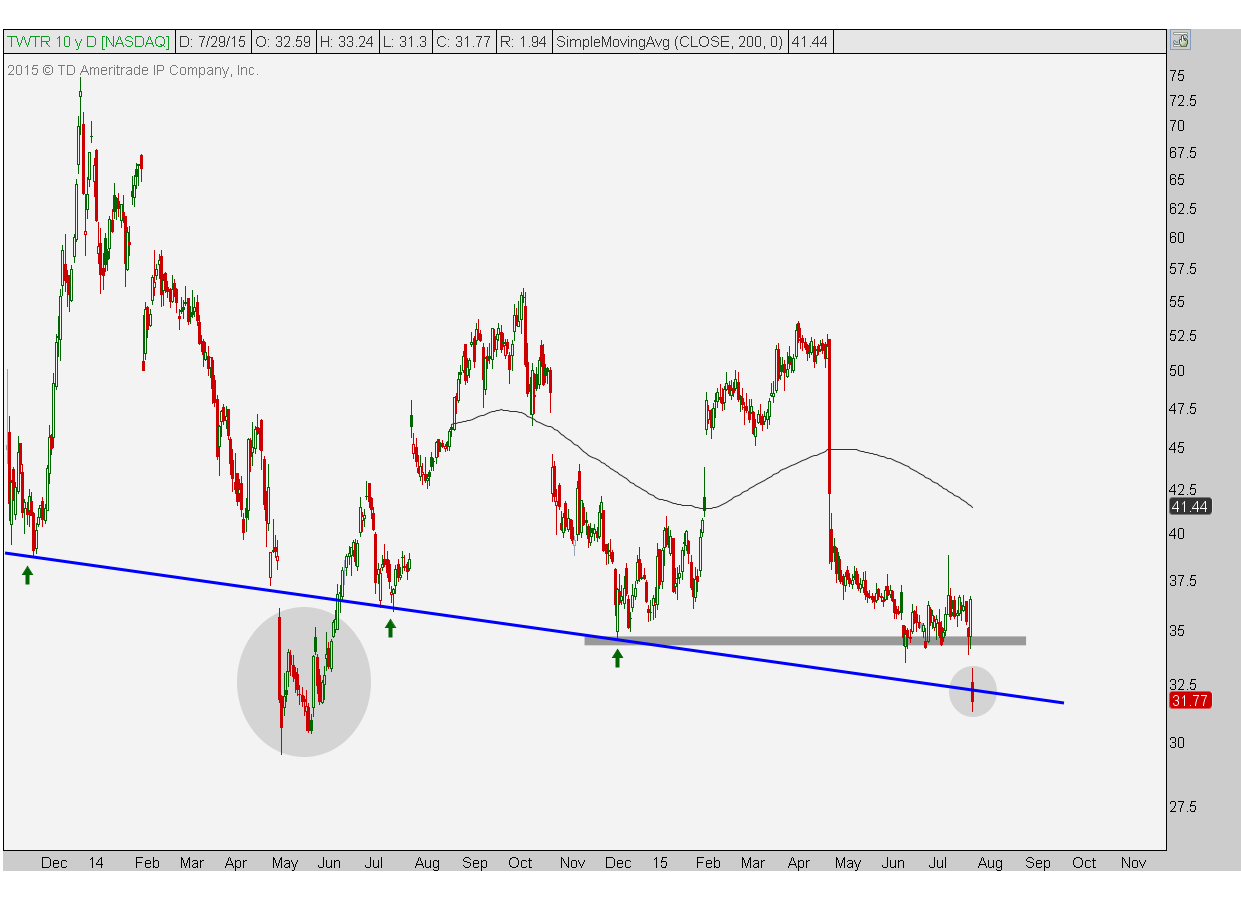 The problem I see is that even if prices hold this level, we are now below all of that support since last December (shaded in gray). This range we had been in since early June resolved to the down side. That can’t be good. I would expect that if we get any rallies from here it should still run into trouble as that former support is most likely going to turn into resistance.

Let’s take it one step further. Let’s just say that prices do hold this downtrend line. Let’s just say hypothetically that it then recovers and quickly gets back above all of that former support that we said should turn into resistance (near $35). Then at that point, prices still have to breakout above the upper end of that two month range mentioned above. Again, even after that, we have a downward sloping 200 day moving average above head which just points to a downtrend or lack of trend at best.

Knowing all of this, is $TWTR the stock you want to own? Can it overcome all of these resistance levels and rip towards $100? Of course, anything can happen. Will the rumor spreaders be right one day and someone comes in to buy them out? Sure, it’s possible. But when you take the weight-of-the-evidence and see all of these barriers that go against any bullish thesis, is this really where you want to be?

It’s not for me. I would continue to stay away as we’ve been suggesting since April. When S&Ps are a tiny percentage away from an all-time high, is a stock making new 52-week lows really the one you want to own? That just doesn’t make much sense to me.

This week I was over at Fox Business following up on two recent appearances on the show where we discussed Internet and Social Media Stocks. After this big breakout in the Social Media sector this month, we break it down to a few of my favorite component.

Since the initial peak after its IPO in 2013, shares of Twitter have been trending lower, well-defined by a series of lower highs. Over the last few months, however, shares were able to stabilize and put in their first lower high since the lows last Spring. This has now given Twitter the appearance of more of a large sideways consolidation, rather than the downtrend that we just pointed out.

Here is a daily candlestick chart of $TWTR. What stands out to me here is how after the gap higher in shares early last month, prices have remained up here near the downtrend line from December 2013, rather than correcting to the downside from this resistance level. To me, this is always the more healthy way to consolidate gains: 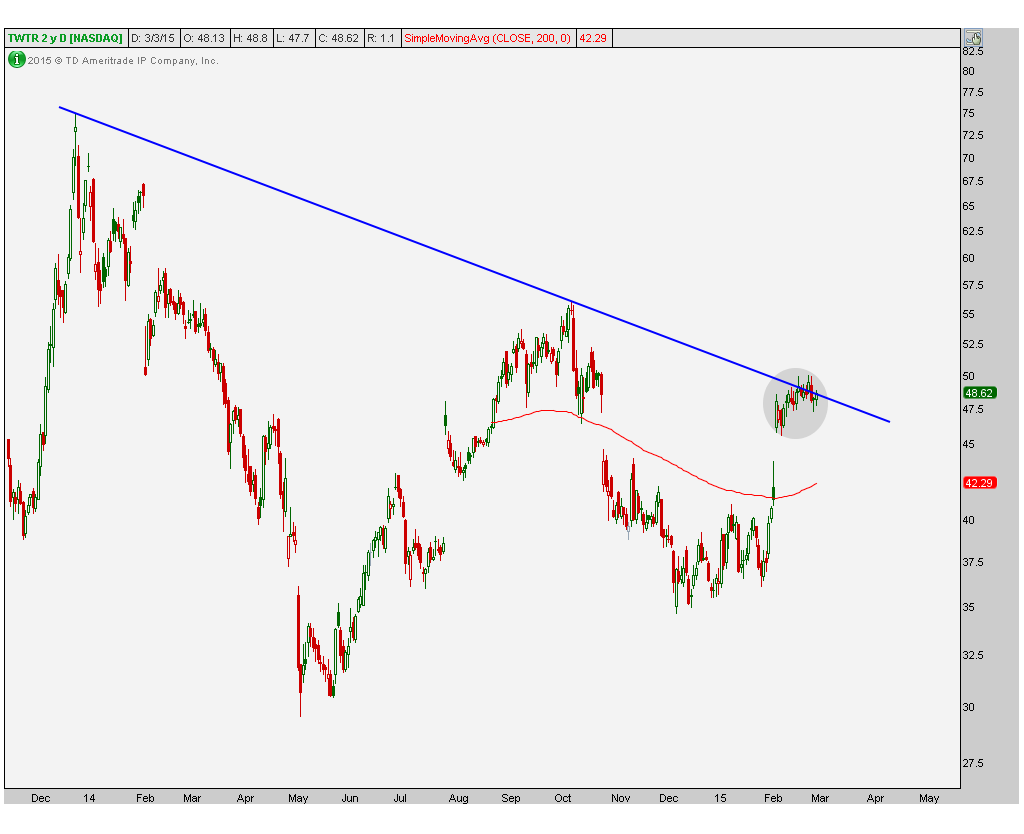 I’ve been arguing that the longer shares remain up here near this downtrend line, the higher the likelihood that we break out. I think this would be a very bullish development if prices resolve themselves to the upside above the upper of these two converging trendlines, especially with what is now an upward sloping 200 day moving average (red line).

We want to be aggressive buyers of that breakout if and when it comes. I find it hard to be long Twitter if we remain below this downtrend line. I’m in the camp that a breakout happens soon and we want to be all over that. I would expect some acknowledgement of overhead supply near 56 based on the highs from October, but ultimately I think we take those out and put in new 52-week highs sooner rather than later.

Now look at the chart relative to the S&P500. This is a ratio chart comparing TWTR to SPY. Notice the similar downtrend line from the highs in late 2013. I love to see breakouts in price that are accompanied by breakouts in relative strength. To me, these are some of the more powerful bullish resolutions: 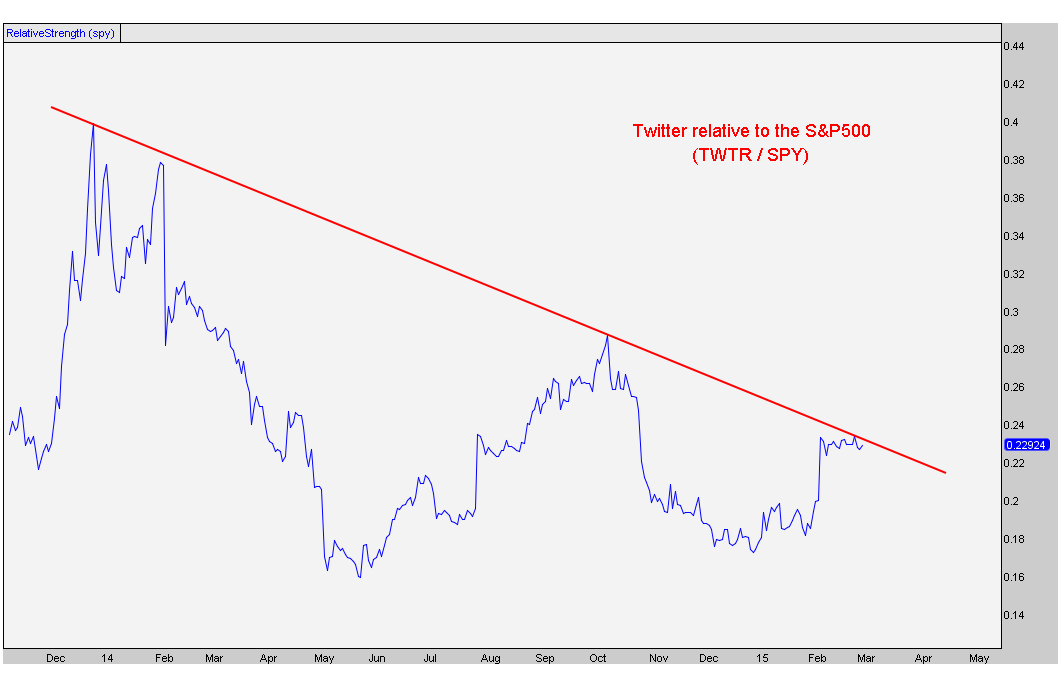 Finally, risk management-wise, if shares of $TWTR never take out the highs from last month, then fine, we’ll look elsewhere. But something tells me this one is coming soon and we want to be paying attention. 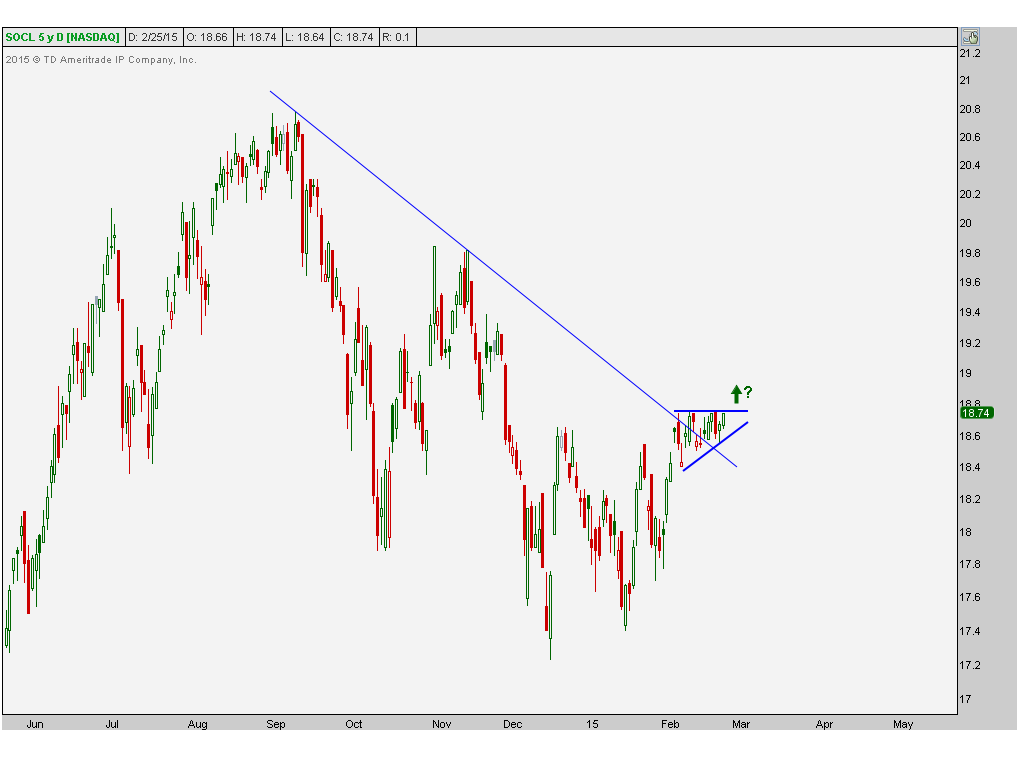 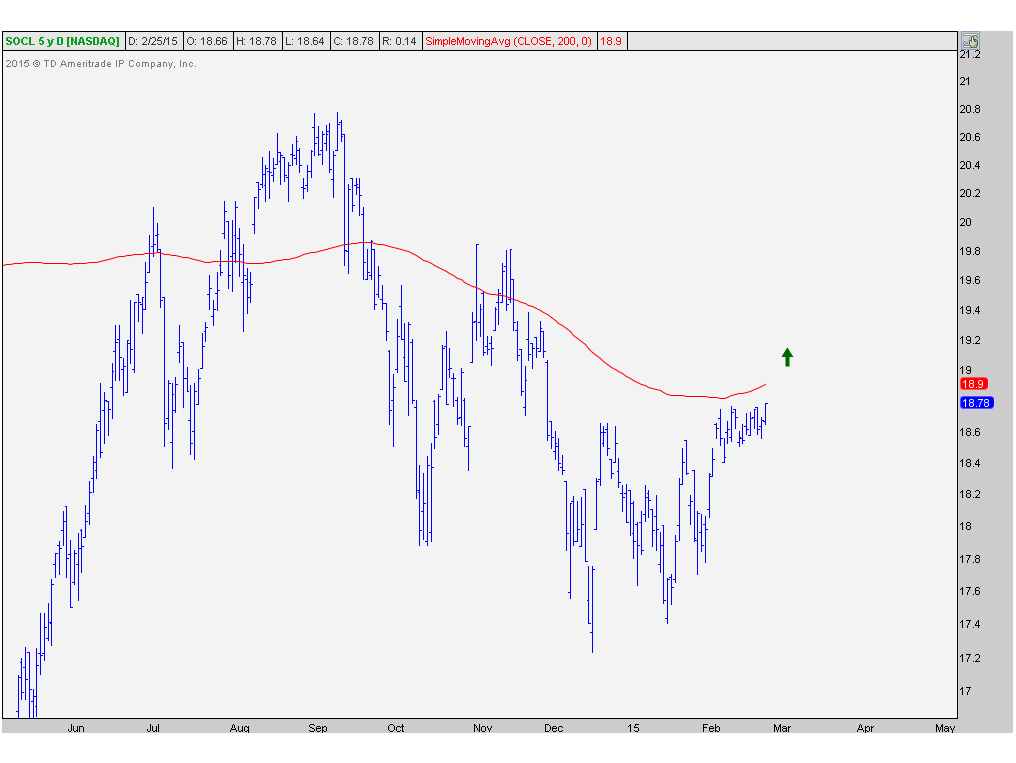