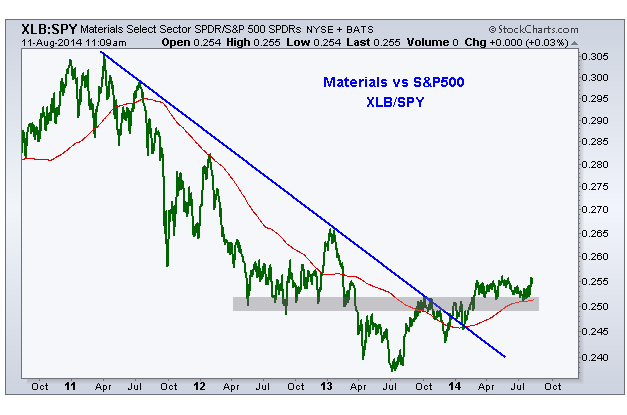 From False Moves, come fast moves in the opposite direction. This is precisely what we are seeing today in Basic Materials. Last week the $XLB broke down below key support, only to recover today get back above resistance. There is similar action taking place in the Financials ($XLF). Brian Shannon did a nice job last night explaining the change in the supply and demand equation that causes this sort of action [Click here to see video – discussion towards the end]

Back to Basic Materials, check out the island reversal in the chart and comments via Arthur Hill from Stockcharts:

“Recent volatility is making rare patterns not so rare. The chart below shows the Basic Materials SPDR (XLB) with its second Island Reversal in as many months. The most recent pattern formed with a gap down on Thursday, a consolidation Friday-Monday and a big gap up today. Shorts on Thursday-Friday-Monday are now trapped on the island with losses.“ 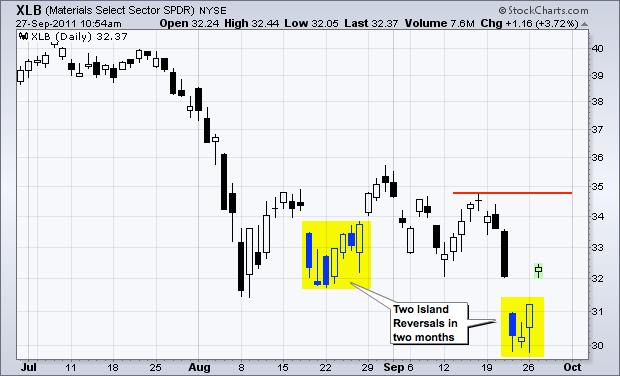 I’m watching $35 as the next important level of resistance. Here we find the September highs and the downward sloping 50 day moving average. I have to believe there is serious trouble at that level. If you’re long the sector, it may be a nice area to take some stock off the table.$DD $FCX $DOW and $MON are a few of the major components of this space.