From the Desk of Louis Sykes @haumicharts

One of the common criticisms of technical analysis is that it’s all self-fulfilling prophecy.

Rather, it operates on a single dimension, where market events are caused either directly or indirectly by a preceding prediction by technician that it was going to perform a certain way.

An intuitive example of the self-fulfilling prophecy hypothesis (SFP) is the classic technical analysis principle of support and resistance.

Those who favor SFP argue that markets only sell off at resistance and bottom at support because other traders identified these levels and acted according to technical analysis principles.

After all, a self-fulfilling prophecy is defined as a person or a group’s expectation for the behavior of another group bringing about the expected behavior.

Within the industry, arguments like these tend to get hyperpolarized and over-divisive. That’s not surprising considering there’s still a cohort of investors that argues technical analysis is like astrology — completely worthless and of no substance.

So, as it is with most things in life, the truth is somewhere in the middle.

When it comes to the SFP debate, I think to some extent, technical analysis does operate under such a framework. It’s particularly true when it comes to my area of specialization — cryptocurrencies.

In the stock market, there’s an endless stream of strategies that you’re not going to see in the relatively immature cryptocurrency market. And the vast majority of investors in traditional markets operate outside of the realm of technical analysis.

Long-term stock returns are driven by fundamentals, earnings, and individual idiosyncratic drivers. And equities are significantly more liquid than cryptocurrencies (more on this later).

In crypto, fundamentals are, at best at this point, extremely thin.

Cryptocurrencies don’t have income statements and balance sheets, nor do they have management teams. And discounted cash flow models don’t exist in the metaverse (thank the lord).

Consequently, technicals provide the most valuable information for participants in this space.

This is the main reason technical analysis applied to cryptocurrencies has a strong element of “self-fulfilling prophecy” to it.

The major component of SFP within cryptocurrencies is support/resistance trading, as this is the essence of how traders set their invalidations within these markets.

Unlike other tools of technical analysis, support and resistance are rather objective in that they can be simply identified as prior peaks and troughs of price action.

Other indicators — like momentum, correlations, and intermarket analysis — get more subjective and become less driven by the SFP nature of technical analysis.

An incredibly common pattern in cryptocurrencies — without regard to time frame — is the failed move.

We look at a lot of charts, and in no other asset class are failed moves this common. They’re even so common that we actively anticipate that retests of crypto support and resistance levels will initially overshoot. 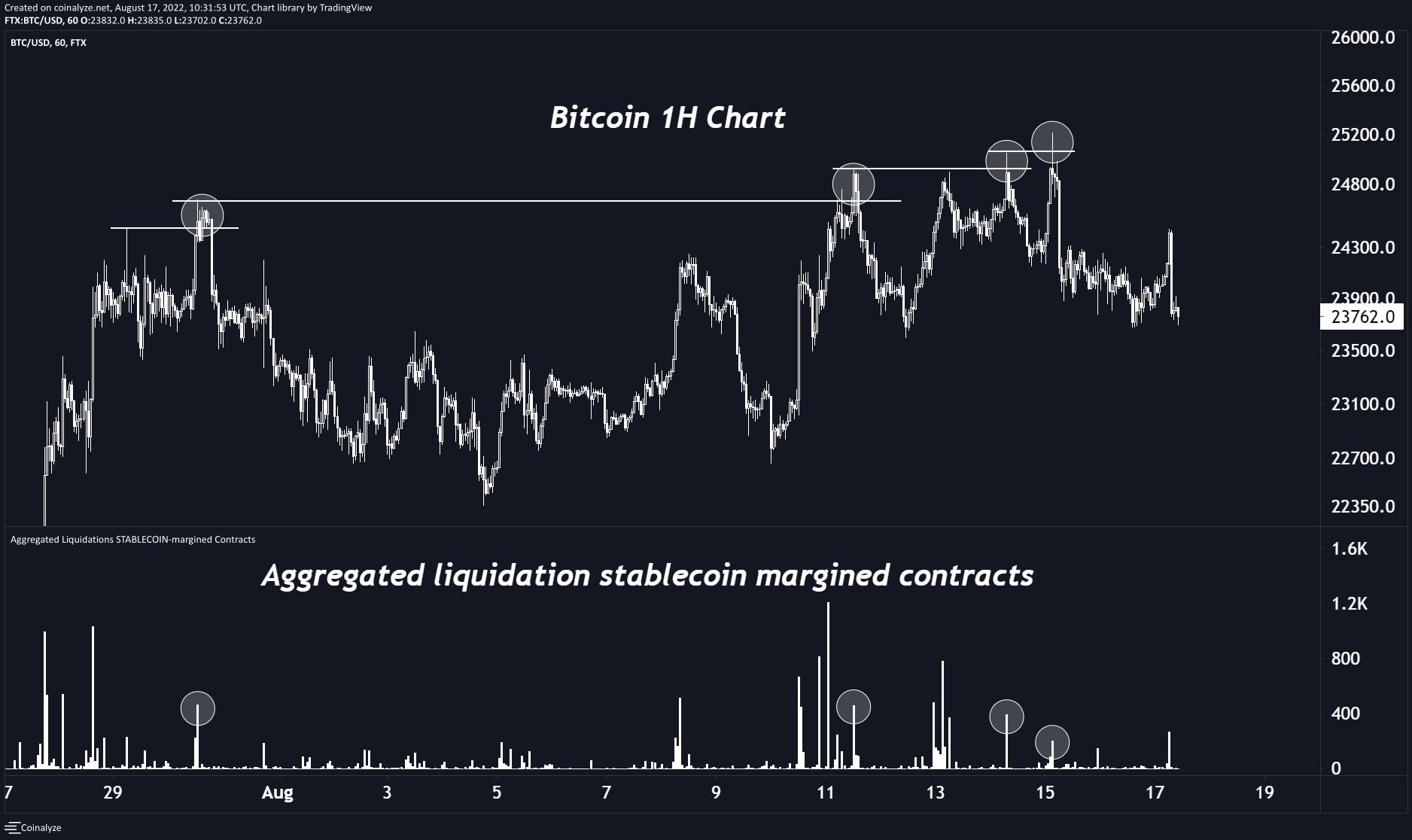 This is when shorts are pushed out of their positions because they don’t have sufficient margin to collateralize them.

Because technicals are the primary tool for crypto market participants, those participants will often set their invalidation levels just beyond support and resistance levels.

As a result, whenever the market puts in a high or a low, often there will be a lot of untapped liquidity beyond these levels where traders have set their stops.

Smart money knows this, and it takes advantage of the supply/demand extremes of these forceful selling/buying events, pushing prices beyond support and resistance levels.

In this case, whenever price wicks above these previous highs, all the countless traders who set their invalidations above these levels using technical analysis have to cover their shorts by buying back their position.

And all this liquidity allows smart money with lots of capital to execute their trades and profit from the supply and demand extremes.

This SFP aspect is put on full display when we consider the liquidity delta of legacy markets to cryptocurrencies. It’s far easier for a large trader to swing prices in an altcoin to liquidity zones than it would be in Apple or the S&P 500.

If you don’t believe that this type of trading happens, BitMEX quite literally used the SFP nature of technical analysis to regularly contribute to price wicks and liquidation cascades:

This kind of short-term trading isn’t our game. But the action does support SFP when it comes to cryptocurrencies.

If you want to trade in these short-term time frames, a little knowledge of order flow and liquidation data goes a long way to ensure you’re not getting constantly faked out on your invalidations.

Even when we venture outside of short time frames, this price action happens all the time. It’s not isolated to intraday action, and stop hunts are made much easier considering the ample liquidity traders set below support and resistance levels.

I find it a tad mystifying that people use SFP to make an argument against technical analysis. I find it adds further value to the process, if you’re aware.

For instance, whenever I analyze tests of prior support and resistance levels, I now actively anticipate false breakouts first. And, when personally trading these setups, I’ll often have little conviction until a false move has happened.

Again, there’s nothing “false” about them. The market is merely grabbing enough resting orders to fuel the next move.

Trading is like a competitive video game to me.

You need to understand yourself. But you also need to be aware of your opposition. That’s how it is in any game.

Understanding where other traders are throwing in the towel provides a lot of edge beyond elementary support and resistance identification.

Some of the smartest traders in crypto don’t use technicals per se. But they do draw lines on charts just to see where other traders are setting their invalidation levels.

There are common technical analysis levels that traders clearly react to. And it’s most certainly possible to trade in anticipation of reactions to these levels.

Being realistic that some of what we do is driven by a self-fulfilling prophecy is nothing short of prudent.

Equally, it only lends further support to the practice of charting by the right hands with the right mindset.

Thanks for reading, and please let us know if you have any questions!