The semiconductor index has likely caused both longs and shorts a bit of angst over the past several weeks as it failed to make any directional progress near the top of its 10-month range of 560 to 680. Analyzed on its own the index is providing little conviction for the bulls or the bears, but a look at the individual components may provide some clues regarding the next directional move in semiconductors as a group.

The daily chart provides a tactical look at the 560-680 range that prices have been trading in for roughly 10 months now. Whether this range will resolve to the upside or downside is unclear, but the presence of a flat 200 day moving average, a bearish momentum divergence, and prices consolidating in the direction of the underlying trend may all be early warning signs of a move lower in the short-term. 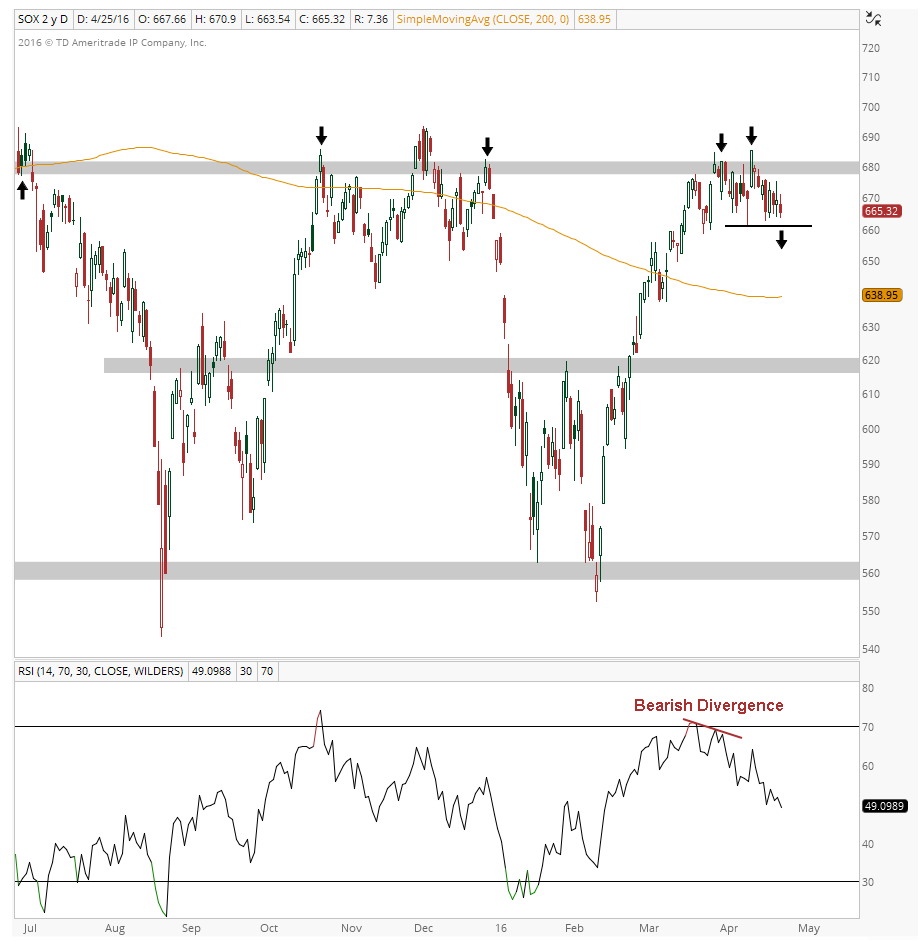 Prices need to see a close below 660 before the evidence confirms further downside and the shorts can get aggressive, while the bulls would like to see further consolidation at current levels or a decisive breakout above 680 before acting. Although the current weight of evidence suggests a neutral / short bias is appropriate, it remains unclear if an edge exists in this market, so let’s see if the analysis of individual components can provide us with additional information.

Below is a chart of the components of SOXX, the ETF that tracks the PHLX Semiconductor Index charted above.

Using this spreadsheet I determined whether each component was in a long-term uptrend, downtrend, or trendless, by utilizing the slope of its 200 day moving average. I then separated the list into two categories, uptrends and flat or trendless, by grouping and adding each components % weighting in the index based the slope of its 200 day moving average. The results showed that the stocks that make up two-thirds of the weighting of the index are in downtrends or are trendless. The fact that only a third of the components are in uptrends suggests to me that a correction through either time or price is more likely than a sustainable breakout.

One name that that has already broken down from its consolidation is Skyworks Solutions (SWKS).

This stock has been in a downtrend on an absolute and relative basis since late last year and is currently trading below a downward sloping 200 day with momentum in a bearish range. A month ago prices reclaimed broken support at 74.20-75.00, but failed to hold above it and have since continued lower. As long as prices remain below 74.20 on a daily closing basis, the stock will likely resume its longer-term downtrend and make a retest of the January lows at 58.50 likely. This is the type of stock we’d want to be selling strength in, rather than buying dips, especially if the sector continues to show relative weakness and ultimately breaks down.

Even some of the leaders in the sector, like AVGO, are acting weak as well. 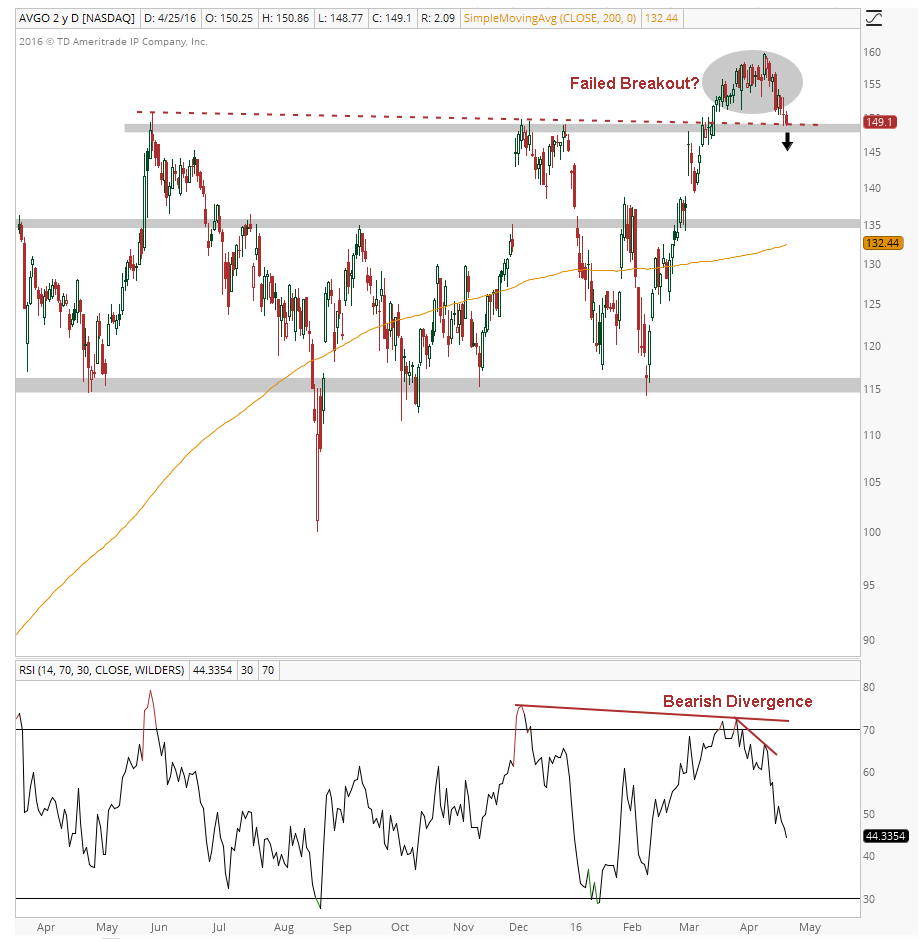 This stock broke out to new all-time highs in late March, but is now threatening to confirm the bearish momentum divergence and failed breakout by closing below the 2015 highs near 148. If prices close below that level, I’d expect a retest of support near 135. With even some of the strongest names of the sector threatening to break down, I think it’ll be tough for this sector to make much upside progress.

For many stocks in this sector constructive behavior would be a continued correction through time to work through the all of the overhead supply in a healthy way, but I think that is the lower probability outcome.

The Bottom Line: The semiconductor index has frustrated market participants over the past month, but the weight of evidence gathered on an absolute basis and by studying the underlying components suggests a directional move may be coming. The majority of stocks in the index are in downtrends or are trendless, which will make it difficult for the index to stage a sustainable breakout of its 10 month range. This indicates a correction through time or price is the most likely outcome.

If the index breaks down below 660 on a daily closing basis, I’d expect the selling to accelerate and for prices to retest the middle of their longer-term range near 620. To express this theme we can either trade the ETF that tracks this index (SOXX) or short individual components that are showing relative weakness, like SWKS, where we’re trading in the direction of the underlying trend, the risk is well-defined, and the risk/reward is elevated. As we enter earnings season, please be aware of earnings dates if you choose to express this theme through an individual stock as risk is nearly impossible to define into an earnings announcement.

At the end of the day this thesis is one that has not yet confirmed, but is one worth keeping on your radar. The weight of evidence has been building in favor of the bears over the last several weeks, but as always, we need to wait for prices to confirm our thesis before taking a position in the market.

JC Here – I agree that Semi’s are a very important sector for this market. We look to chips as a leading indicator for the Tech sector and Nasdaq. I would point to the consolidation in $SOX since mid-March. We’ve gone no where in over a month, which I would chalk up as a positive. Now, the resolution out of this range will be telling. If we break down from the recent consolidation, I would argue that further downside is coming and should coincide with lower U.S. Stock Market prices. Further consolidation near these levels and/or a breakout to new highs would be an extremely positive catalyst. Whether you’re trading semi’s or not, I would keep a close eye on these guys.

Click Here to get regular updates on these charts above, as well as the key levels we are watching to get long or short the U.S. Stock Market, Sectors, and individual stocks. Join us in a more official capacity here.