It seems like every day I hear or read about someone’s opinion on interest rates. The funniest answers typically revolve around the fact that, “interest rates will eventually go up”. Yea? Thanks, that really helps. You mean the Federal Funds Target Rate won’t stay at zero forever? Brilliant analysis.

So now that we know rates will “eventually” go up, we can move on. Because that obviously doesn’t help anybody. What does help is trying to figure out what rates will do in the meantime before they start to rise. Coming into the year, consensus sentiment towards rates was that they were going much higher this year. In fact, the sentiment was at such an extreme that we hit levels not seen since early 2011, just before the 10-year fell from 3.7% down to 1.4%. This led to a 50% rally in shares of $TLT that year, the US Treasury bond ETF. We’ve seen a similar sentiment unwind so far in 2014 as bonds are the top performing asset class and interest rates do nothing but go down.

Here is an awesome chart showing long-term rates in the United States going back all the way to 1790. The point here is that although we “know” interest rates will eventually go up, the process can take a lot longer than some expect. Look at other times throughout history where rates bottomed out. This can take 10-15 years easily and still be a very normal and traditional bottoming process: 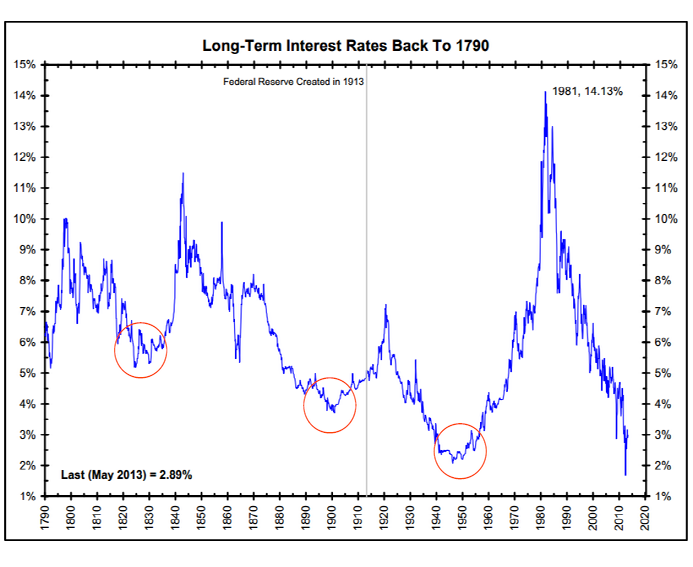 We could be having this same time-wasting conversation about interest rates “eventually” rising years from now. We have no way of knowing. So we’ll continue to analyze price behavior and sentiment levels to allocate assets towards fixed income, and treasury bonds specifically. Worrying about what the Fed is going to do or not do, worrying about how to take advantage of a “rising rate environment” and wondering how rates can keep falling in the face of whatever inflation we may or may not have seems like a complete waste of time from a money allocation perceptive.

I believe the best thing to do here is simply to stick with the trend and not over think it. Rates are getting slammed, money is flowing into treasury bonds hard and we don’t see any evidence yet that this trend is reversing. This chart up above tells us to be patient, give it time, and let it play out on its own. If we’ve learned anything over the years it’s that when interest rates do turn, they will likely trend higher for a long time. So we’ll have plenty of opportunities to worry about a rising-rate environment whenever it does come. For now we’re just not in one. Appreciate it.

REGISTER HERE for more information on how to access our bond and interest rates charts annotated with commentary on a weekly basis.

The Foundation for the Study of Cycles (via @PaulCiana)