With inflation, first it shocks you then it sneaks up on you. That is the way it has played out in 2021. This Spring, when the yearly inflation numbers started to heat up, newspapers ran banner headlines announcing the news and inflation-related Google searches exploded. In the months since, inflation has moved out of the headlines and searches related to it have fallen. What has shown little sign of letting up is inflation itself.

In the latest round of inflation report (for data through July) there was some easing in some niche inflation components (e.g. used car prices) but the overall trend remains higher. The three-month change in the median CPI, which by definition is not influenced by outliers on either end of the distribution, has risen to its highest level in over a decade and the yearly change (which itself was at the highest level in a decade prior to COVID) is re-accelerating. The narratives have shifted from there is no inflation to its here but transitory to its not transitory but its a net positive. The reality is that it is not a positive (for the economy or the market), it is persistent, and after bottoming over a decade ago we are now seeing a meaningful acceleration. 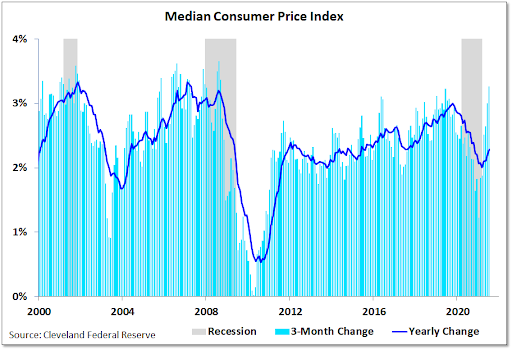