And just like that, we’re almost done with the month of April. So you know what that means? The ‘Sell in May and Go Away’ chatter now begins. Does it work? Does it not work? Should we always sell in May? Why does it work? Where does this come from? What if I’m more long-term? What if it’s a midterm election year? All great questions.

Let’s begin with where this originally came from. The old saying is officially,

“Sell in May and go away. Stay away till St. Leger’s Day”

The inference here is that there’s no point owning stocks during the summer. The big boys won’t get back to business until Horse Racing season in England is over in the Fall. The British have been celebrating this day in September since the St. Leger Stakes (last leg of the English Triple Crown) was established in 1776. In America, we like to call this time of the year, “Football Season”.

So should we listen? Does the math behind this make any sense? I think it does. If you use the Dow Jones Industrial Average and go back to 1950, the statistics are simply staggering. Hypothetically, had you invested $10,000 but only owned stocks between November 1st through April each year, on April 30th of 2013 that $10,000 would have been worth $775,055. That’s pretty awesome. Now, had you done the exact opposite and purchased the Dow Industrials every year on May 1 and sold on Halloween, you would have actually lost $687 over the past 63 years. 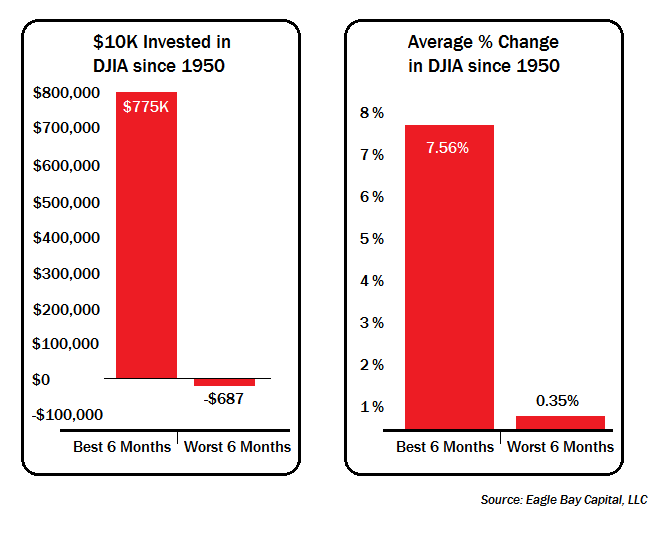 Look at the average percentage moves. You can choose to ignore those numbers if you want. But I like to think that seasonality is against us as we enter the summer season. Call me crazy.

Here is the one-year seasonal pattern from the Stock Traders Almanac. Look at the difference between the pre-1950 period compared with the behavioral patterns since then:

During mid-term election years, the numbers get even worse. Remember, this is traditionally the worst year of the 4-year Presidential Cycle. So the “worst six months” statistics warn us even more. The average return during this upcoming 6-month period on midterm years is -0.43%. The stats don’t lie. Here is the Presidential Cycle Composite chart for the S&P500 going back to 1928. Notice how historically, major bottoms are put in during the Fall of midterm years: 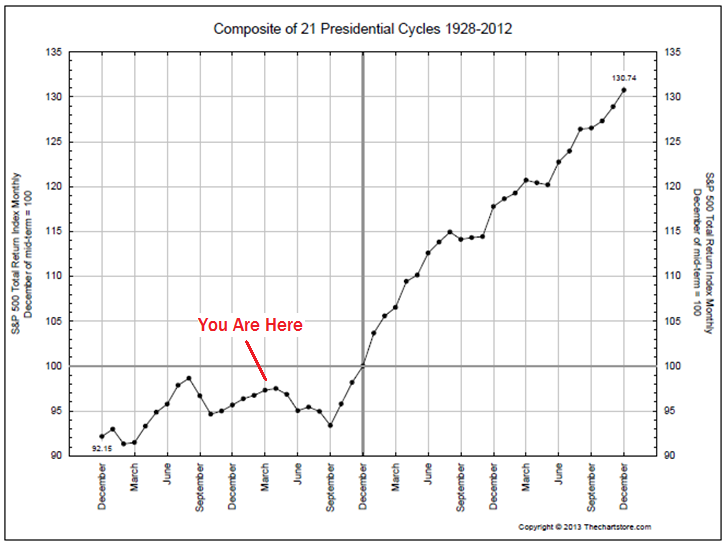 Based on the Presidential Cycle and 6-month cycle, we are entering a period of time where the US Stock market tends to struggle. But if history is any indication, this could be one of the best buying opportunities we’ve had in years. But we’ll worry about that when the time comes.

I’ve been bearish about US Stocks all year long. This is just another feather on the hat for the bears and I don’t see any reason to be optimistic about the US Stock Market Indexes. There will always be individual non-correlated names that do well; that won’t change. But as far as the market as a whole is concerned, I will continue to keep a bearish/neutral stance. At least for now.