Back in January I put up a post about Corn prices potentially ready to soar. We had seen a big triangle-looking formation build from last summer with current prices hovering above last Spring’s highs. After 4 tests of downtrend resistance, we figured that a breakout was coming but wanted to see closes above 735 to confirm. Over the next couple of days Corn got close, but was never able to close above that important 735 level.

After a few weeks of selling and then some further consolidation, Corn looks as poised as ever to do as we hoped for in January. Last Spring’s resistance has turned into support once again, Momentum never reached oversold conditions on this last sell-off. And now the 50 day moving average has not only flattened out, but actually turned higher to go along with an upward sloping 200 day moving average. Here is a chart of Corn Futures using daily bars: 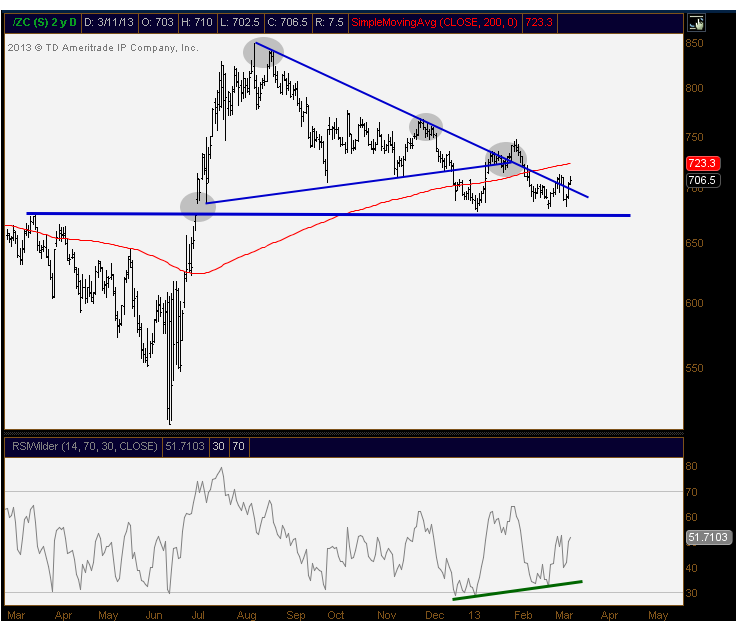 What I like about this setup is that I’m sure I wasn’t the only watching that triangle formation in January. You see what happens is, the chart watchers wait for the breakout, perhaps aren’t patient enough, buy in big amounts prior to confirmation, and then get smacked in the face. In this case, Corn attempted to break above 735 as we had hoped, failed to do so, and then went down 10 straight trading days. So this becomes the old baby reaching for a hot stove phenomenon. They got crushed once, and are scared to get back in. This is the beauty of market psychology. Nothing has changed. In fact, after some more time, Corn now looks even more constructive.

At this point, it’s all about entry points. I think based on 2013’s price behavior we’re heading higher as long as we hold on to the January and February lows that served as resistance last year before the summer breakout. The initial price target is up near 840 around last year’s highs. But looking at the base that Corn has been building for the last 2 years, there is certainly potential for prices to achieve much more than that.

I think for now, we should stick with a) good entry points that provide a nice risk/reward that meets our ideal profile. And b) look to be discipline and take profits at last summer’s highs. At that point we can reevaluate and let it set up again for a potential second leg higher. But let’s worry about that down the road.